One of my good friends texted me last week to ask for help. She’s opting for more meatless meals in 2017 and wanted advice. More specifically, recommendations on products and brands that she should look for when grocery shopping. After a few texts back and forth I suddenly realized that this is something I should do a blog post about. Vegetarianism and veganism are growing in popularity, and plant based diets are becoming more mainstream. It’s never been easier to switch to meatfree with all the mock meat products available. 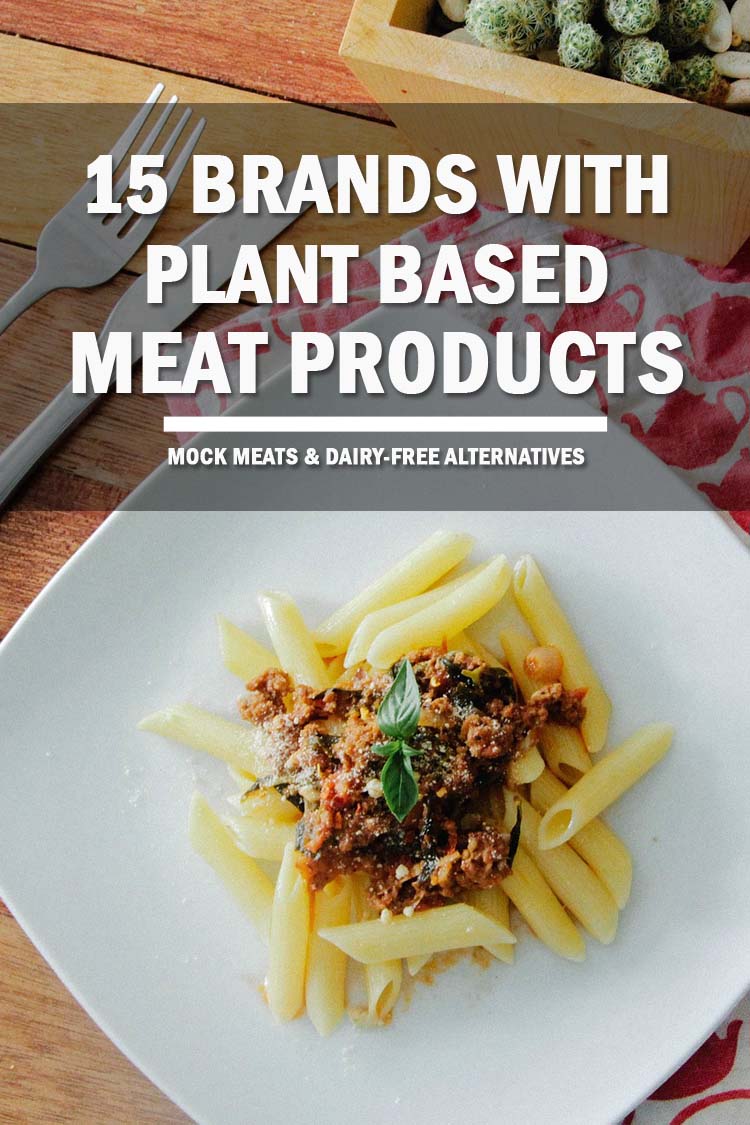 I’ve been Vegan since 2013 and I was vegetarian for 20 years before that. Trust me, it’s easier than ever to skip the meat with mock meat products. So first let’s answer the question I get asked a lot, “why would you want something that looks and tastes like meat as a vegan?”. I’m a vegan for ethical, health and environmental reasons. As such I have no objections to mock meat. Anything that looks, and tastes like meat without the cruelty, cholesterol or damage to the environment is ok in my book. So here are my favorite brands, and products, for anyone interested in eating more plant based diet. NOTE: Not all these products are vegan. I’ve included products for vegans and vegetarians because I’m in full support of anyone reducing their consumption of animal products. We are all at a different place on their journey.

Over the last few years there have been some stand out companies that have changed the public’s opinion on veganism. Gardein is part of that surge in popularity (along with Beyond Meat). This brand is fully vegan, and varied range of mock meat products. From your traditional burger, to fish, crabcakes and beefless tips. As proof times are changing, Gardein is offered in a couple of restaurants near us as a substitute to veganize dishes on the menu. This is a staple in our freezer. Our favorites are the fish filets, chicken scallopini, and pork bites.

Boca was one of the original brands I tried when I moved to America. They offer vegan and vegetarian options so if you prefer dairy/egg free then check the label. Boca are most known for their range of burgers, and meatless crumbles. We used to use their products a lot year ago but since finding Gardein and Beyond Meat we don’t use much Boca anymore. Boca and Gardenburger are available as options in many mainstream burger joints (Red Robins, Islands, Johnny Rockets etc)

If you’ve been on facebook lately no doubt you’ve seen the “best burger in the world… and it’s vegan” video. This Beyond Burger from Beyond Meat is so like meat it ‘bleeds’. Has more protein than meat, without the fat, and without the cholesterol. If burgers are your thing, be advised this vegan burger has fooled the most carnivorous meat eater. Beyond Meat doesn’t stop at burgers though. They have chicken strips, beef grounds to use in recipes. They also recently launched some single serve meal bowls. Again Beyond Meat are another staple in our freezer. Specifically we like the chicken strips and crumbles. Also worth noting that all Beyond Meat products are vegan.

Back when we moved to the U.S.A. in 2001 Gardenburger was probably the veggie burger leader in the freezer aisle at supermarkets. It was marketed as “the original veggie burger”. If mock meat isn’t your thing, and you want your plant burger to look like veggies then Gardenburger might be for you. They aren’t fully vegan, but do offer one vegan burger. Gardenburger patties are available at many food chains which may be one of the reasons they are so popular.

At the Holidays we love our Tofurky roast. A turkeyless roll with stuffing, and mushroom gravy. Oh so good! This was the foundation of Tofurky for years then they expanded. Now you can get their deli slices at most supermarkets making sandwich making super easy! Plus their full range includes hot dogs, sausages, pizza, burgers, sausages and hot pockets. Another staple in our house because it’s ALL vegan, and we love their italian sun dried tomato sausages, roast, and turky slices. The pizza is also amazing but more tricky to find.

This is another company that’s been around a long time. Yves are mostly known for their hot dogs, deli meats and ground rounds. If bologna or ham is your preferred deli meat then Yves is definitely worth a look. In July Yves and Light Life hot dogs are on our shopping list to celebrate Independence Day. Which is also, incidentally, the only time of year we have hot dogs. Also, for those home made pizzas, they do a mean vegan pepperoni.

Offering vegan and vegetarian products Sweet Earth are in my opinion a “one to watch” in the companies offering mock meat. They offer a variety of products including seitan, grounds, burgers, bacon (OMG benevolent bacon is AMAZEBALLS!), sausage, and prepared meals like burritos and artisan bowls. We love their benevolent bacon. Seriously so good. I also love that they truly have a passion for the animals and the planet. If you want to see their impact you can go see their mission eco-clock for the animals saved, water conserved, miles not driven, energy saved and greenhouse gases avoided. It really puts into numbers the impact a meatless diet can have on the environment.

When we originally tried Field Roast, we tried their celebration roast as an alternative to Tofurky one holiday. Since then they’ve introduced more and more products under their brand including one of our favorites, their apple and sage sausage links. So freaking good! All the Field Roast products are vegan, and are all soy-free. Along with roasts, and sausages they also have burgers, deli slices, meatloaf their new vegan cheese called Chao. Incase you don’t know vegan cheese is gonna be super popular in the upcoming years as more people turn away from the dairy industry and to cruelty-free options. Especially if the whole “Gary” incident in the UK is anything to go by. My facebook feed blew up with UK vegetarians and vegans upset that the “Gary” had sold out so quickly in stores.

Offering vegan and vegetarian items LightLife is great for deli meats. Tempeh, sausages, hot dogs, chick’n, breakfast, beef crumbles, and burgers. One of our personal favorites is the Gimme Lean Meatless Sausage. Great for breakfast patties, sausage rolls, or adding as a replacement for sausage in any recipe. Each serving has 7g of protein, 7g carbs but with ZERO fat and cholesterol. This makes it a winner for anyone wanting to reduce their calories, without reducing the flavor! Ideal for this time of year! 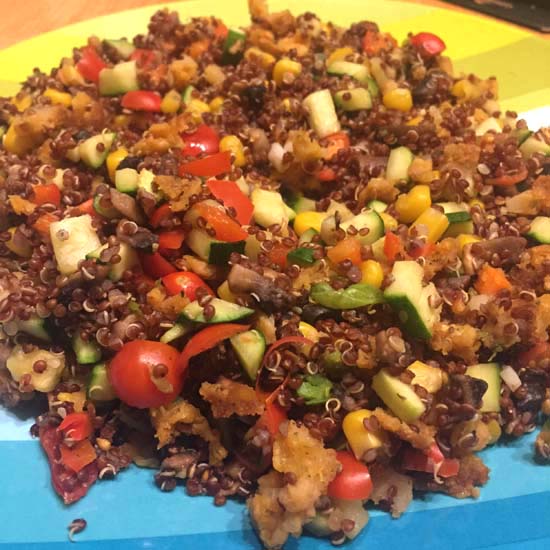 Along with Boca and Gardenburger, Morning Star Farms were one of the brands that were leading the way for vegetarian and vegan products. A good majority of their products are not suitable for vegans, but great for vegetarians.  Anyone ok consuming dairy and eggs, I suggest checking out their chicken nuggets, tomato & basil pizza burgers, and their bacon. For vegans I suggest their Hickory BBQ  Riblets. Again another 4th July favorite. I also like their spicy indian veggie burgers.

Back when I was vegetarian and living in England our favorite mock meat was Quorn. When we moved to the US we discovered it wasn’t available. Then they launched Quorn US! Huzzah, we could eat Quorn again.Once I became vegan I could no longer eat quorn as it contains egg. Then last year they announced a vegan line and Huzzah, again! Quorn is to date the most realistic chicken alternative I’ve had. As I write this they have five vegan products available, but I have no doubt they’ll launch more. They do a lot of products for vegetarians. Our favorites included the cranberry and goat cheese cutlets, burgers, strips, grounds, meatballs and the top pick the turkey roast.

I’ve mentioned I was vegetarian for 20 years. In that time I tried twice to go fully vegan and the one thing that always slipped me up was cheese. We dumped dairy milk in favor of soy or almond, but man cheese was a tough one! So addictive. Literally! Well have no fear, because it’s easier than ever to skip the dairy with Daiya plant based dairy-free products! First they were just non-dairy cheese, then they became every vegan’s dream As now we can get fully vegan cheese, cream cheese, pizza, cheesecake, mac’n’cheese, yogurt, and dressings. Seriously, if Daiya and Gardein had been around the first time I experimented with a vegetarian diet at 14 years old I would never have looked back.

Paving the way for Daiya was a brand called Follow Your Heart. Most people find their products first, but we found the restaurant first. Just a 30 minute drive from our house this vegan/vegetarian market and cafe offers delicious food to eat in, take out, or cook at home. Initially the became known for their vegan mayonnaise. Over the last few years they launched more products including dips, spreads, dressings, cheese, and their latest stroke of genius: Vegan Egg! Totally plant based, plus they are solar powered.

Just like any food supermarkets tend to offer their own ‘store brand’ generic versions of products. Trader Joe’s does some vegan products that are remarkably like Gardein holiday roast, Gardein mandarin orange chicken, and Gardein chicken tenders. Plus they do AMAZING vegan ice cream! Whole Foods also has their own veggie 365 brand foods, like burgers and meatballs. Ralphs/Kroger were very like Gardein or Beyond Meat burgers and crumbles. Vons, costco etc also do their own veggie versions. Really it’s never been easier to choose the meatless option.

To round up to an even 15 in this list (thanks OCD!), I’m going to do an honorable mentions. There are a few brands that didn’t make the cut as a stand alone brand but they offer Vegetarian and Vegan items. Like Amy’s for pies, lasagne, soups, bowls, burritos and more. So Delicious does amazing plant based milks and ice creams, heck if you’re hedging to ice cream then Ben & Jerry does vegan ice cream that’s sinfully delicious! Of course Silk does a great dairy free alternatives too, including milks and yogurts. Linda McCartney brand (UK), Loma Linda, Worthington and so many more.

I really hope this list serves as notice that a meatless meal is super easy, and with the mock meat you won’t miss the meat. One thing I want to bring back to the blog is reviews of meatless products. Whether it’s a straight up review, traditional recipe hacks using mock meat, restaurant review or meat free recipes. Adapting to a meatless cruelty-free lifestyle is super easy, healthier, and so much better for the environment. If you haven’t watched Cowspiracy yet, please check it out!

No Excuses, No BS, Bootcamp!
Next Post: 5 things to look for when joining a gym