When we lived in England I was vegetarian so I knew that vegetarianism was big in the UK, so many stores and restaurants catered to veggies. In fact for a long time vegetarian food ranges in the UK was far superior to those in the USA. However when I opted to go 100% plant based five years ago, I noticed vegan food in the UK appeared to be lacking. Thankfully in the last 18 months there has been a shift of availability and awareness. I decided that I’d split my plant based culinary adventures into two posts, this first post will focus on vegan food in Derbyshire and the second post will cover London. 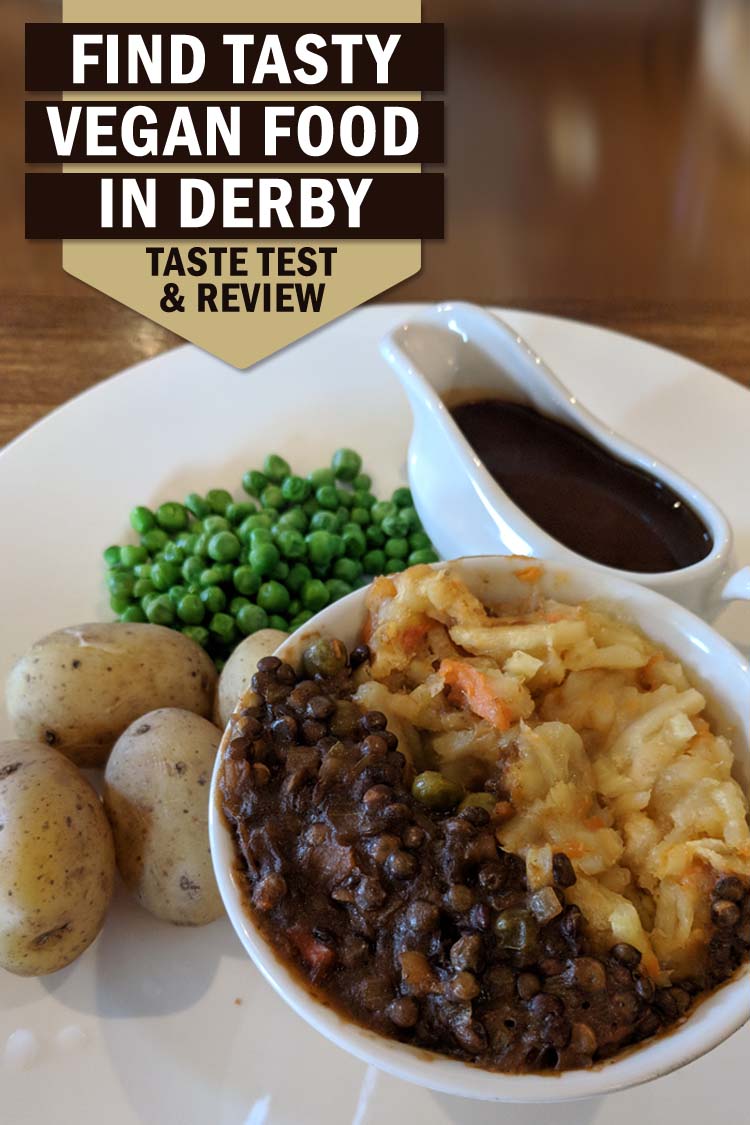 I grew up in Derby, in the middle of England. The heart of the industrial revolution. While California is now very much my home, trips to visit family and friends are made much easier with the dramatic rise of vegan menu items. Even year on year, this trip we had way more variety of vegan options to choose from.

From Supermarkets, health food stores, small cafes to large chain restaurants veganism is trending in the UK right now. Thank heavens too. Nationwide it seems Supermarkets are keen to get in on the action with stores competing for an ever growing piece of vegan pie. If you have access to cooking facilities your ability to eat plant based will be easy with all the options in stores but if you are eating out here’s some suggestions. 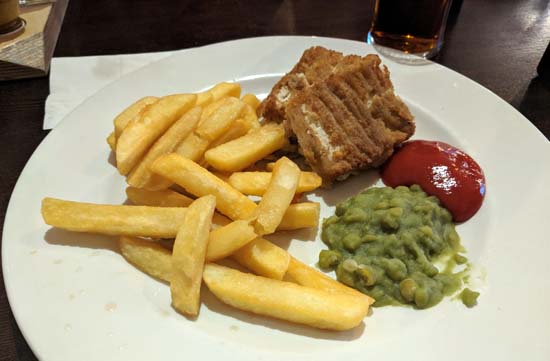 This is the pub nearest to my parents house and a little nostalgic for me as I used to work here back when I was 18/19. Previous years when we’d tried to find vegan food in Derbyshire we’d only found one or two places to eat out but now even pubs are joining in on the vegan revolution. We went to The Paddock twice. The first visit was out first night in England and we opted for the vegan ‘fish’ & chips. The second visit was on our last day in Derby and I opted for the falafel burger. Both were tasty vegan options.

We had a couple of trips to Wagamama’s during our trip, they have locations nationwide. Our first experience at Waga’s though was in Derby, at the Intu center. Overall I liked it, we managed to nab a booth so it was a little more private. I am not a fan of the long tables. One definite plus was that they have a specific vegan menu online so you can see ahead of time. We chose the Yasa Gyosa, and the Vegatsu curry to share. For beers I saw the Lucky Buddha beer and knew immediately I had to have one. The bottle was so amazing, I wanted to bring it home. Great food! 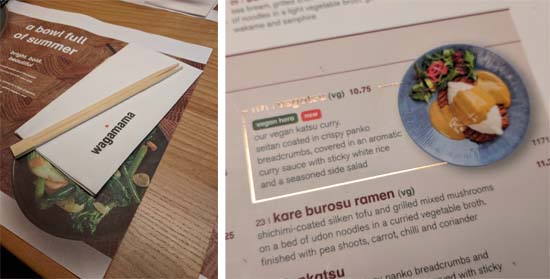 One place I’ve enjoyed eating at on previous trips is the Toby Carvery pubs. Over the years they’ve had some great vegan options, and failing that they offer a meat-free carvery where for just a few pounds you can enjoy all the steamed veg and roast potatoes you could want, smothered in vegan gravy. I really enjoyed the  Portobello Mushroom Tart I had but the roast potatoes are where it’s at for me at the Toby Carvery! 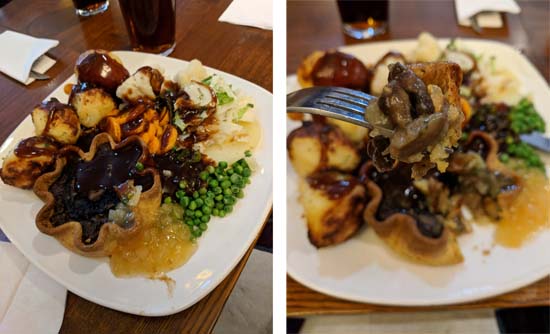 On our visit last year we stayed in Belper, a small rural town in Derbyshire. My parent’s discovered a small vegan cafe in Belper called Vegan Revelation. Located inside an antiques shop it’s an amazing eclectic little place that is full of mismatching retro furnishings and I loved it. We took the family and had an assortment of dishes. I opted for the ‘dirty linda’ which was a vegan sausage cob with mushrooms and onions. Naturally I spotted the vegan cakes and had to sample a slice of the chocolate cake too. 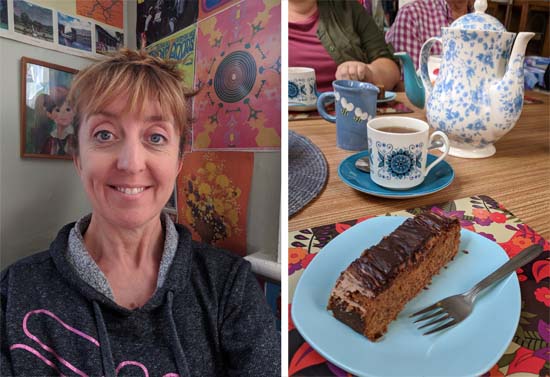 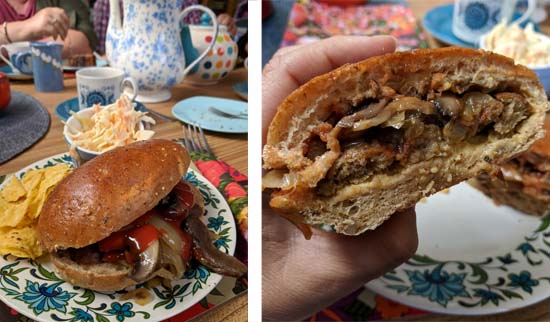 When eating vegan in Derbyshire, one place that always deserves a visit is The Quad in the heart of the city centre. This is a great place to meet up with old friends, grab a cup of tea, check out a movie, or view an art display. They have a specific vegan menu with many items to choose from. Our favorite, that never disappoints is the Burger with a Bucket of Chips. The food is amazing and they even had a vegan dessert this year, a orange and chocolate tart. 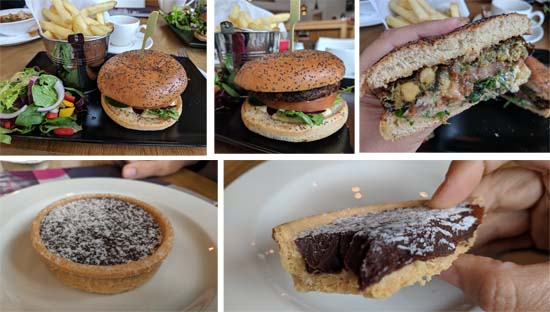 The Oak & Acorn is another pub in Derbyshire that is now hosting vegan options on the menu. We’d decided to walk to the pub via a nature reserve so we were definitely ready for food, and we not disappointed. I opted for the Lentil and Parsnip Cottage pie: Seasoned lentils topped with parsnip mash served with baby potatoes, peas and vegan gravy. It was delicious! 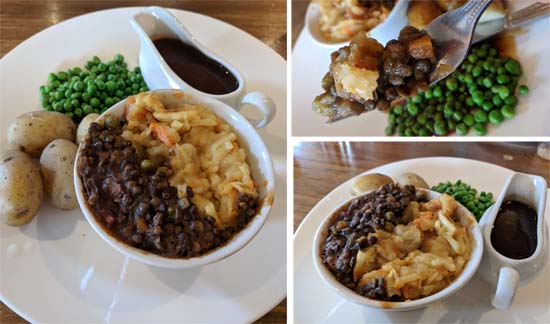 While we were in Derby we celebrated our 20th Wedding Anniversary. This was not planned, just a coincidence. We decided to ditch the families for this day and spend the day together just the two of us. A search for “vegan food in Derbyshire” on google showed us the Carnero Lounge so we headed over after a cup of tea at the Quad watching the Derby Pride march. Bonus, they had a vegan menu which has won the coveted “best vegan menu” PETA award. 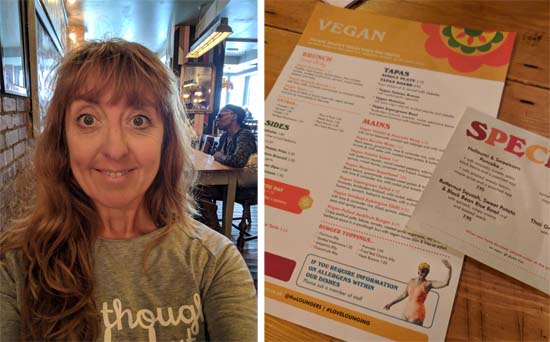 By this time in the trip we were both craving our typical California life food (Mexican). Bob opted for the Mexican Super Bowl and I went with the special: butternut squash, sweet potato & black bean bowl. I really enjoyed the explosion of flavors, and boy did I miss black beans! Plus because we were in England we went with a side of chips. The chips were served in a mug which was a fun touch. Overall I liked the place and would definitely go again. For locals they are also dog friendly! 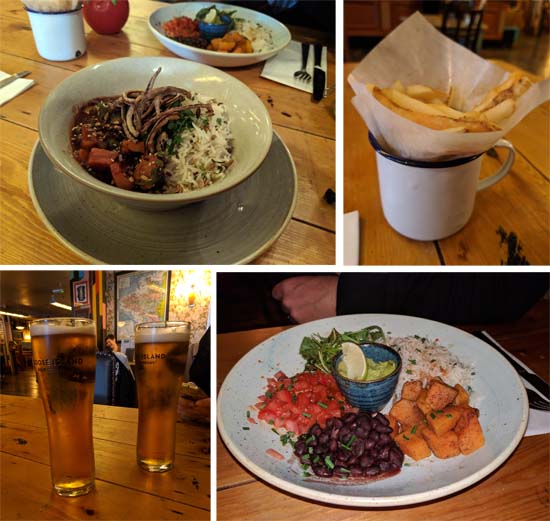 For our Anniversary dinner we wanted something a little different. Eager to try new places Bob suggested Zizzi Italian restaurant in the Intu Center. This place drew our attention for its extensive vegan menu. The restaurant was very busy but we took our time. We started the meal with a couple of appetizers and a bottle of bubbly. I loved that the meals had a little [VEGAN] sticker on the plate, and promptly stuck it onto my bag. Repping the vegan life, while eating vegan food in Derbyshire! 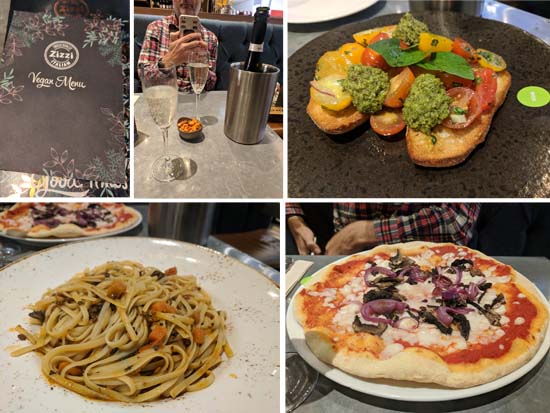 The main courses were delicious, but the real stars of the evening were the desserts. They had a few different vegan options for dessert and I chose the vegan dessert calzone while bob had the Sticky chocolate praline torte. Both were delicious. The calzone was full of warm banana and raspberries, and was divine! Thoroughly enjoyed every bite.

When I went Vegan five years ago finding vegan food in restaurants outside of London (and other major cities) was tough. Things have changed a lot in the last 5 years. Seriously eating vegan food in Derbyshire is super easy now. Our inflight vegan meals with Air New Zealand were almost exactly the same as last year so go check my 2017 post out if you’re interested.