It’s all photo’s today 🙂 So I mentioned we have Kongs and how they are AWESOME if you want to keep your dogs quiet for a little while, well lately I’ve been doing a lot of research in how to help Sky use her brain more, train her more and basically try to wear her out now that she’s an only dog. So enter the buster cube for her kibble and Kong for her treats. However I have been looking at different ways to use her Kong. Previously I’d just smeared peanut butter on the inside, or filled the kong with dry treats and chopped carrot but I saw that mashed potato works well as a filler and after a long afternoon walk I decided to try it.

We had some mashed potato left over in the fridge from a meal a couple of nights previous and I figured we probably wouldn’t use it so why not make use of it rather than throw it out! I took out about 1/2 cup of potato and microwaved it for about 30 seconds to take off the chill and make it more “mashable”. Then I cut up some RAW carrots (cooked would be ok too!) and mixed it together. 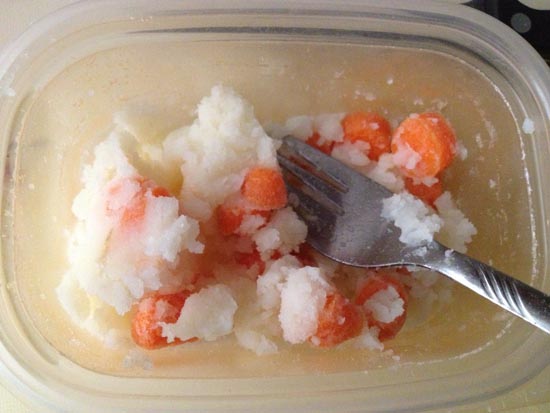 I took a small biscuit and put it at the bottom of the kong as there is a small hole that the potato mixture would seep through, then took a small spoon and spooned it all into the kong. This was pretty messy! Honestly I may just use my fingers next time, it would be easier! 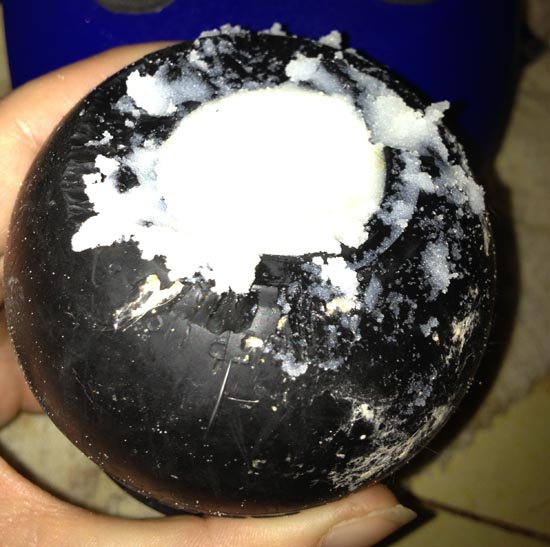 Then I just let her have at it! Success! She LOVED it! Emptying it took a while, and was probably better for her than the peanut butter everyday (and cheaper!). I think I’d rather her have sweet potato than white potatoes but I had them leftover so whatever… I may start doing this with lots of our leftovers now (and cut down her other treats! Remember it’s STILL food!). Dogs always look doped up licking food out of the kongs… seriously I have 100’s of photo’s of them licking food from kongs and they almost ALL have this expression! Dopey dogs! 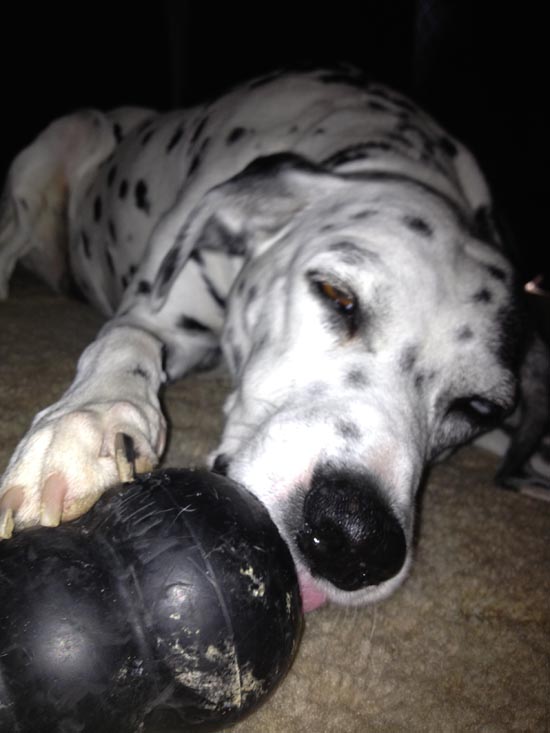 I will say that it kept her quiet for about 30 minutes. Probably longer if I’d frozen it like some sites recommend. But really I think that would be better in the Summer… not winter. I’ll be experimenting with different Kong fillings but so far potato and carrot = 2 paws up!

Remembering our River Roo Roo this week with a Kong pic of her own! River absolutely LOVED the kongs. Peanut butter was her favorite. She’d lay down and grab the kong with her feet and just go to town with it. Seriously the licking noises of both dogs would drown out ANY conversation!!! I loved to photograph them both licking the peanut butter and got some CLASSIC photo’s which I’ll be sharing as the weeks go on, but this is the usual pose. Licking, eyes closed, lots of drool! Heaven! 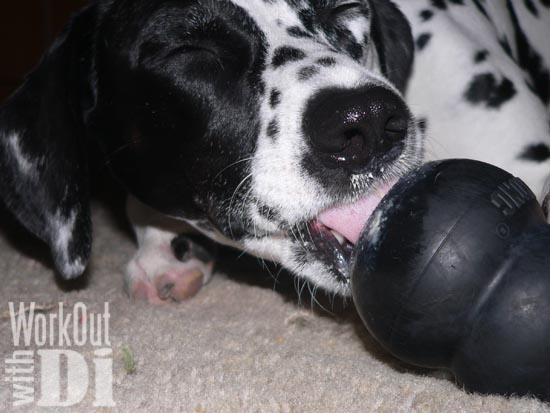