Part of my new blog format is helping instructors out a little, providing tips, tricks, info and playlists. As such I thought it would be fun to provide a playlist each month. 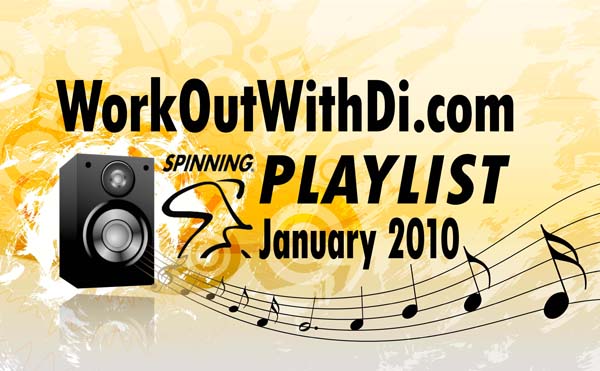 The spinning playlist #1 is a refined version of the first playlist I did back in May 2010. I have a pretty eclectic taste in music, and I like my spin classes to reflect that. I’ve had great feedback from classes regarding my music and I’m always open to trying different songs, different styles and mixes. This mix features songs new and old, and from genres ranging from rap, rock, dance and metal! I think this also means that there is something for EVERYONE on every playlist I create.

Basshunter – Now You’re Gone. We start of with a nice upbeat song, with a great beat! For this one we start off nice and easy with low resistance moving through the positions to the beat. I generally don’t use any timing just when it feels right, the beat kicks in to tell you when to boost it up a little. Usually when I’ve done with teaching points for the previous position.

Taio Cruz – Dynamite. Add a little resistance here for a small climb to get us ready for the heavy work ahead. Mild/Moderate resistance, adding 2-3 turns for switchback during the chorus in 2nd. Then release the 2-3 turns for verse and back in the saddle.

Fragma – Toca’s Miracle. Still climbing here but leveling off throughout the song. Starting heavy from the last song so let’s release a turn or two, and in we start in the saddle. at 1:14 your gonna come into 3rd for 15 seconds, then into the saddle releasing the resistance a notch, repeat into 3rd at 1:59, saddle at 2.29 releasing resistance again, 3rd at 2:43, saddle again at 3:14 to the end of the song.  Listen to the song you’ll FEEL it!

Simple Minds – Alive and Kicking. Tell them to hydrate here, they are gonna need it as we head into seated flat, hard and heavy. Starting with some resistance from last song we add here to make it moderate climb to start. O:58-1:14 ADD ADD ADD, make it at least 3 turns, we’re gonna be cycling through mud by the end! Plus the chorus makes you wanna push it so make it LOUD! Push again adding resistance at 2:20-2:42 and pushing through the chorus, nearly there one more push! Last push comes around 4 minute mark, usually I just tell em to add it all, but I’m evil like that, it’s only 30 seconds!

Kim Wilde – Kids in America. Time for sprints in the saddle! This song just screams sprints. Start with a little resistance to take out the bounce when you sprint, nice and easy pace. Sprint 0:45-0:55, easy pace getting ready for longer sprint (yeah they increase each time) 1:30-1:54, back in the saddle to recover, then last sprint 2:27-2:53 (up to you here, generally I keep them sprinting till the song ends so another 20 seconds).

Vanilla Ice – Ice ice baby. Straight into moderate resistance for jumps on a hill. At 24seconds we head into 8 up in second then down in the saddle for 8, then 4’s, 2’s, 1’s, repeating throughout the song. If you know the song (who doesn’t?) you can tailor the number to the verse/chorus, that’s how I usually teach it doing 1’s throughout the chorus. Good thing is you don’t need to verbally cue much, use hand signals, which gives your crew a chance to get into the lyrics  and rhythm.

Bronski Beat – hit that perfect Beat. Into a flat here, finally some relief. We’re gonna alternate between saddle and running on a flat/ jumps. I’ve done both and each works, I switch it up intervals at:- 0:47 – 1:15, 1:43-2:10, 2:34-end. If you do jumps I let them decided their own rhythm making it great for beginners.

The Fray – how to save a life. Cool down & stretch

Hope you like the playlist and at least get some inspiration, or find one new song that helps with your spinning. Let me know what you think of the playlist and songs or even the format I chose for the songs. Everyone teaches differently so it’s good to see what we are teaching differently to each song.