Interested in checking out the top tourist attractions in San Francisco, but entry prices got you beat? Want to ride the cable cars all day without mortgaging your house? While visiting San Francisco recently I discovered a wonderful thing called CityPASS. This is a booklet that lets you visit some of the cities major attractions for a heavy discount. CityPASS is available in a few major cities In USA so worth checking out if you’re traveling. The San Francisco CityPASS is so worth the value I received from it that I needed to tell everyone about it. 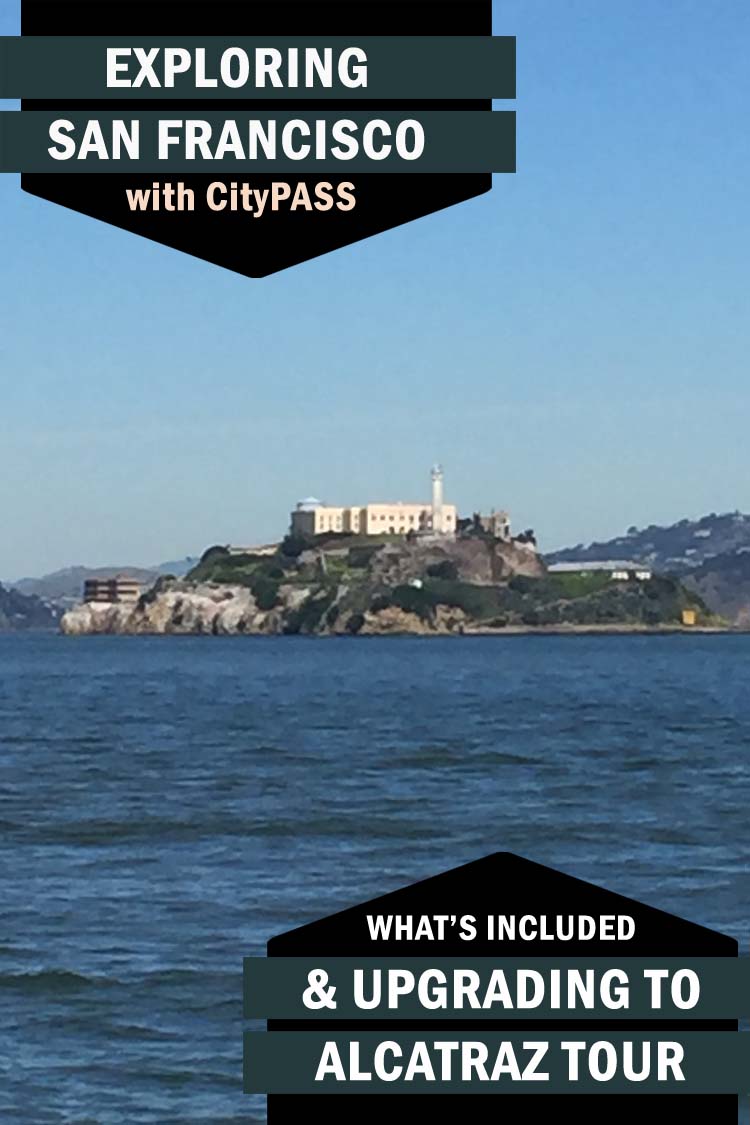 The San Francisco CityPASS package is a 44% discount on the price of individual entrance to each of the attractions. However I was still on the fence. Then I found out that I could exchange the Bay Cruise Adventure and switch to an Alcatraz tour! While I would have loved a cruise around the bay the chance to walk through the walls of the infamous Alcatraz was much more attractive to me. In addition, I’d had Vertigo earlier in 2018. As a result I wasn’t thrilled at the thought of spending over an hour on a boat. A short 10 minute boat ride to Alcatraz I could handle. 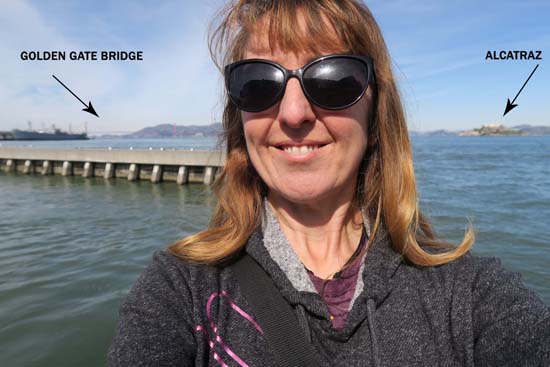 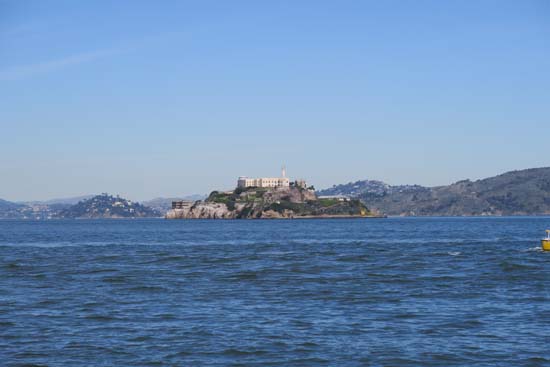 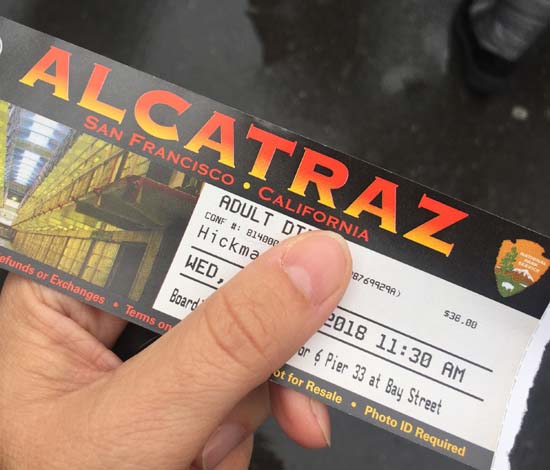 The San Francisco CityPASS upgrade to the Alcatraz tour is a little tricky in that it’s in small print on the CityPASS site. Basically it involved buying the CityPASS from the Alcatraz Cruises website and booking your tour time for Alcatraz and doing that attraction before the others. I called them Tuesday night and booked onto the Wednesday morning tour. The process was really easy. I headed down to Pier 33 the next morning and picked up my CityPass booklet, and exchanged my Cruise ticket for Alcatraz tour and hopped on the boat to the island. The skies were grey. It was cloudy and windy. 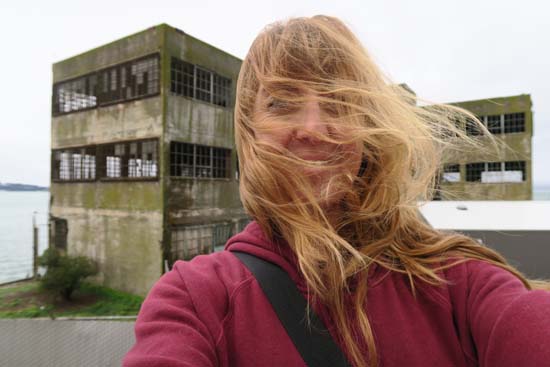 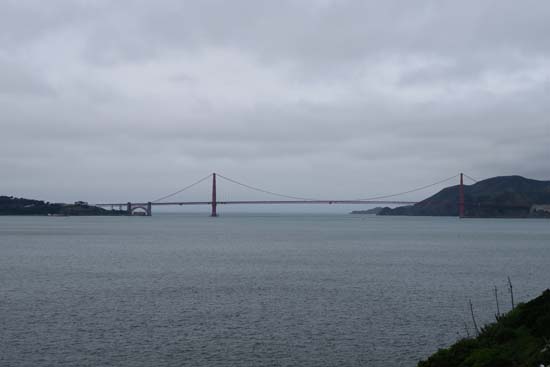 I should preface this with the disclosure that I love the macabre and slightly dark and twisted. So visiting Alcatraz was a no brainer. I am the kind of person that would have LOVED to visit at night (they do have night tours but they are not included in the San Francisco CityPASS). As soon as you step off the boat onto the island you feel the isolation. The view of the bay, the pier, the Golden Gate bridge and you know the prisoners never saw this view. The few that earned jobs were able to leave the cell block and walk to the workshop and glimpse life on the mainland. I’m not sure which was worse. Knowing the World is outside but not being able to see it. Or seeing it and not being able to get there. 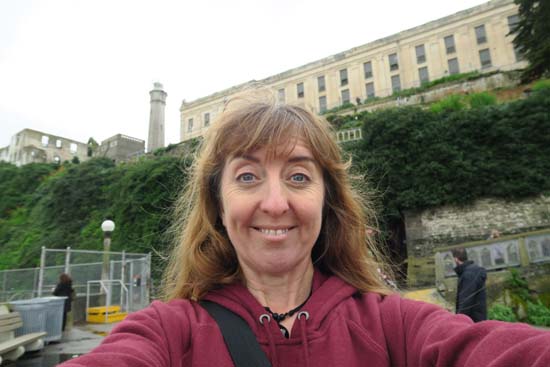 New inmate on The Rock.

The tour can be self guided or there is an audio tour at no extra cost. I chose to walk around a little first checking out the workshop, gardens and courtyard. It was crazy to see that the remains of houses on the island where the guards and their families lived. In fact there used to be around 300 civilians, including women and children, living at Alcatraz. There also used to be a convenience store and bowling alley for the staff and their families. 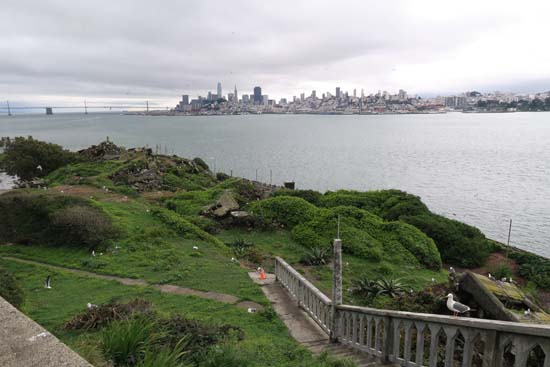 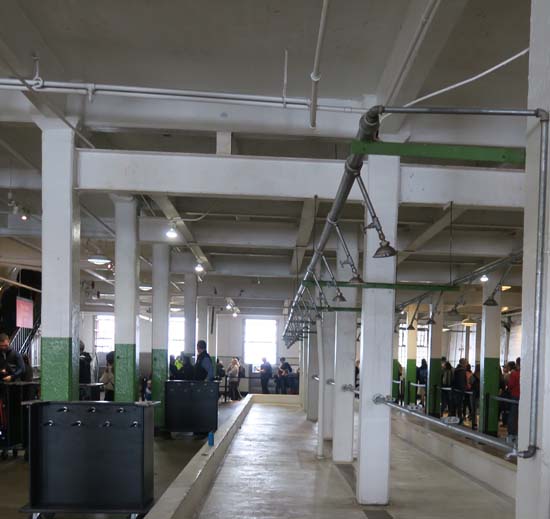 The tour starts you out in new prisoner intake, in the lower level shower room and supply area. New inmates arriving at Alcatraz would first be showered, given  meagre cell supplies before heading up the stairwell to the main cell block. 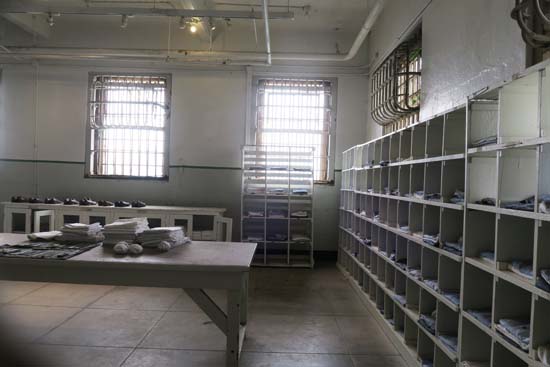 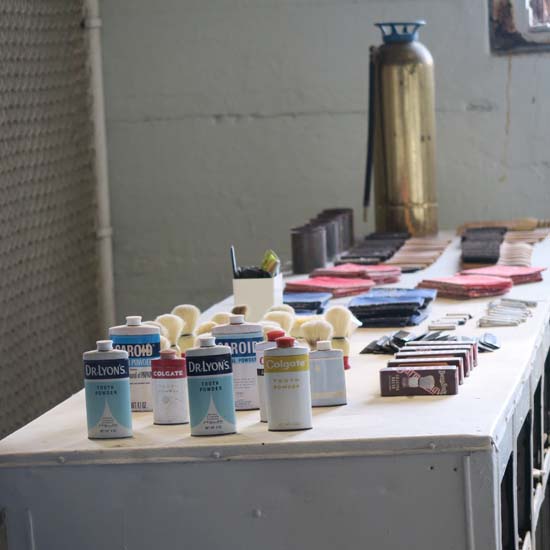 The tour guides you through the main prison building taking you around all 4 cell blocks, the courtyard, library, officer areas, and dining room. 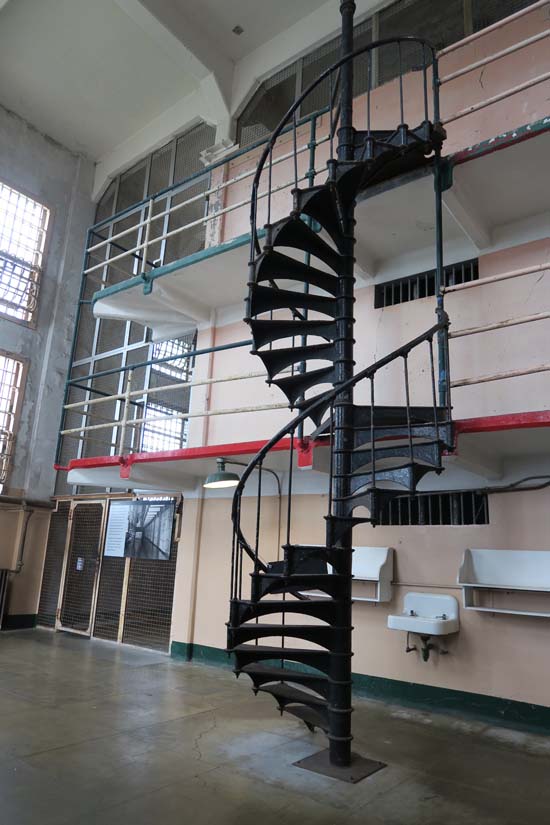 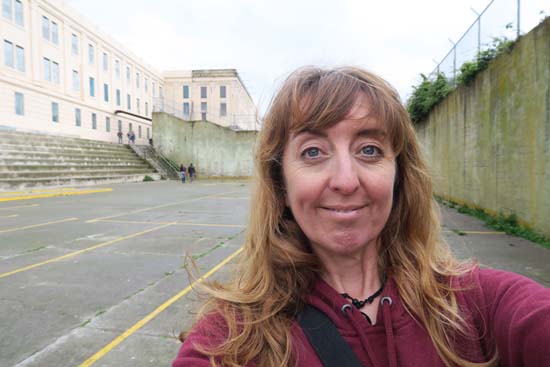 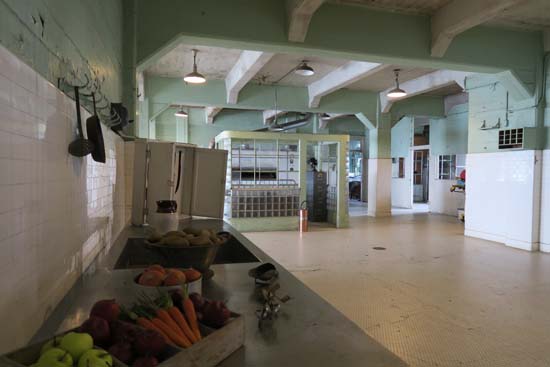 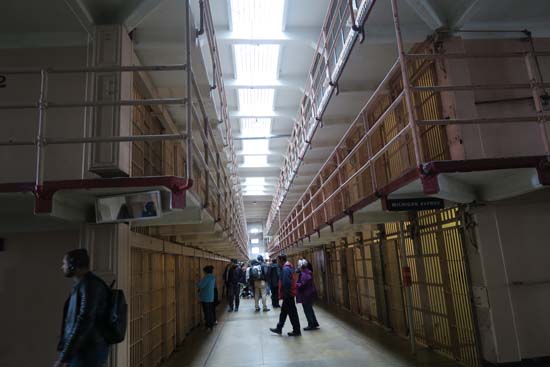 If you were claustrophobic this would not be a great place to visit as the cells are small just 5 feet wide, 9 feet long and 7 feet high. Each cell had a toilet, small sink, and a bed. Only being allowed out for meals, inmates would be confined to their cell all day. In addition to mealtime inmates  could earn time outside in the exercise yard, or working duties. Most noteworthy though is that unless you earned that right 95% of your day would be in the cells. 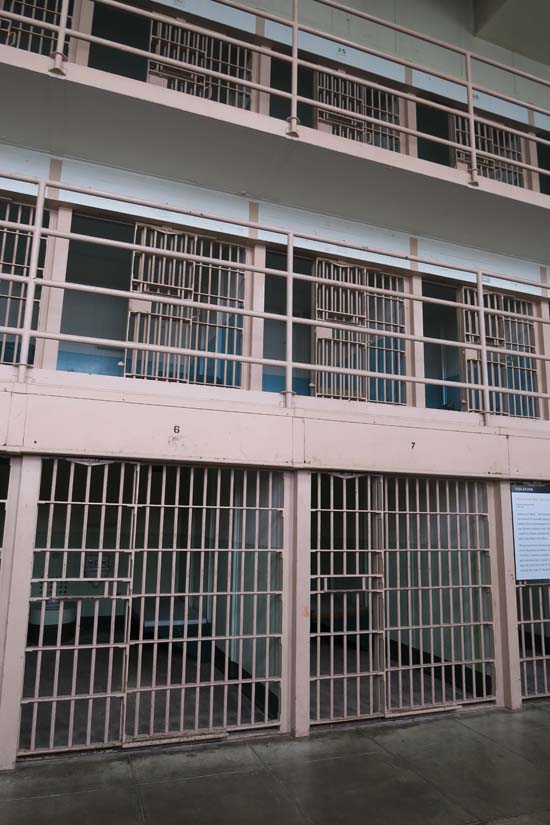 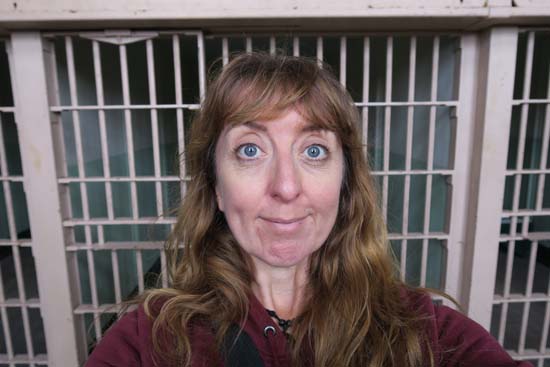 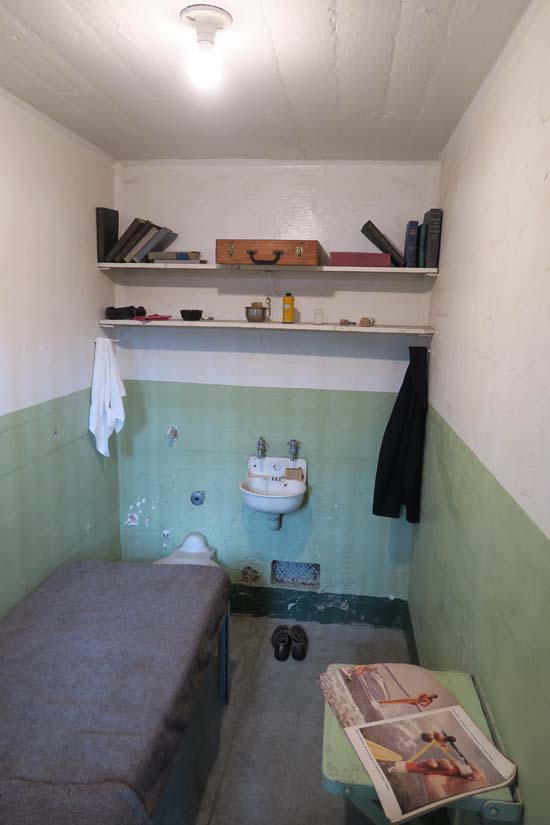 There are 336 cells in total. D block has 36 isolation cells and 6 solitary confinement cells. A few of the cells were decorated, but most are derelict. There are some you can walk in and get a feel of life in a 5×9 cell, including the solitary confinement cells! These are often called “the hole”, same size to the regular cell they differ in that they are completely blacked out, because instead of bars there is a solid door. 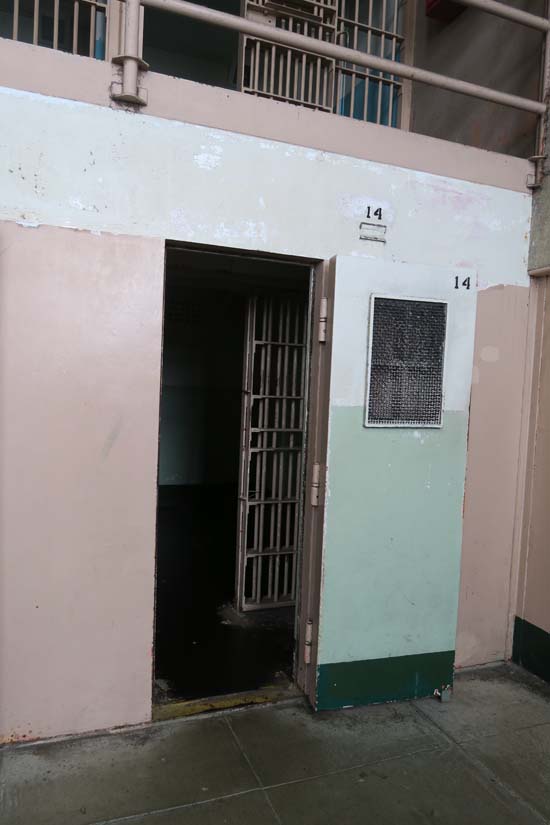 The whole place has an eerie feel to it. It feel miserable, and yet oddly calming. I’m sure it’s completely spooky at night! In all it was an amazing place to visit and highly recommend it. If you’re getting the San Francisco CityPass it’s definitely worth the upgrade. It costs the same, but you get much more of an experience.

Would you have picked the Bay Cruise or Alcatraz Tour?

Have you heard of CityPASS before?

Do you think you’d like being in such a small space for 23 hours a day?