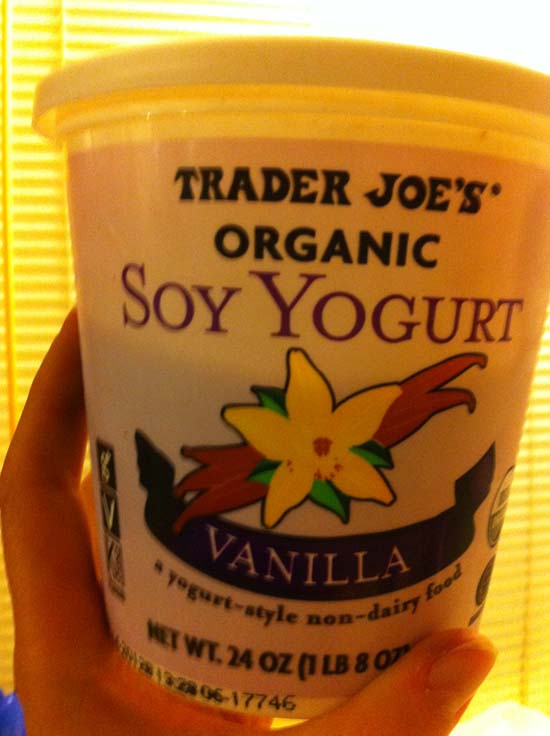 So recently I tried to go vegan, I’ve been vegetarian for 20 years and figured it was time to take the final push. That didn’t work out so well but we tried some new foods and I figured they deserved a proper review. I reviewed the cultured coconut milk previously and this was the other desert option I tried. Listed as Vegan and Gluten free right on the container this Soy Yogurt caught my eye immediately on our vegan shopping trip. I picked up this large 24oz vanilla, and a couple of smaller 6oz containers (apricot & strawberry). I like the flavored ones on their own but if I have fruit I like vanilla 😉 On this occassion I had strawberries with carob chips. 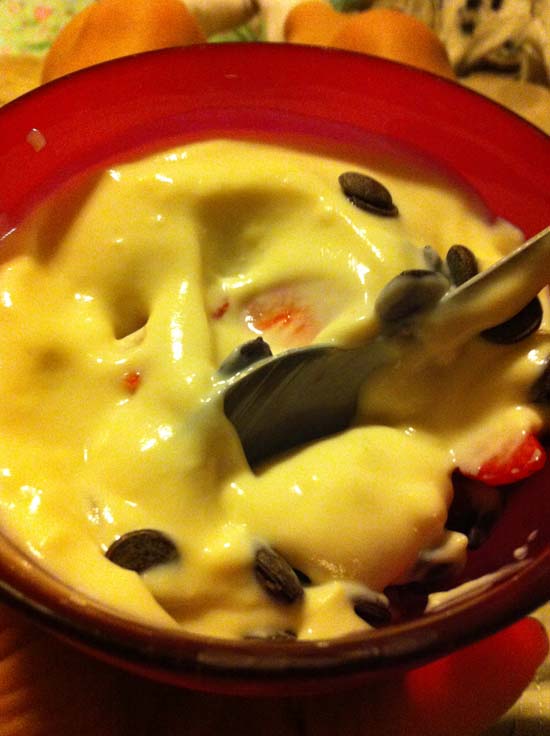 The texture is definitely similar to regular flavored yogurts, as is the taste. A lot of that is from the flavoring I guess. I preferred the strawberry over the apricot, and both those over the vanilla. Never been a big vanilla fan, I prefer unflavored “natural” to allow for the real fruit flavor but that it seems wasn’t an option 🙁 The strawberry was quite nice though! Serving size was definitely enough for a late night treat. They definitely satisfied the late night munchies which is usually when I eat my yogurts, while Bob tucks into ice cream.

My only misgiving is that they are similar to the flavored brand name yogurts, and usually I don’t eat those. As I said earlier my preference is for the thick natural greek yogurt maybe with with some fruit and a sprinkle of nuts. Or I’ll whip up a smoothie with it. These were much runnier than the greek yogurts so for me it was a big change. Again as I mentioned in the vegan post they were more processed, more than the greek yogurt, which honestly I had misgivings about. I’m trying to eat clean, and this seemed like a step backwards. Perhaps if I were vegan I’d accept it, however right now I’m not. The whole reason I chose yogurt as my night snack was due to the clean ingredients (compared to ice cream), and this did seem like soy ice cream would be a better choice both taste, texture, satiety and would be more emotionally satisfying 😉

Would I buy them again?

Yes. I’d buy the strawberry and apricot ones again for sure. The larger vanilla one, I was bored with after two servings, then had 2 more in the pot that had to be eaten because it was open 🙁 The smaller sizes I would buy again occasionally though as a switch up to my Greek yogurt (I still have 2 soy apricot yogurts in the fridge so that’s a good thing!). If I were making the switch to a vegan lifestyle permanently these would definitely be a regular shopping card item! Price wise they were a little more expensive than the Greek yogurt I would normally buy but then comparable to regular yogurts like Dannon which they are more like, the price was probably comparable.

Have you tried soy yogurts? What did you think?