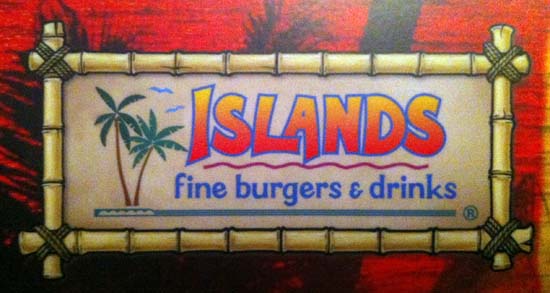 Saturday night for us is date night. Sometimes we stick to places we know, sometimes we go somewhere new, recently one of those new places was Islands Restaurant. Not that new to our area but new to us. I actually fancied going to Red Robin, craving burger and fries, and Bob suggested we try Islands as somewhere new 🙂 So off we went! We’d had a long day and it was date night which meant: BEER! I had the pale ale, Bob had the dark ale. Yes I had the bigger one 😉 Bob was driving! 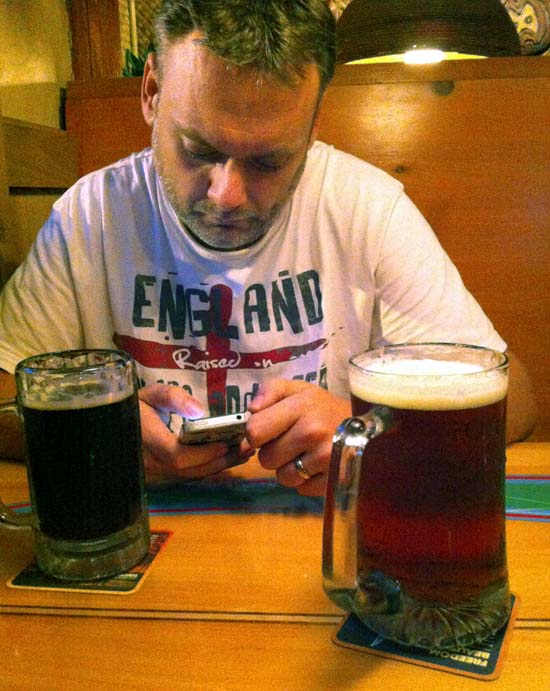 Upon looking at the menu one thing was clear, CALORIES! I’m a self-confessed health freak and yes I think about the calories in the beer but justify it as my once a week “blow-out”, and the same goes for food on date night, within reason. When we looked at the menu though, as fitness people you see the numbers right there on the menu, not the cost but the calories, right there on the menu next to EVERY item! Don’t bother looking on their online menu, the figures aren’t there, which IMO is definitely where they SHOULD be, along with other nutritional information. 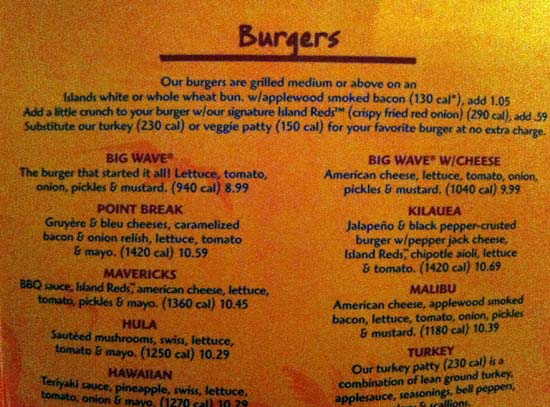 I just wanted a burger with fries and being frugal with my calories opted for the Big Wave at 940 calories. However I felt like I saved some calories by switching out the burger for a veggie patty (yep Bob too, we’re both vegetarian!) and I opted for no bun due to my ongoing wheat bloating, Bob did have the bun 😉 Our buns at home are 210 calories, so I estimate saving around 350 calories on this meal, by opting for veggie patty and no bun making my total around 600 for the meal so far (plus beer!).

We ordered and continued to be fascinated by the menu and calories, with each burger averaging between 1000 – 1400 calories this was definitely not a meal on anyone’s weight loss plan! Now consider that these are the regular burgers, no added ‘stuff’. My friends husband get bacon on his added 130 cals to his burger. Want some crispy fried onions? Add 290 calories!!! Considering that the calories in raw onions is few this is amazing, but hey it only costs you 59 cents! So adding bacon and onions would cost you $1.64 extra but calories wise increases your meal by 420 calories!!! INSANE! We were interrupted by our menu analysis by this: 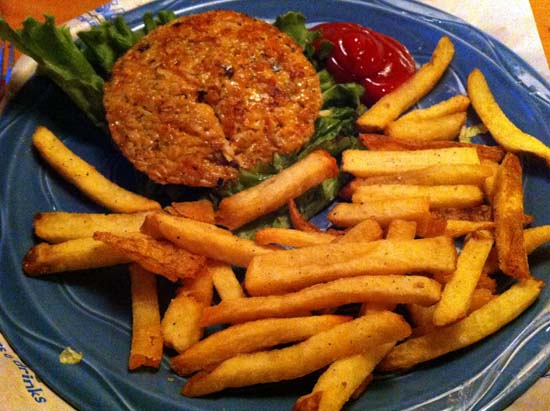 The meal came… and it was… ok. The burger was actually quite nice. We had a side of ranch dressing, and I added ketchup too (Heinz trash ketchup not my usual one from Trader Joes with no corn syrup, this one tasted weird by comparison!). The fries though were odd. Too crispy, too hard. Not that these issues stopped me from ordering more 😉 Hey it WAS date night! And I already saved 350 calories remember… which was a good job because:

Yep the fries alone are 470 calories! But hey we got 470 calories extra for FREE because they are endless! Just like at Red Robin, where they are bottomless (and also around the same calorie value – damnit!). Again though offering free endless fries to consumers at 450+ calories a time is pretty bad right? What’s that? Did we want desert? Hell No! I’ve already eaten over HALF my calorie requirement for the day in ONE MEAL!

So would I go again? Probably not. I loved the look of the place, all Hawaiian surfer, tikki shack style (just like we want our garden to look btw) but the sheer volume of calories consumed in ONE MEAL shocked us both. This was the deciding factor in us joining the menu planning, at home cooking, survive on 35 bunch. Plus honestly the fries were nowhere near as good as Red Robin IMO. Hmm maybe a review of Red Robin is in order too? At least they place their calorie amounts online so I can prepare ahead of time 😉

So have you been to Islands? Were you shocked at the calorie amounts? What’s your favorite burger joint?