Saturday night  we left our warm home and went out into the chilly evening and headed to Downtown Los Angeles for the 2013 New Years Race. It was our first night time race and the first run since the jingle jog back in December (due to illness). To say we were unprepared for the race would be an understatement. I’d done some cardio last week (spinning and bodycombat) but nothing like a 5k run. I wasn’t sure my chest was fully recovered and Bob was having issues with his foot, but we decided to go. As such I decided that I was going to leave my Garmin at home and just RUN! No pressure. I did this for the jingle jog and it helped run for FUN!

One thing I will say, if you are parking in LA and want to find your car ever again in one of the parking lots – take a photo of where you parked it! We do this in most big parking lots (Disneyland etc) as the last thing you need to worry about is finding your car when you’re tired! 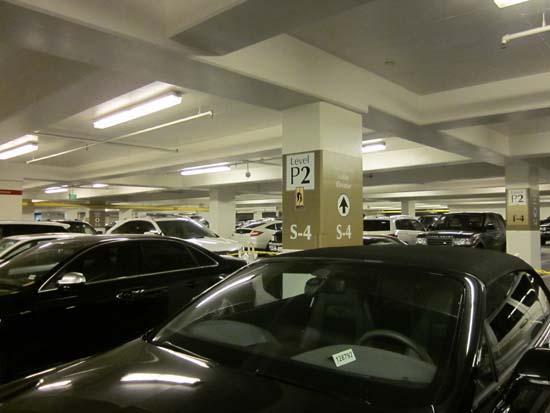 You can barely see the top of my car here but this was the view from the elevators, that way we knew which direction to head!

Once we parked up we headed to the start line, or so we thought! Ended up walking two blocks in the wrong direction… I love L.A! Once we finally found the start line we collected our bibs and discovered there was no goodie bag/t-shirt pick up on the day. Seriously??? Note to organizers – ALWAYS do race day pick up! Some of us work Friday & Saturday and can’t wander downtown LA to collect our goodies! I was a little annoyed that we’d take the scenic route to the start line, now this? It was gonna be one of THOSE nights. 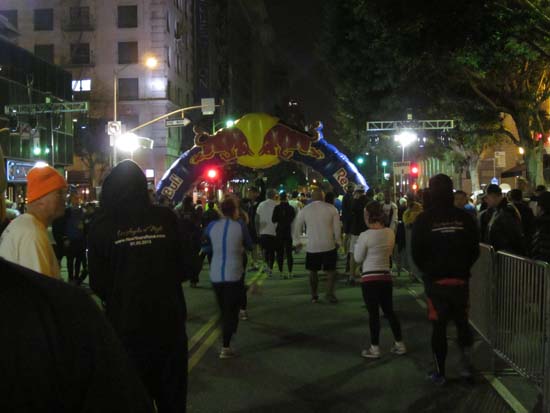 But we put on our  bibs and headed to our corals. I was in coral 3 and Bob was in coral 4. I hung back in my coral and he was in the front of his. That way we got to take pics! 😉 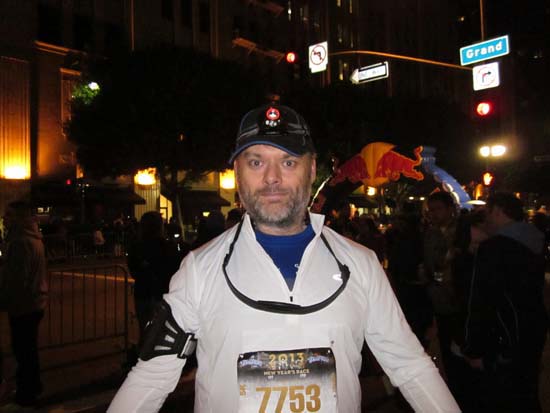 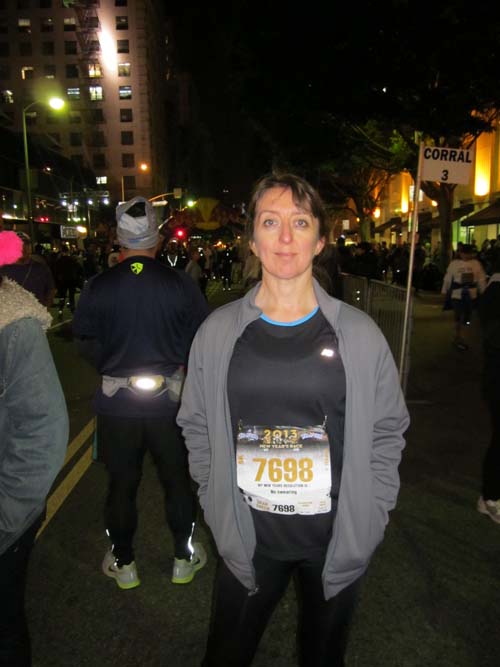 It was kinda warm for a January night, warmer than Simi anyway. As we were waiting I realized that wearing three layers of clothing was probably a little much. Should have left the jacket in the car.. ah well! The race was 20 minutes late starting (told you it was gonna be one of those nights!) and so we chatted to pass the time, and took more pics! 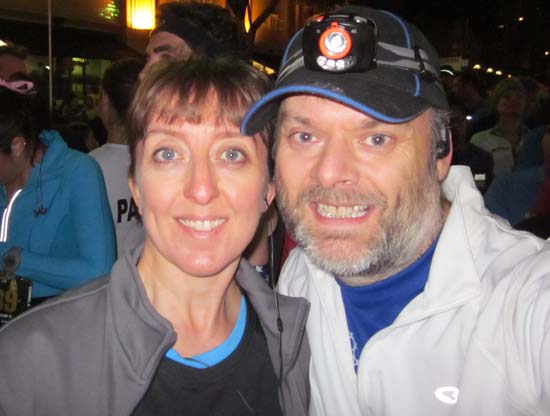 Love this photo of us!

When we finally did set off it seemed like things were going to be ok. As this was my first run in a month I had already decided to take it easy, my legs were already hurting from bodypump Wednesday and I’d taught two classes Saturday morning too, but I wasn’t ready for my hips to join in! The run was NOT fun, I didn’t expect it to be after a long hiatus from running but wow! The worst thing was I ended up running 4.2 miles! A 5K is typically 3.1 miles so I can imagine you are wondering “what happened”? Well what happened is the course was not well marked! All was fine till the last mile and quarter when everyone in my ‘group’ ran the wrong way around the cones and ended up taking a right after the u-turn rather than continuing on. Frankly the whole last half was a joke. The roads were supposed to be closed yet about 50 cyclists came through the course at one point 🙁 Many pedestrians crossing the street, not enough marshals and the marshals they had weren’t doing their jobs 🙁 At the point where I (and about 200 others) took a wrong turn NOT ONE marshal in that area said anything.

There was probably more things but that’s all I can remember right now. As soon as we discovered we were going the wrong way one girl I was running next too we pretty much stayed together for the mile to the finish line. She had her Garmin on and said we’d run 4.2 miles. It felt like longer but basically we’d run almost 1/2 mile off course before having to run back and get back on track.

As such I got my worst time ever for a 5k race, but as it was a 4.2 miler I’m not surprised 😉 For this race my chip time = 37:43 and I was 680th out of 1381. Now considering I started before Bob and he never  passed me, but he did discover the mistake of going off course sooner than I did and ran just a quarter mile off course his time was 33:22 so I’m going to guess that my real time for the race would have been around 31 minutes. Which is still a LONG WAY off my usual 5K time of 26 minutes. If I hadn’t taken the detour I figure I’d have been around 250th! When all said and done I was just glad to get it over and done and able to collect this… 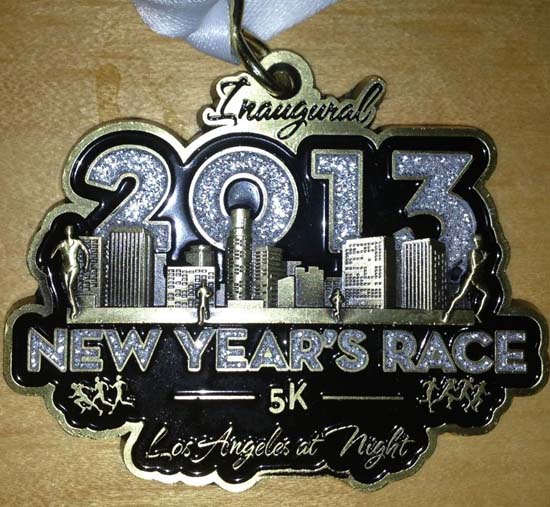 one more for the collection 🙂

The race was pretty much a disaster, and yet I’d do it again. Maybe not that one, and in future I will pay attention to the course maps as I really don’t like u-turns, but I am already looking at races to do in the upcoming year! Ideally our goal is 12 races for the year. One for every month. So chalking up the first one for 2013 as done…