Just in case you don’t know, right now we are on vacation in a very chilly England. I’ve been there since Friday and mentioned previously that we’d signed up for a fun run on Sunday 9th December while we were here. Ordinarily we don’t do fun runs as they aren’t chip timed, but this fun run was in aid of the local hospital, specifically the children’s wards so it was for a good cause but also we decided to do it for the FUN factor. You see everyone registered for this run got a santa suit to run in!!! So much fun! 600+ people running in a santa suit is so funny!

I have to say that my jet lag was so bad Saturday night I got a very unsettled three hours sleep, so I was NOT at my best Sunday morning preparing for the run. I told Bob I was considering not doing it. After an inner battle I decided that I would go and if I had to walk, then whatever. Not like it was timed, it didn’t matter! Pressure OFF! I bundled up in three layers of running tops and we headed out into the freezing cold morning. We ran with our nephew Rhys, and had the support of Andy (brother-in-law), Danielle and Cara (nieces). 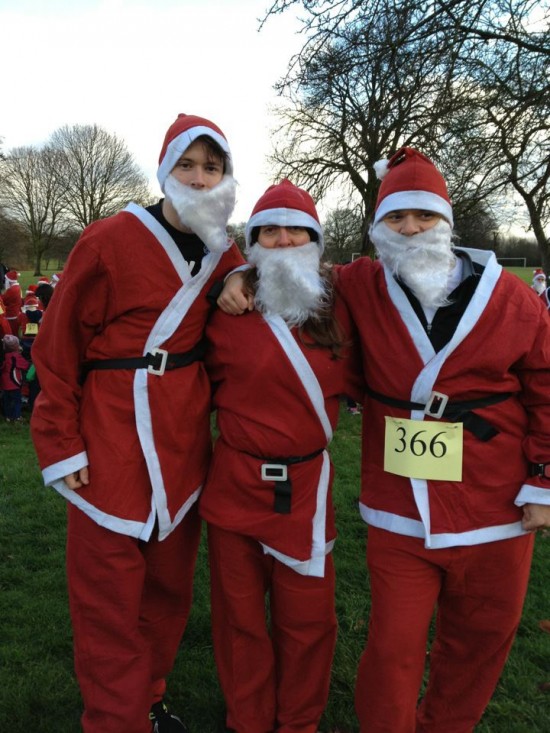 Rhys, me and Bob!

At the start line it began to rain but by that time I was nice and toasty, the extra layer of the Santa suit was warming me up nicely 🙂 The Santa suits were a little on the large side, but I tucked my Santa pants into my running pants and made it helped them stay up 😉 The jacket was huge on me, and on lap two on the park I almost lost my jacket due to the wind drag so I shrugged it off my shoulders and finished the run with it tied around my waist 😉 It wasn’t pretty but I ran the whole thing, and actually felt WAY better afterwards. At the end we got a finishers medal and water/biscuits. 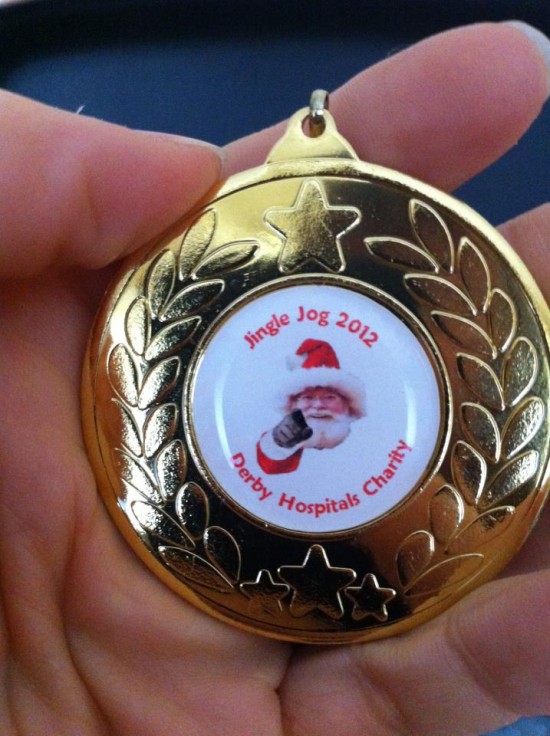 We didn’t know we got a medal so that was a nice surprise 🙂 It’s all about the medals for us, we love finishers medals! I think all runs should have them 🙂 Our Santa suits are a little muddy and wet but I think they will be ok washed out and we’ll be able to get another run or two out of them 🙂 I think I inhaled some of the beard though 😉

All in all a fun race, glad I did it! If you are in the Derby area in December next year I recommend it!