It’s race recap time for the Hollywood Half Marathon/10k/5k. I signed up for this as a cyber Monday deal back in 2013 and so though it’s been on the schedule planner for a while it definitely crept up on us! April is a tough month with THREE events this month! One thing I liked about this event was the virtual goodie bag. I know some people like the race bags but be honest most of it is full of crap. All fliers for other upcoming races, sponsors and samples of stuff you rarely try. The ONLY good things I’ve gotten from a race bag was the Love Run bag in Westlake. They have the best goodie bags. For the actual Bags I like the The Great Race of Agoura printed bags.

One thing I didn’t notice however when I signed up was that there was no packet pick up raceday (unless you paid for it!) so that meant going downtown on Friday to the expo for our t-shirts and bibs. There was an expo with booths but honestly nothing either of us was interested in. We’ve just been to lots of races this year so nothing we hadn’t seen already. The expo location was fun though at the Palladium, a 1940’s ballroom turned theatre. We actually commented that it would make a great roller rink. And it SO reminded me of Ritzy’s in Derby! 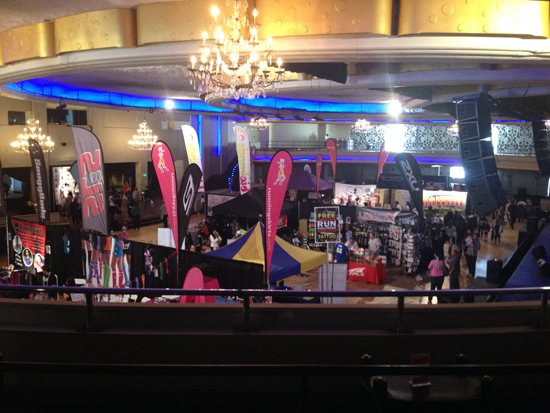 So that was packet pick up, quick and easy 🙂 The T-shirts are good, though a little thin for white shirts. Post packet-pickup is when things went downhill for me. I started feeling nauseous. After my last PT session for the week I came home and slept for an hour, got up to walk the dogs, prepped for the morning and went back to bed. We agreed to get up at 4am and see how I felt. 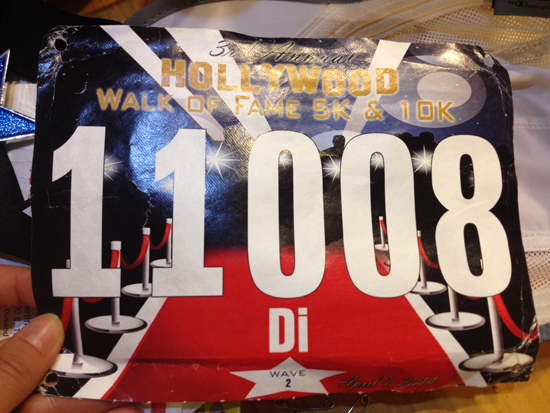 4am Saturday morning the alarm went off and I’ll admit the temptation to roll over was BIG! Instead we got up. I felt better than Friday and decided we’d go to race. We got ready and headed out to North Hollywood where we got the Metro. After a 25 minute wait in line with other runners. Man that was a HUGE line! We had already agreed NOT to do 6am races again, now we were saying NOT to do Los Angeles races. Just how many people were going to this race? At least the metro station was fun to look at. Bob noticed the ceiling was decorated with film reels! 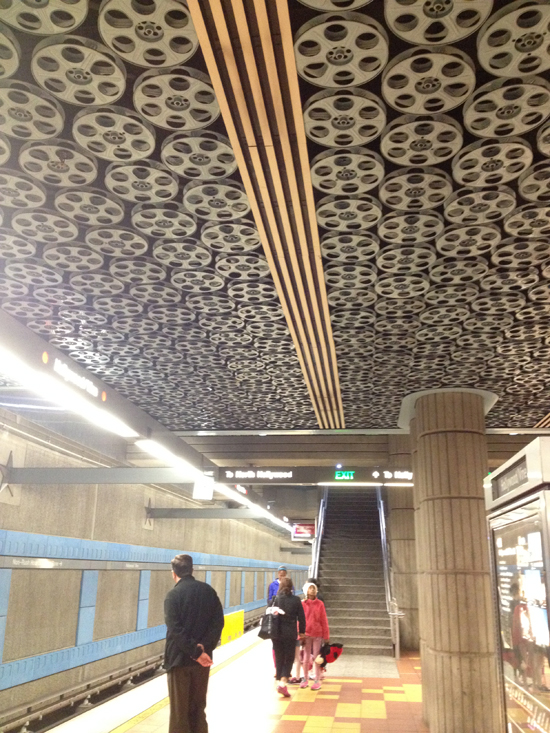 We eventually caught the 5:55am train! The race was supposed to start at 6am! The start cut off was 6:15 so we knew we’d be ok, if late. At 6:05 we were coming out of the metro station to the starting horn. I was assigned wave 2. The plan was to go potty before the race but that wasn’t happening as I couldn’t even SEE any potties so we got in corral 2 and started the race, which should have looked like the map below: start, straight through to the 5k turnaround, then a left down Gower, back onto Hollywood Blvd and down Vine St to finish. 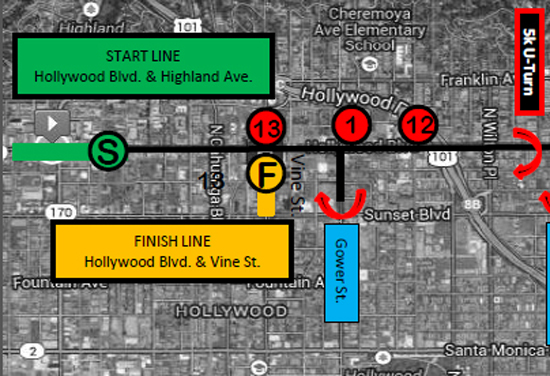 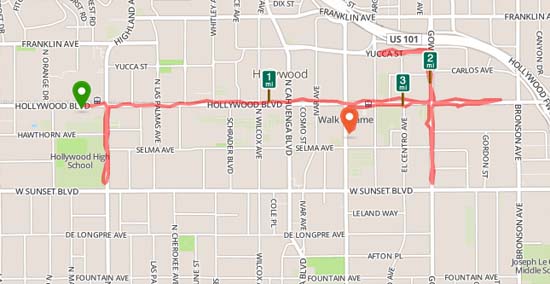 As I mentioned I started in Wave 2, my assigned wave, and there were LOTS of walkers. You were assigned corrals based on previous times so no way those people should have been in those start corrals. I applaud anyone that enters these races but please respect that some of us are not just running but RACING. Now my race was fraught with issues one of which was the sheer amount of people! The organizers have already said that next year the 10K/5K will have a different start time which is a good move. Honestly we could have started at 7am and been much better off. There were 11,000 people lined on the street to race Saturday morning!

So how was the run itself? Awful. I hated the course. As much as people think “Oh it’s Hollywood! Must be awesome” the courses around there are boring. Just stores, houses and apartments. You really don’t SEE a whole lot. Especially at 6am 😉 As I mentioned I didn’t get to go potty prior to the race so the whole time I was trying to push for pace I had to back off as I needed to pee! I thought I set my garmin and instead pressed the lap button, so I didn’t have Garmin data for the first mile. Like I said the walkers were bad (not in the Walking Dead sense!) and there were just so many people!!! Lots of elbowing, shoving and jostling. Especially on the 180 turns on those side streets. Plus the course was NOT flat as indicated, but then they had a last minute course redesign now including rolling hills. At the first water station I saw a few people almost slip and fall on the spilled water. Honestly I didn’t enjoy it. After the first mile all I kept saying was “FINISH”. Even my running playlist couldn’t push me through it. But I did finish. I was drenched too. I knew I was fighting a bug yesterday and now it was coming back for vengeance! 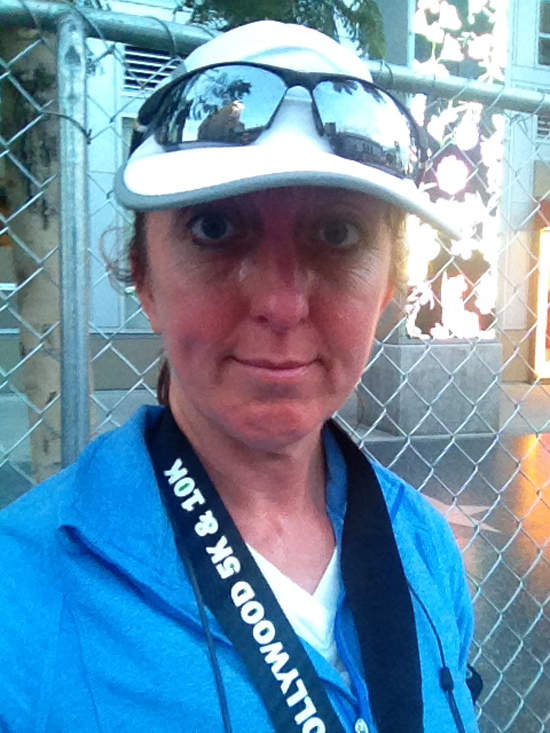 I finally got to go potty at the finish 😉 Stopped for a photo op (hopefully photo soon) and then caught up with Bob to stretch. My time was over 27 minutes which is poor for me. Just goes to show that I NEED to potty pre-race 😉 We didn’t think either of us had a hope in hell of placing so we just headed home. Honestly we were just so tired from the 4am start. As it turns out both of us did well! Bob got 16th in his age group out of 84 and finished in just over 30 minutes! There were around 2200 runners in total! 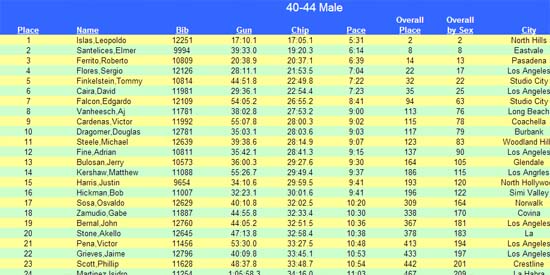 I found out that I placed second in my age group, out of 189! Had I been 100% I think I could have got 1st ah well. On my crappy day I got second so I’m definitely taking that. Just goes to show that it more depends on the OTHER runners in your division as well as how well YOU run. I’m very happy with 99th out of 2200, top 4%!

Both of us crashed Saturday, and I was sick Saturday and Sunday 🙁  I’m happy with my time and placement considering all the adversity of the race. The organizers sent an email out with changes they plan on implementing next year:

In all we already made the decision NOT to schedule any more races in Los Angeles. We already have a couple lined up for this year but definitely no more, and definitely none at 6am!!! Early birds we are NOT! Heck we don’t get up till 6am usually!!! So that was our first, and last Hollywood Half Marathon 5k!

Did you run the Hollywood race, what were your thoughts?