Sometimes you just wake up on race day and don’t want to run. That was how Sunday was for me. In hindsight I’d had a busy week or two trying to get back on track after being sick (and missing the April duathlon) and I hadn’t run since the Hollywood 5k at the beginning of the month. We woke up at 6am Sunday morning and I just didn’t feel like running. I felt fine, but just blah. I really wanted to turn over and sleep in…. but I got out of bed and got ready for the run, which was supposed to start at 7am. It was a local race so no need to get their super early.

Well the website said the event started at 7am, as did active.com but sitting in the portapotty doing my pre-race “business” I heard the announcer say “30 minutes till start time!”. WTF? Yeah apparently the race itself had a different start time. The website was horrible to navigate and on another page it had the race as 7:30 start! Um the event IS the race, not the ‘pre-race” BS! Great, now we had to stand around for 30 minutes…. man I could have slept in for 30 more minutes!!!! As we were waiting I said to Bob “I think I’m done with racing for a bit”… which is pretty useless as a statement as we have a bike ride next weekend, the Color Run in June and a 5K in August! Heck I’ve already signed us up for a 5K in January!

Naturally I’m already annoyed at this point. First I don’t feel like running, then we have to stand around for 30 minutes, and when it did start the start line was packed! 700 people packed into the start area. The photo below is from the Gator Run facebook page. If you squint you can see Bob about 1/3 the way back. I was in the bathroom (again).

The race was terrible. Usual course we’ve done before but nothing was clicking for me. I was annoyed with all the people right at the start who were walking. Yes you paid your money to take part but please don’t start right at the front unless you’re RUNNING. I saw pushing, shoving, yelling… runners are NOT happy when you line up at the front and have no intention of running. Call this a public service announcement but Common courtesy says if you’re walking to go to the back, with the strollers and dogs. Speaking of dogs, there were runners with dogs at this run and all I could think lining up was “man I wish we’d brought the dogs”! Ah well, next year!

As I said nothing clicked. The walkers, tons of runners trying to pass them, my belt pack was slipping around my waist, my arm band falling down my arm. In all just one of those races that you just want to get OVER. At least I started my Garmin right this time 😉 It wasn’t until mile 2 that I started to feel comfortable. Then 1 more mile and I’m done! I cheered on some runners who were stopping to walk parts of that last mile, if I wasn’t going to PR I was going to be damn cheerleader! One gal that I chased throughout mile 1 and 2 was now walking so I ran with her and offered words of encouragement. All in all I was very happy to cross the finish line. I earned this medal. 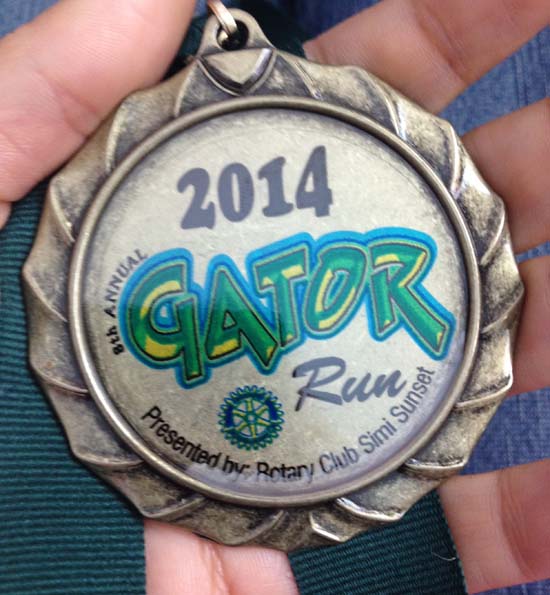 My finish time was 26:48 and I took 4th in my age group, 126th overall. Bob wasn’t far behind me either! I saw him at the turnaround before heading along Los Angeles Avenue so I knew he’d be close. He PR’d this race (his training is paying off!) at 27:25, 11th in his age group and  140th overall!

In all the organization of this years race didn’t seem as good as previous years. I liked the addition of the finishers medal, definite thumbs up for that. In all it was my attitude on race day that was the thumbs down for me. I think we’ve just done too many races so far this year that it felt like a chore to get up, get out and race. Definitely taking a break from RACING aside from the events we’ve already signed up for.

Have you had a bad run?