Today is a recap of the 5k race we did Saturday in Camarillo. It was a 5k and after the local fires the previous weekends my cough had decided to make a bit of a comeback like some kind of movie villain that just won’t die! Seriously how long can this thing last… Anyway a recap of the Creekside Chase…. 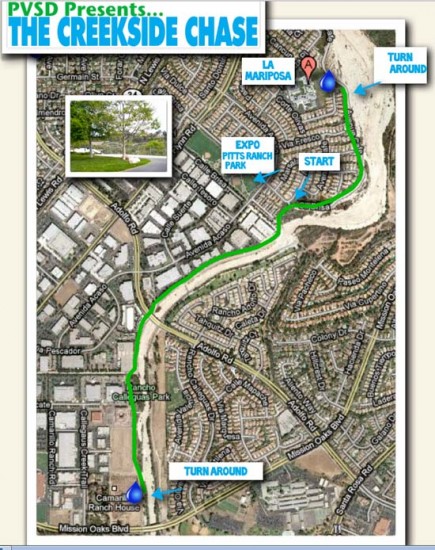 We received an email a few days prior to the event that the race was going to be busier than the organizers planned and now there would be waves so that the course wouldn’t be too busy. We were scheduled for wave 2 which meant an 8:30am start. We arrived at 8am and parking though busy wasn’t too bad, I’ve seen worse (great race of agoura springs to mind!) it was then that I discovered I’d left my headphones at home 🙁 Bob said I could use his so with some fiddling around with that (wireless headphones) we headed to check in. It was then that we noticed, no chip timing 🙁 I was bummed. I really don’t like paying for races with no chip timing and this didn’t say “fun run” and it had awards in age groups so I assumed chip timing… nope! So with a sigh we continued to t-shirt pick up only to find no adult t-shirts left 🙁 Argh! I was ok as the youth large fit me great (probably the best fitting race t-shirt I have, might get youth large in future!!!), Bob however was S.O.L and picked up another youth large so I guess I have two t-shirts now 😉 Then we saw my friends Teresa and Doug, who didn’t know each other before the run, but got along great 🙂 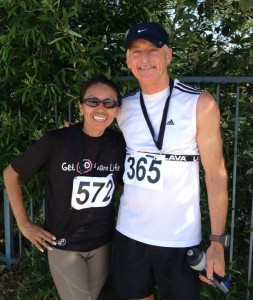 The race was pretty basic. The startline was basically chalk writing on the floor! It wasn’t what I thought I was signing up for but I was determined to make the best of it as I wanted to run quicker than the gator run two weeks prior… and thanks to Doug I did! Now I coughed along the way, and I’m not saying it was easy but Doug ran with me and we pushed  through together to finish in 24:24, Doug pulled ahead before the end by a few seconds but I owe that time to him for sure. I think if I was on my own I would have slowed down.  So thanks buddy!!! Call it payback for all those TRX beatings 😉 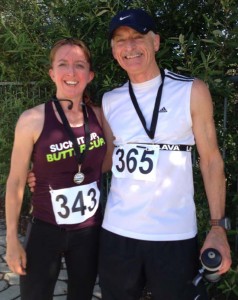 Teresa finished 15 seconds in front of us so we came in around similar times, and while we waited for Bob we took a few pics after getting our finishers medals!;) 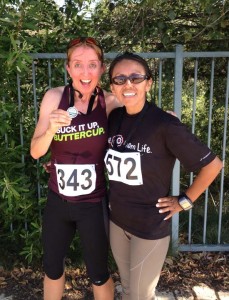 Bob did great also coming in quicker than the Gator Run which was our goal for the race. He finished in 28:05 which is a full 90 seconds off the Gator Run! Overall we all did great, but I’m seriously over the moon that I came in under 25 minutes! That was my goal for 2013, I just didn’t realize I’d hit it so soon. I think I needed the push and Doug gave me that! Doug also took some great post race pics so thanks buddy!!!! 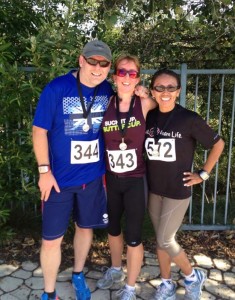 Bob and I did great considering neither of us has really run since the Gator run. Bob got out to run a 5K one Thursday and I managed a measly mile one week! I think pushing for this race has made me realize that FULLY HEALTHY I could beat this time. Out the start I was running FAST but my lungs couldn’t keep that pace (without coughing up a lung anyway which it felt like I was going to do at points during the race)…. race stats from Garmin…. 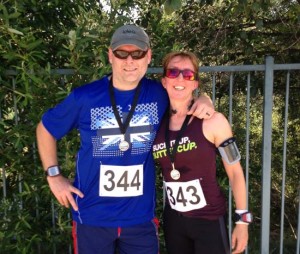 As I knew I’d raced well I really wanted to stay and wait for the awards ceremony, just in case! Teresa had to leave and I told her that I’d collect her medal if she won anything… and she did!!! She got 2nd place in her age group!!! The awards were over an hour LATE due to some people running in the wrong wave and it not being chip timed so everything was done manually… but along with Teresa both Doug and I placed in our age groups!!!! I now need to figure out WHY I ran faster, was it the music being low or my buddy Doug pushing me through it? 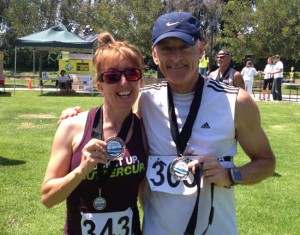 Doug got 2nd in his age group (as he calls it “the old geezer” category, lol!) and I got third! My first medal in the 40+ age group!!! Also can I just say how much I love my arms and shoulders in the above pic 😉 BodyPump rocks!!! Naturally this meant more photo ops and the gratuitous TEAM GB medal biting photo! 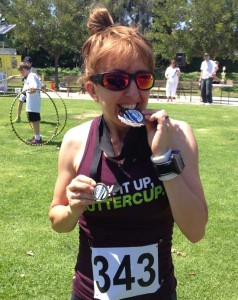 In all since the Gator Run 3 weeks prior I cut 2 minutes off my time! To say I’m happy is an understatement. But the biggest thing from this race was learning I CAN run faster, the issue right now is endurance at that pace. Which is where future training comes in… because I want more pics like this… 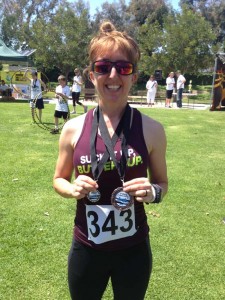 Because I have that competitive nature I just want to get faster. I want to run that WHOLE MILE at 5:28 HAHAHAHAHAHA Ok stop laughing… right now I’d take 6:28 or 7:00 because I’m realistic and I know that I cannot go from 7:31 to 5:28 … I am a trainer afterall 😉 I know what is realistic goal wise….  BUT I know that I won’t be happy till I get a first place. I’ve been 2nd and 3rd in my age group before time for that GOLD! So training mode is switched ON! First place was 22:18 and second place was 22:58 at this race, 2013 gator run winner was 21:44. In contrast The Great Race 2010 the winner was 25:43 so you just never know… as Doug and I were saying: it depends on the age category you are in, some are more competitive than others… and it depends on who shows up at the race.

Have you beaten yourself recently? Get signed up for a challenge, race or run with a buddy!

EDIT: The organizers of the Creekside race emailed post race that they would be getting more T-shirts printed so everyone will get one (yay Bob!) and that next year they are hoping to get chip timing!!! Yay! At least they learned from this event 🙂