In October 2013 we did our first duathlon and it was so much fun, hard but fun! We knew we wanted to do it again and Elite Sports Ventura County has a series of duathlons throughout the year that we knew we wanted to do as many as possible in 2014. That meant signing up for February, March and Aprils events, as well as becoming a USAT member! As always the goal with ANY race is to push to finish and beat your own previous time. As this course is the same as last years it’s a great way to see how our fitness is improving. 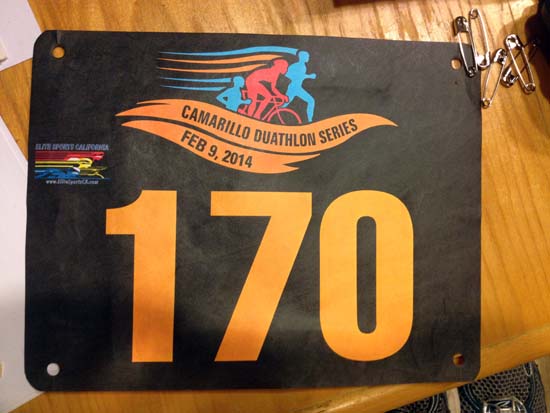 Saturday we picked up our race packets (which has a great shirt btw!) at Sports authority in Camarillo. I have to say that having the race packet pick ups in sports stores is genius, we both bought a new pair of running shoes whilst there. More races need to do this! Whilst there I browsed the sales racks and found a cycling jersey for $20 which was a steal so I snapped that up. I guess this means I’m a cyclist now! 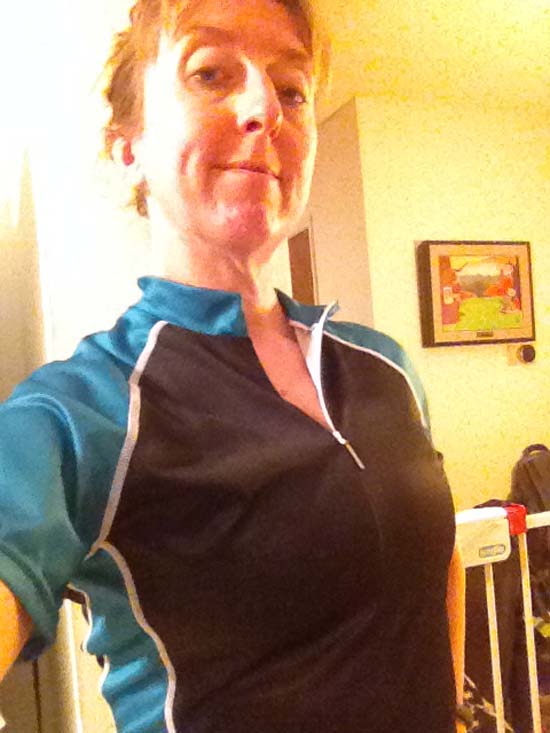 This year we set all our stuff out the night before, trying to get organized. Remembering everything you need is half the battle for these races. Towel for the transition area, garmin + strap, cycling shoes, running shoes, running belt, three race #s (jersey, bike and helmet), water, gels, hat, jacket, iPhone armband, helmet… lots of stuff. Remember No helmet = No ride! We set off around 6:55am 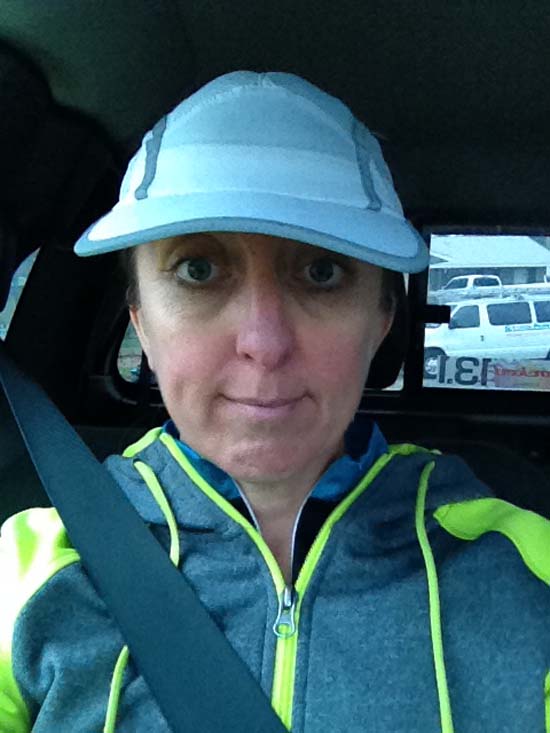 Weather was a little cooler than I’d like. Heading to Camarillo on the 23  it looked pretty cloudy in the mountains. The ride didn’t take long though, 30 minutes and we were at the race site parking up and unloading the bikes. 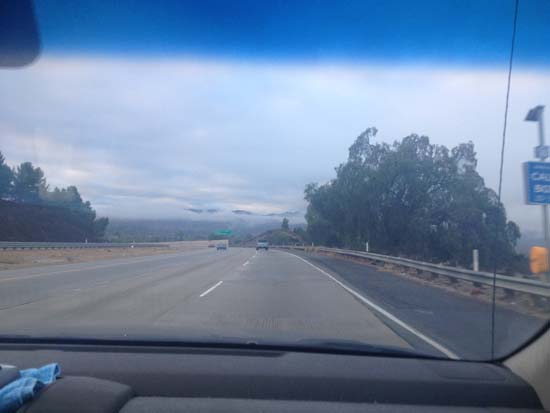 We’d brought a towel for the transition area to lay our stuff on (guess who was researching duathlon tips?), and I’m glad we did as the floor was damp and muddy. Bike racked, shoes and helmet laid out and then bathroom break! The Olympic distance race began at 8am then we lined up for the Sprint starting which started at 8:20am. It wasn’t long before we were running! The race route below was boring but I kinda like it now, because it’s pretty flat and after last year I know the route. I know that as soon as I hit that turnaround I’m 1/2 way and it’s a little downhill. I don’t like going past the animal shelter and hearing all the dogs barking though 🙁 Poor babies! We got Sky and River from their in 2002! This loop is 1.5 miles. 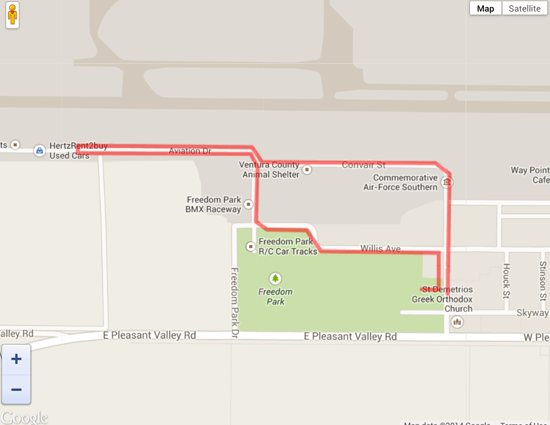 After the first run it was into the transition area and onto the bikes. I got my shoes on no problem but my helmet wouldn’t fasten. Luckily Bob was in the transition and fastened me up in no time. I get frustrated and fumbly when things start going wrong 😉 Anyway after some help from my babe I was off and out on the 12 mile ride. Which is pretty much just around the fields of Camarillo farms. I got overtaken a lot during the ride, but I’m still getting used to the bike, and only had two quick rides on it before race day! 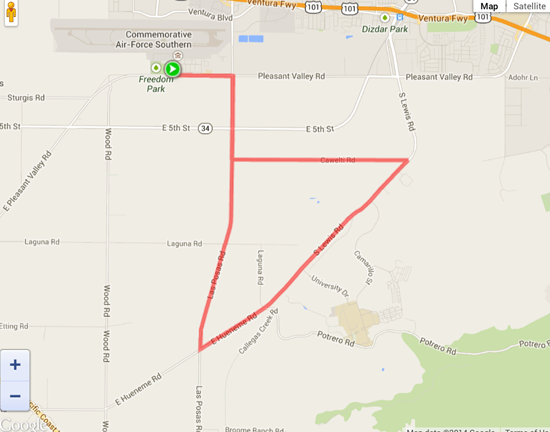 In hindsight I got into my own head too much during the ride: was I in the right gear? Am I going fast enough? Are my RPMs right? Did I go the right way? Wow it’s quiet out here? Am I pushing hard enough? Am I saving enough for the run after this? …. Yeah totally over thought the whole thing! 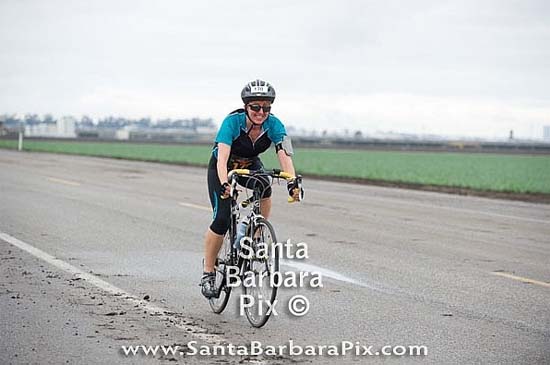 This was not helped by the fact that  when I wanted to check my cadence on my garmin I noticed I’d lost a pin out the strap and it was in fact barely hanging on my wrist, so checking speed/heart rate/cadence was out the question without almost loosing my garmin. I did manage to eat a shot block and take in some water whilst riding. As I’d NOT practiced this I was pretty happy I did it without crashing 🙂 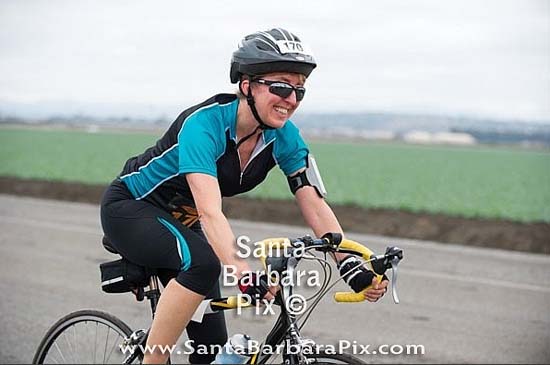 After the ride it was back to the transition area and back out on the run. OMG concrete legs!!! I’d forgotten just how hard that bike –> run transition was!!! During the first 1/2 mile I’m taking off my garmin to put in my pocket then just decided to hold it, noticing I was actually running pretty fast and felt good. It takes a while for the legs to wake back up but once they did I was fired up. I was chasing down people that overtook me on the ride which was good and was soon at the turnaround then it was back past the shelter, along the dirtroad and into the finish! 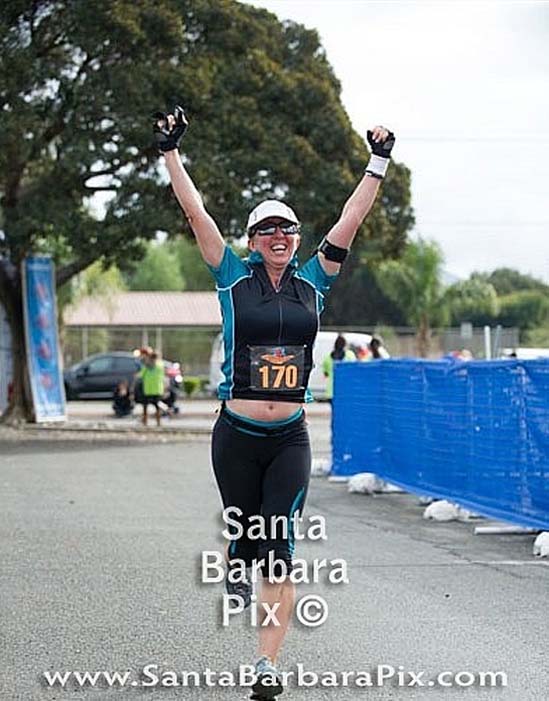 Yeah those jerseys aren’t very long huh? Anyway I finished without really knowing my real time as I kept forgetting to stop/start the garmin in the transitions… I’m hoping that becomes more second nature with all these things to remember. Got my medal and waited for Bob to cross the line after 🙂 He wasn’t far behind me either!!! He did great on the bike! As he did last year. I admit I was a little worried as it was only his third time on the bike and third time in cycling shoes/clips! 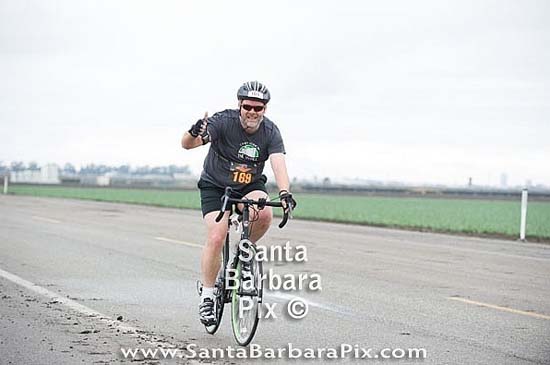 He got his medal then we stretched out and grabbed some post race snacks. It was fun chatting to a few of the ladies there whilst eating bananas, strawberries (locally grown and SO good!) whilst re-hydrating. Then it was photo time! 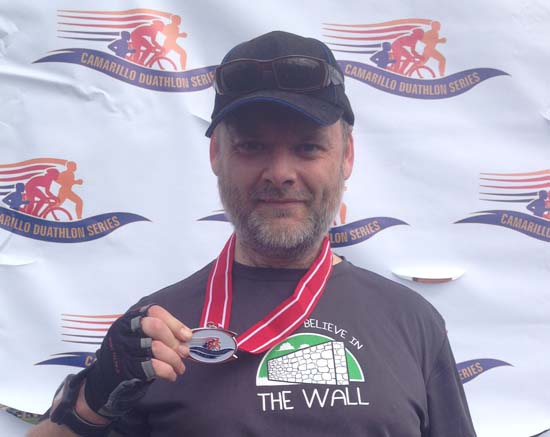 Bobs shirt says “I don’t believe in the wall” 😉 As we were running I shouted that too him on the second run!!! Even when we’d finished and was loading the truck up people were coming and and we were cheering them on. The atmosphere among the participants is different to regular running races. Everyone pushes you. 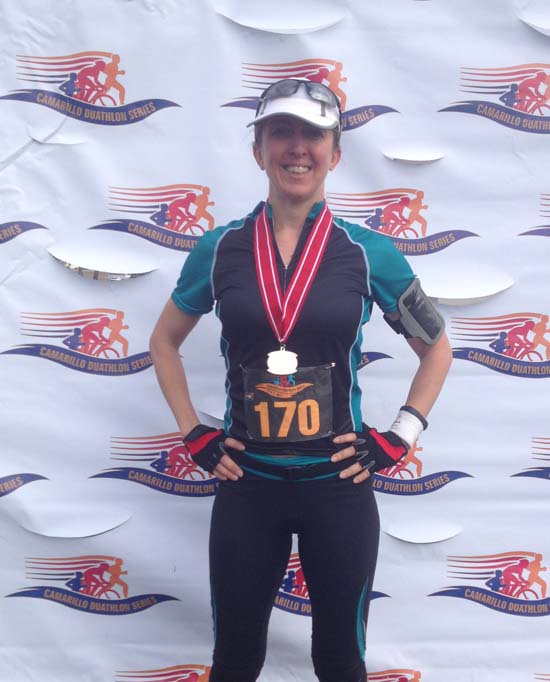 The medal was pretty much the same as last year but in a different color scheme, I think I prefer this color scheme to the lilac of 2013. 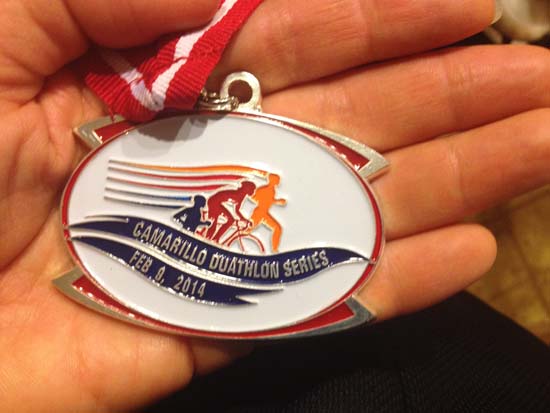 The interim results were posted at the race and I saw that I was 7th, 2 places above last year!!! And I’d beat my 2013 time by 11 minutes!! My immediate thought was ROAD BIKE makes a heck of difference. I wish they’d put ages on the final results though. It’s always fun to see where you placed among your peers. Let’s face it I’m no spring chicken anymore 😉 And hardly competition for the racers in their 20’s! lol! 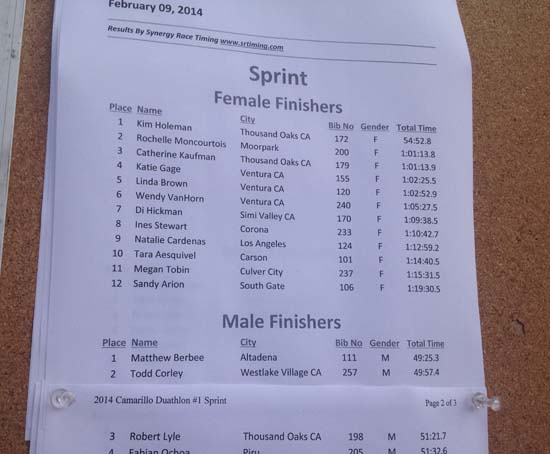 On the way home we talked constantly about the race, things we’d change, training plans etc. Then more chat whilst walking the dogs, over lunch etc. Pretty much it was the topic of the day. Later that day the final detailed results were up! Still 7th female overall (out of 35) with the following breakdown

At the bottom are the 2013 results. As you can see compared to 2013 I was faster in run #1 by 40 seconds. Slower in transition #1, damn that bike helmet! Faster on the bike by over 8 minutes!!! Quicker in transition #2 (finally!) and quicker in run #2 by 1 minute 45 seconds!!!! Here I was thinking it was just the road bike that made the difference but the runs were way faster too! In fact for a three miler at 23:48 that is on a par with my fastest 5k race pace!!!! I’m not sure how I pulled that speed off!!!

Bob did great also finishing in 1:13:08 which meant he also cut 11 minutes of his 2013 time!!!! This time he ran the whole thing too! Remember that this was his first race in clip shoes, he was also running in lock laces for the first race, and just did awesome!!! So proud of him!

So how do we feel post race? Totally fine!!! No aches, no pains, complete recovery 2 days later. So what would I change?

Learning from races is always good. And we have 26 days till the next duathlon so we better get busy 😉

Have you raced a duathlon?