The Arroyo Simi Half Marathon, 10k and 5k was on Sunday and I’d signed us up MONTHS ago (early bird pricing). I really do recommend signing up early for races to get the best deals. We actually run this race last year and I posted my review and results from that race already on my 2013 Arroyo Simi 5k post. The problem this year is that Saturday after race packet pick-up (again at Sports Authority in Westlake, like last year), I started to feel a little unwell 🙁

As you may know I have Polycystic Kidney Disease and Saturday afternoon and evening I was feeling swollen and achy in my left flank. My left kidney, “Lumpy” as we call it, was not happy for some reason. I drank lots of water, cranberry and abstained from alcohol for the evening and decided to see how I felt Sunday. Sunday morning came and I felt ok, not 100% but better. However mother nature decided to throw another spanner in the works with my fibroids acting up. I swear I was gonna run this race if it killed me! I had run ONCE since the color run June 21st and twice since Hollywood 5k in April. I think we can safely say I was totally unprepared for this 5k 😉 But I signed up and needed to do it. 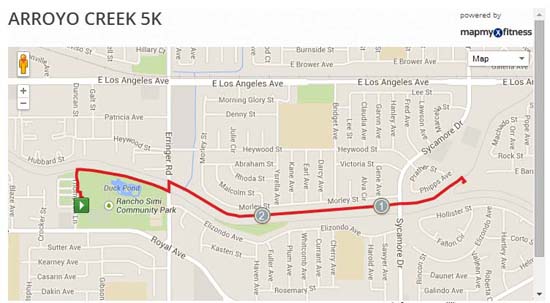 The race started at the Park, then ran along the Arroyo wash. Not much to see honestly, some wildlife which is nice and it’s pretty flat too. Bob and I started the race at the back as were cutting it fine walking from the car (and the usual porta-potty visit!) so we held back and ran from the end of the pack. I should add that I planned on running with headphones/music but one of my earbuds wasn’t working, but I pressed play and off I went.

I started out annoyed at my headphones, annoyed at the other runners, and annoyed at myself. This wasn’t going to be a good race but I had music, albeit through one ear, so I could push through. We crossed the road at Erringer and ran along the arroyo section to Sycamore, crossing the next road and up to the turnaround. Bob passed me just before the turnaround and I ran to keep up with him and we stayed together for a while. I’m not gonna lie, I felt some discomfort in my kidney area and knew that I was going to struggle with the 2nd half of the race. But I had music, I could push through – Then just before the 2 mile mark my headphones cut out completely…. Argh!!! Bob and I were pretty much together and while I was struggling, he was having the best run of his life 🙂 The whole section from Sycamore to Erringer I pushed. I wanted to run the whole thing at least. Now I had no music to motivate it was just me, against my body and my head. On the down straight from Erringer to the park I walked. I had nothing left, and felt like vomitting. Not a good feeling. I took 15-20 seconds to take my heart rate down, gather my head back and settle my stomach. I’d pushed this far, I was going to finish running damnit! So I pulled up my big girl panties and continued on to the finish line where Bob was waiting. My mile times:

I’d share a screenshot but my Garmin won’t connect to my computer 🙁 Been having this issue a while, I think it’s my charger/cable. Anyway this is probably my most CONSISTENT speed EVER. Seriously EVER. I usually start way too fast then bonk during the race. This race I kept it smooth and consistent, despite no music. Usually to be this consistent I have to be following Bob! Bob did awesome and got a PR!!! Go babes! He finished in 5th place in his age group with a time of 27:03

I want to attribute this to all the training he’s been doing for his triathlon, which is in 4 weeks!!! We’ve been swimming a lot together, and he’s been running too. Amazing what happens with consistent training 🙂 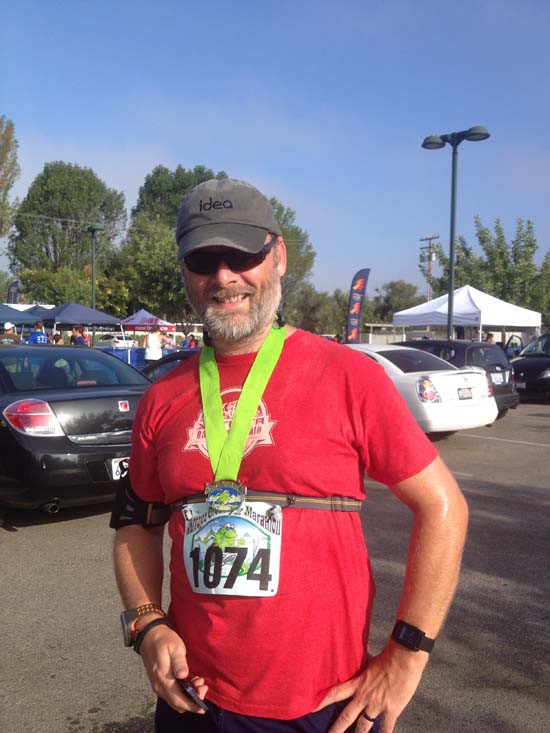 I on the other hand had my worse time for this course, though wasn’t that far off my PR and considering I walked a bit and had an angry kidney I’ll definitely take it! I finished with a time of 27:39 and 6th in my age group, and 14th overall female.

Last year I won this age group with a time of 27:04 so as you can see even with my BEST 5K time of 25:25 I wasn’t going to place this year. Like I always say it’s not just about how well YOU run, it’s who else showed up to run also! I did however earn this finishers medal 🙂 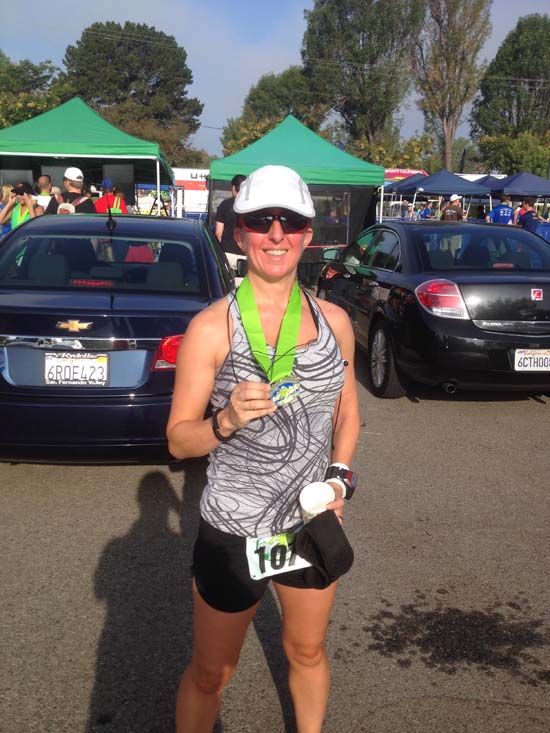 As with all races, you learn from each one.

Honestly right now I feel good. After drowning my body with water and cranberry juice Saturday and Sunday my kidney cooperated and calmed down 🙂 I’d say I’m 99% good now. My plan moving forward from here is to discover what is irritating my kidney as this seems to be too much of a regular thing lately. I’m also going to start running more so that this isn’t so much of a shock to my body.

Also learned that swimming is a great way to avoid DOMS after a race!  Seriously we had our swim lesson Sunday lunchtime, and yes I took it easy. However I have had no hip issues like I normally would post-race! Awesome!

What lessons have you learned recently?