So I’m going to admit that I’m a lazy cook. I don’t really measure anything, I see ingredient lists as suggestions, and I hate anything that takes longer than 30 minutes to prepare AND cook! So I’m making it a mission to become the queen of 30 minute meals, and if that 30 minutes is actually 5 minutes prep with 25 minutes cooking in a rice cooker where I don’t have to ‘baby’ it, then Yay!

This dish was born last Friday. I’d been at Gold’s Gym and just spent an hour kicking butt in spin class and as always came home sweaty and starving. A lethal combination, because you know you need a shower… but you also want to fill your belly. So, I head straight to the kitchen (because Pixel doesn’t mind if I’m sweaty) and decided that I’d get lunch cooking while I showered. After scouring the refrigerator I decided on one pot cooking or ‘one pot concoction’ as I like to call it. Which is basically just throw random items in a pot and see if it turns out good. It did! 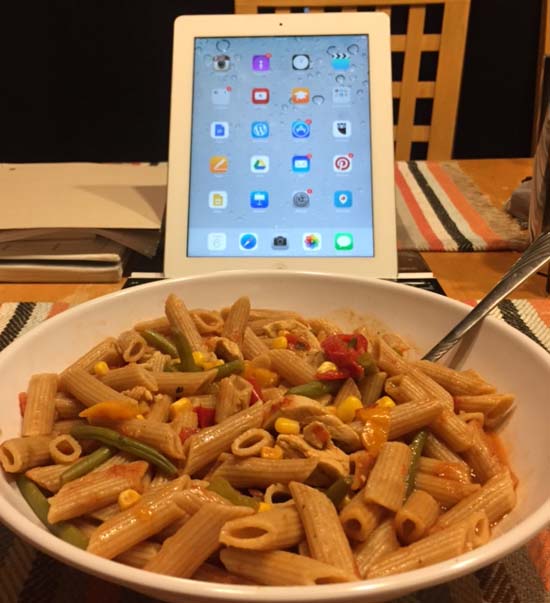 Throw everything in a rice cooker, add enough water to cover and cook. Mine took around 25 minutes to be cooked piping hot, mostly because I threw in two portions of pasta because… I’d been spinning and needed to eat ALL the carbs.

Seriously that’s it! One pot cooking is the bomb! So easy and it tasted great. If you’ve never cooked pasta in a rice cooker before you’ll wonder why you haven’t, because it’s so freakin easy! Plus why cook things separately when you can get all the flavor throughout the dish by combining the food while cooking [keep telling yourself this is the reason for one pot cooking: extra flavor!!! Not because you’re a lazy ass that doesn’t like washing up!]

I’m definitely doing this again! Plus I may branch out and see what other things I can throw together in a one pot concoction. Like could I use one pot cooking for my indian style quinoa recipe? This will be my easy meal on the weekly menu I think as it literally took 5 minutes to throw together and 20 minutes ‘wait’. But as it was in the rice cooker I didn’t have to watch it, and could go do other things, like shower, walk the dog, or prepare blog posts… You know, using the time wisely *cough.listening.to.Disturbed.while.showering.cough*