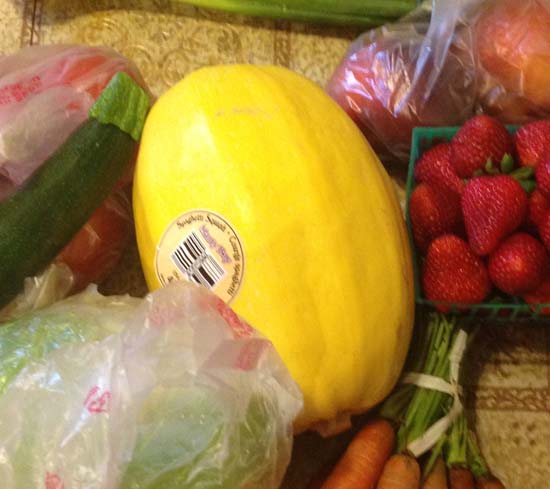 I’m loving all things squash related and spaghetti squash is one of my favorites! I’d never even seen this till a few years ago and now I can’t imagine not having it on my monthly menu. In case you’ve been living under a rock, spaghetti squash is the big yellow melon looking vegetable above. Honestly it does look like a small canary melon right? Well inside this squash is delicious stringy alternative to spaghetti, hence the name!

Cut squash in half lengthways and scoop out the seeds

Optional: brush with oil and season.

Place the halves cut side down on a pan

Allow to cool for 5 minutes, and with fork scrape the strands out from the skin and use as you would spaghetti.

You can also cook the squash in a microwave:

Cut squash in half lengthways and scoop out the seeds

Cook until you can pierce skin with fork

Allow to cool and scrape strands out using fork

What’s the benefit of using spaghetti squash over regular spaghetti? It’s gluten free, low sodium, wheat free, has no cholesterol and it’s an extra vegetable on your plate! You can never have enough veggies. One cup of spaghetti squash is just 31 calories,  making it a great option for those on diets. It’s also a good source of niacin, B6, potassium, vitamin C and fiber. One cup contains almost 10% of your daily fiber.

While the squash looks the part and even has a similar texture, it doesn’t taste quite the same. With the marinara or chili it does act out the spaghetti portion of  the meal but it isn’t pasta. So bear that in mind, it’s a good alternative but not quite the same. I like it though. And eat it regularly to fill me up without adding too much calories, it’s unprocessed and tasty. Give it a try!

Are you meat free on Mondays?