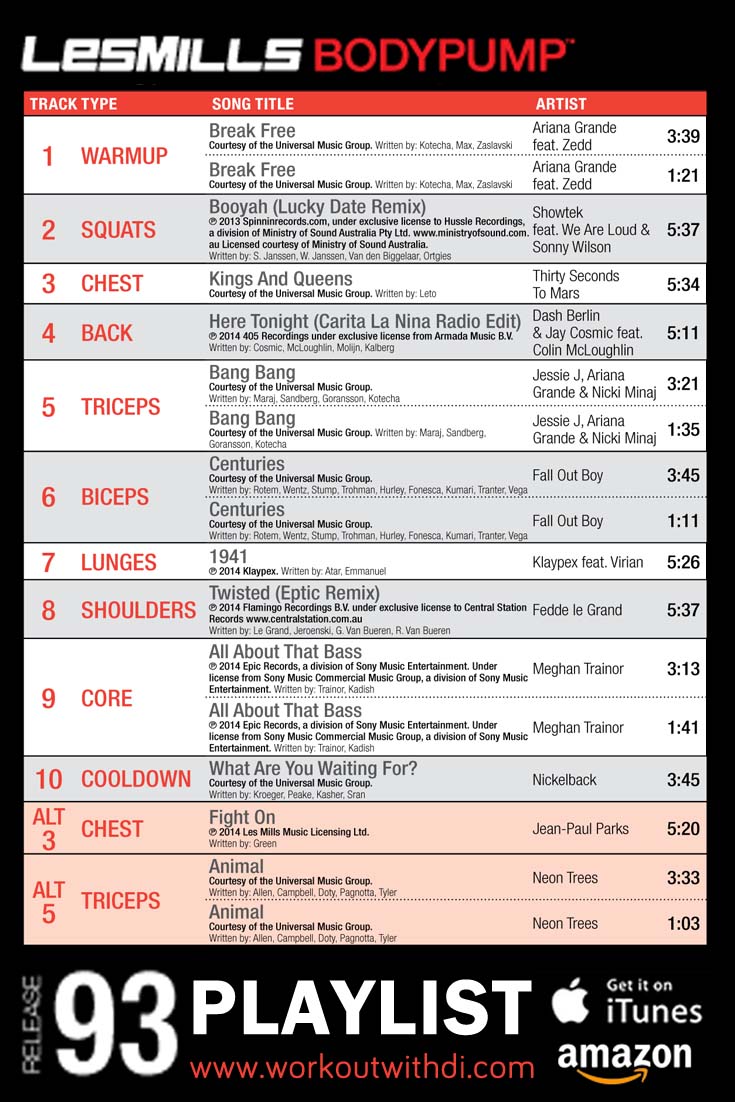 The new Les Mills release of BodyPump 93 launches this morning at Gold’s Gym and each release I put the playlist here for members to view because I get asked time and time again “what was that song for….” and putting it here means they can check back anytime. Plus I know a lot of people come online to look for the playlist so here it is. Bodypump 93! Holy heck I’ve been teaching this a LONG time… almost FOUR YEARS…. time flies. So I’m gonna break it down the new release track by track as always. Links to iTunes and Amazon are affiliate links so I get a little kickback if you click through to purchase, which means I get to spend more time working out, ok maybe blogging lol!

I realize there isn’t much you can really do to make warm ups different with each release so I appreciate when Glen shakes things up. We did side raises and rotator raises/presses in the warm up a few releases ago and they are back in this release. I love the song and it’s a fun one to start off the workout. It’s funny that a few of the songs from this release are on one of my recent spinning playlists! 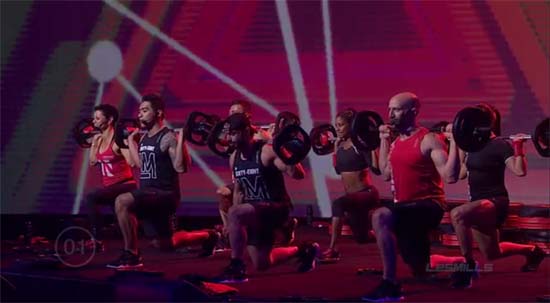 I’ve mentioned before that I’m not a fan of the instrumental tracks but I really like this song. Honestly it reminds me of my vacation to Ibiza when I was younger, techno! It goes well with the choreography too which is always  a plus for me. I like the combination they used and the overall feel reminds me of Antidote from BodyPump 85.

In the interest of honesty I don’t like this song at all for the chest track, this to me is more a cool down stretch track. So slow and no ‘oomph’. We go from a top 10 hit, to techno to a snoozefest. I like the chest fly and the slower tempo, it’s definitely a good chest workout but the song itself does NOTHING for me. Not keen on the bottom halves in a fly either. Coaching needs to be on point for this exercise, and this track as a whole just to drive the in the participants track and keep them awake. My least favorite track of BodyPump 93 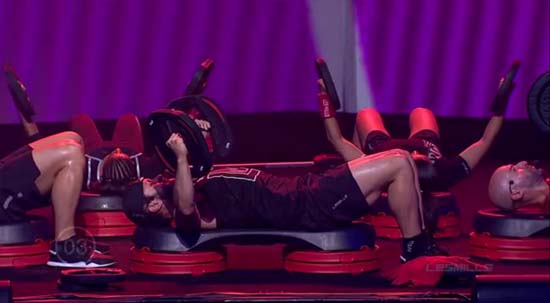 One of the easiest tracks to learn for sure. Another techno track, but at least it has some lyrics for me to sing along to! I love the addition of the power press at the end of the clean and press/dead-row combo. Fires up the intensity for sure. Three blocks of work, back to basics for the back, which I LOVE!

I’ve played this to death in spin so I was happy to see it in BodyPump to give it a different twist. No bar needed, this one is fun and I just love the fun upbeat vibe that the song and choreography gives the participants. You feel it in the triceps but the song pushes you for more. If I have to put any negatives it’s the kneeling overhead extension after the tricep row, I just don’t feel it. It’s active recovery I guess. This song is just missing one thing – tricep dips, those are my favorites!!! 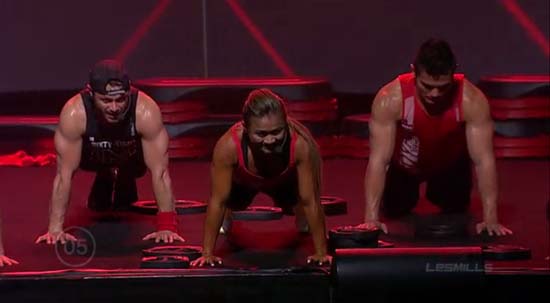 The song has a little riff remix from Suzanne Vega’s Toms Diner. I’d heard this recently on Pandora and liked it enough to download for a future spin playlist but didn’t do anything with it. Well now it’ll be ingrained in my brain as a bicep track. Bar or plates/dumbbells for a long track with minimum recovery. I like it but really not keen on the combo, it just feels weird with the song, almost too upbeat for the ‘feel’ of the song… shocker I know.

Ok for me this is THE song of the release, super fun! I’d never heard this before but I remembered Klaypex doing a bicep track in BodyPump 84 but this one is WAY funner. It works really well for spin too, heads up spin instructors! Anyway I love the song, love the choreography but boy is it challenging! Continuous tension training means NO BREAK. Loved it. 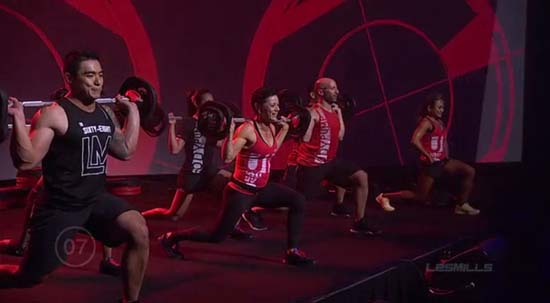 A dubstep type of song which I don’t mind but feel like this release has a lot of instrumental type songs. The choreography is broken down differently this time, short blocks with the bar, loving the tempo switch ups. The standing shoulder work with plates/dumbbells is good. I feel like it’s just missing something though… It does grow on you though, like all BodyPump songs really. 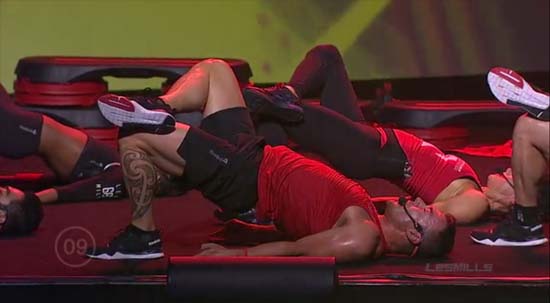 Core – All about that Bass by Meghan Trainor   iTunes  /  Amazon

Naturally I’ve played this in other classes since it’s release so now it feels old in BodyPump 93, or maybe it’s being given a new lease of life? I like the song obviously, as I already bought it, and I like the choreography. You need a few catchy songs that people know to just set the mood and this delivers that. Not that I mind at all but there are some bleeped out curse words, I wish they just left them in personally because everyone knows the words!

Cooldown – What are you waiting for? by Nickleback   iTunes  /  Amazon

Usual melody from Nickleback, again. Honestly I like Nickleback it was only a few releases ago we had Nickleback for the cool down (BodyPump 90!). I am just waiting for SOMETHING in the cool down to bring life back into it. Yes we’re stretching, but lets not fall asleep. This one is a better than than those of late but since Radioactive (BodyPump 89) they’ve all been a bit… blah. About 30% of the people in the BodyPump classes leave during the stretch. We need some better music to KEEP them there. Maybe we need to suggest this as a focus for education and coaching in a future release?

If you click the button above you’ll be taken straight to iTunes where you can listen and purchase each song. **Sometimes the exact remix used by Les Mills isn’t available on Amazon or iTunes so I link up a similar remix. Always check it before you buy 😉

If you’ve tried the new BodyPump release let me know your thoughts in the comments!