As I mentioned last Thursday we went to Lake Casitas for an extended weekend trip. We hadn’t used the RV for a while and decided it was time to get away and use the driveway ornament 😉 The day started as usual with a walk for the spotty monsters. I took them out for a 45 minute walk before it got too warm while Bob started prepping things for the trip. 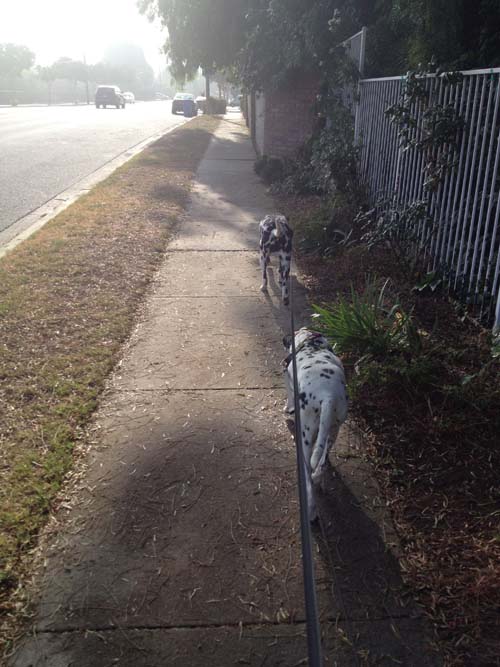 In all it took us 6 hours to get the RV prepped. Just one disaster after another! We should have spent some time the previous weekend checking over the RV, but as we’d taken it for a smog check only a few weeks prior we thought everything was fine. It seemed however that we had a leak in the kitchenette. Bob spent about 4 hours fixing it while I loaded the RV with food, clothes, dog stuff, bikes, tools and all the stuff we’d need for the next 4 days. We finally set off around 3pm! I sat in the rear with the dogs for the trip. 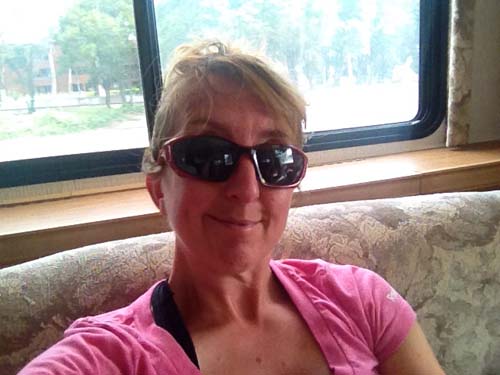 While Sky has been in the RV before this was Pixels first trip. He really wasn’t sure what to make of this new much smaller house (or large kennel) we’d put him in. He sure did enjoy being up close and personal at the the kitchenette table however!!! Usually he’s not allowed in the dining room while we eat, so this was a real treat for him! 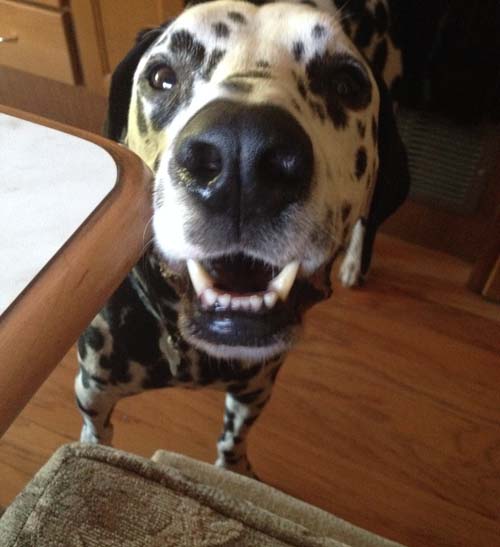 I have to say that although we did no formatted exercise Thursday was one hell of an active day!!! He’s my Jawbone UP24 screenshot for Thursday! As you can see that was 8pm! By the time we did an evening walk with the dogs I was at 200% and over 24,000 steps! Active days like this really help when you can’t get in a workout. All that lifting, fetching and carrying! 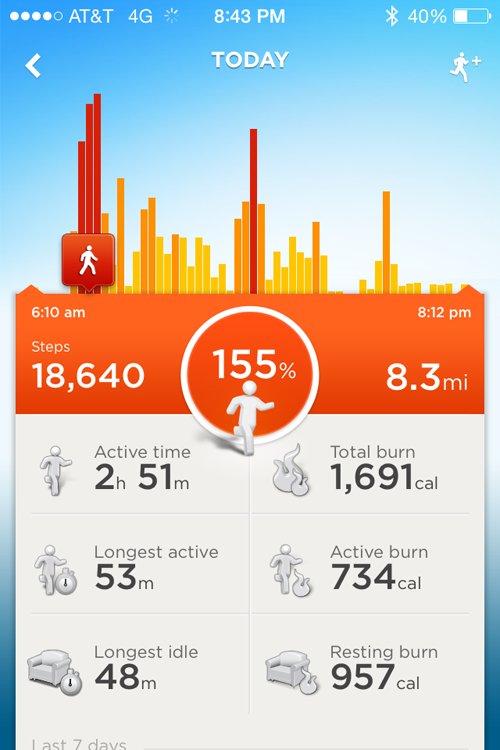 We’d had the water issue under the sink and our troubles didn’t end there. Our campsite had huge rock in the base, which made leveling the jacks a challenge. Upon settling at the campsite we discovered that the slide out, didn’t slide out 🙁 It was too late to do much but find tools and just deal with the cramped cabin for the night. We had dinner and made the best of things. We took the dogs for an evening walk and left the light on outside the RV only to come back to 1000’s of flies buzzing around the RV door. Naturally as we went in, so did they 🙁 So then we spent ages trying to get rid of the flies…. 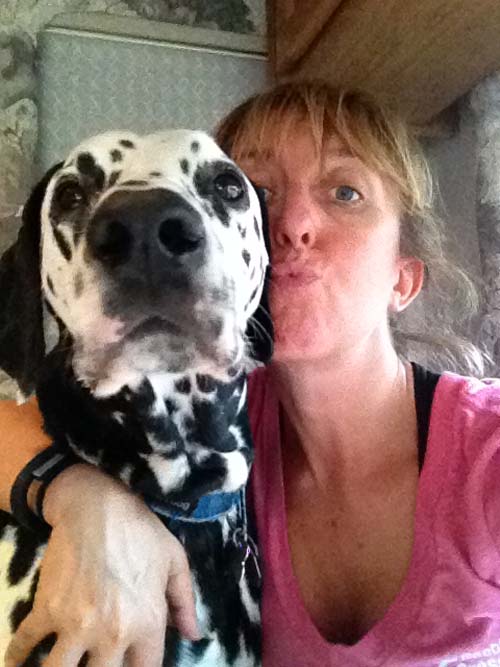 One thing too was the bikes. We had a tree outside we could lock the bikes up against but I had only packed 1/2 of the bike lock. I didn’t know it had a wire part and just grabbed the “U” lock. Thankfully we had a big chain in the compartments so we locked them to the tree with the chain and lock. Bob and I both slept poorly  and it got COLD through the night. We walked the dogs around the camp for their first walk of the day. 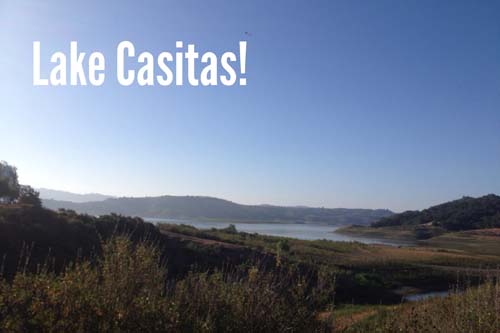 The lake is beautiful! You cannot swim in it however 🙁 We then came back for tea and biscuits. Totally British thing but couldn’t resist when I found these at the market the other day! We drank a LOT of tea this trip 😉 And beer, but that’s a whole other story 🙂 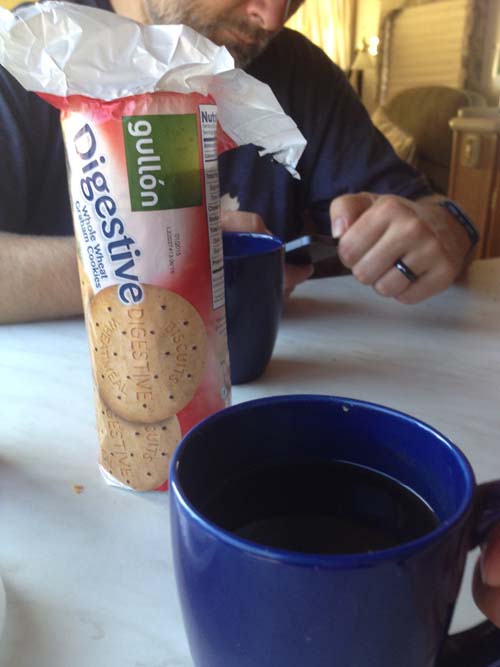 We both read a lot this trip. I took 3 books, and my kindle. I think I ploughed through 5 books this trip. Amazing what happens when you’re not sidetracked by the internet! 😉 Mid-morning Bob tinkered with the slide out and got it working!!! Hallelujah! It makes SUCH a difference having that slide out! Pixel spent most of his time looking at the squirrels… there were a LOT of squirrels… 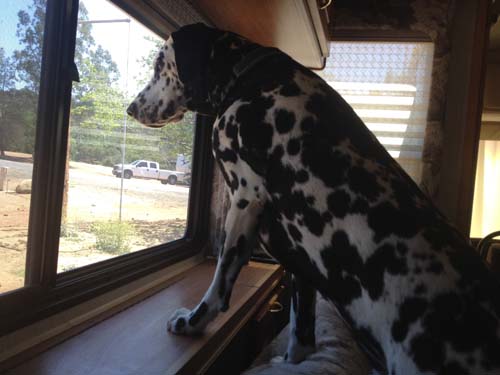 We then did something stupid and walked the dogs at 11, deciding to walk to the store which is 1 1/2 miles away. It was way too hot once we turned back. Poor dogs got burnt feet from the dirt and road terrain. Sky was TOAST! Both of the dogs just crashed out when we got back. 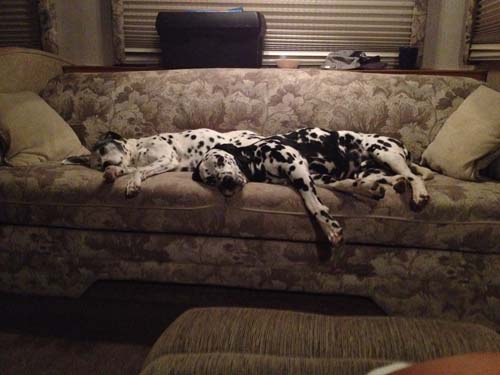 Great to see them snuggling more this trip too! Not that they had much choice with limited sofa room 😉 Pixel was still sore later that night. We’re still not sure if he hurt himself jumping out the RV (he didn’t use the steps!!!) or it was his paws sore from the walk earlier that day. We had a nice walking route around the side of us that was a disc golf course. 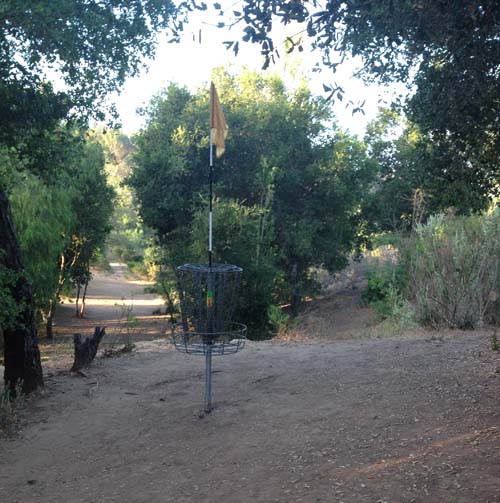 We walked the dogs and Pixel seemed better but still not 100% and now deathly afraid of the RV steps, so we think he landed funny jumping out. So we’re researching dog ramps for future trips. So now not only do I have to carry Sky in/out the RV (she’s 13, vet said no jumping/hills) but now Bob is carrying Pixel out the RV! At 65lbs that’s no easy feat! They are enjoying the walks though, traipsing through the dirt tracks and disc golf course. We always bring water with us too! 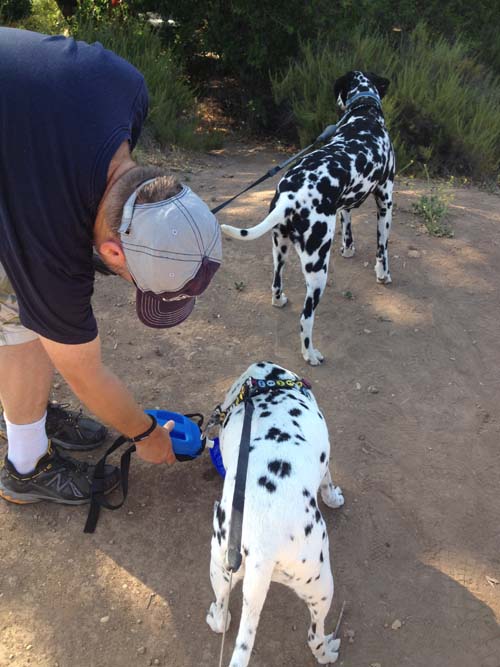 One bad thing about the Fri/Sat was that the campsite got SUPER busy. Like almost EVERY spot was taken. The people down from us were pretty noisy too. As with all trips you learn and we knew not to get this camping spot due to the uneven terrain but also to choose different campsite, and not go fri/sat night again either! Plus the ramps 😉 Also on our list was the water heater leaking 🙁 Seriously we have a HUGE list of things to fix/buy before we go on future trip! It was all worth it for the view though! 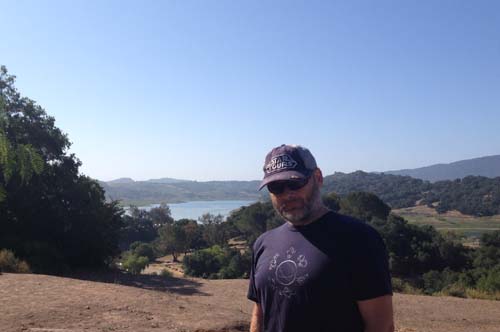 I think the takeaway from this trip is we both spend too much time online, not engaged in the dogs or conversation. It was nice to get offline and talk, read and chill out. I could definitely see us doing this again, midweek! 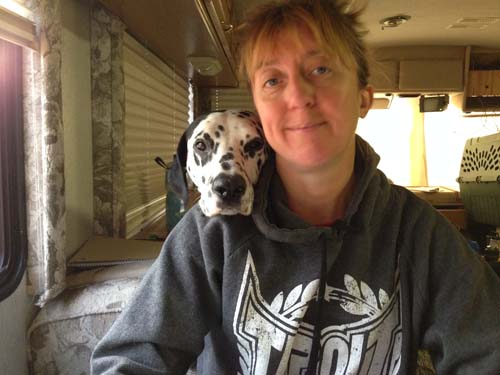 By Sunday lunch lots of the people left and there were TWO RVs left, one was ours! Ghost town! We took the bikes out for a 10 mile ride around the lake. I wish we’d done more hiking/biking but the weather was HOT and the weekend traffic was busy. 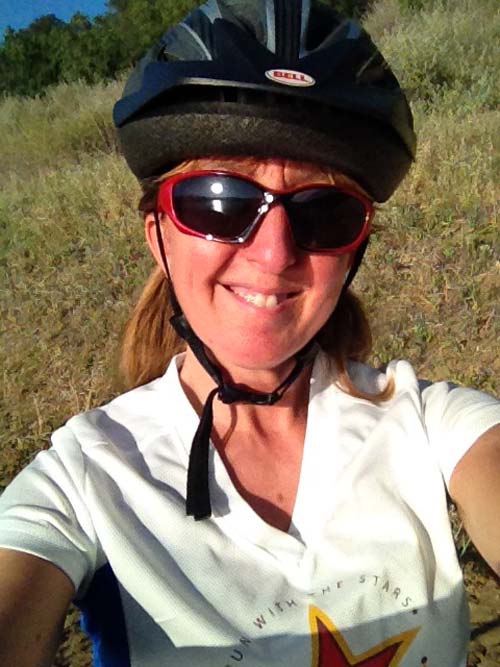 On the way back, Bobs chain fell off and he fell off his bike, couldn’t unclip in time. He’s grazed his elbow and knee and a little bruised on his ass. The view from that side of the lake though at sunset was awesome! 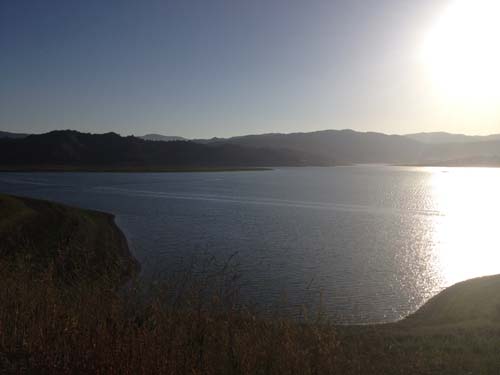 Monday morning we packed up and headed home, but not without more drama. The slide out awning fell off the roller. A duct tape fix got us home, but we have a long list of stuff to do for any future trips…