So back in what seems like the dark ages, I announced I had signed up for a triathlon! Training begun. Months of running, cycling, pool swimming and ocean swims.  Well last weekend on the 18th September I dragged myself out of bed at 2am to grab food, gear and head down to Zuma beach in Malibu California to line up with thousands of other crazy fit people for the 30th Nautica Malibu Triathlon. Disclosure: Links in this post may be affiliate links meaning I earn a small commision on sales through the links. This pays for website hosting, race entries and new camera equipment! 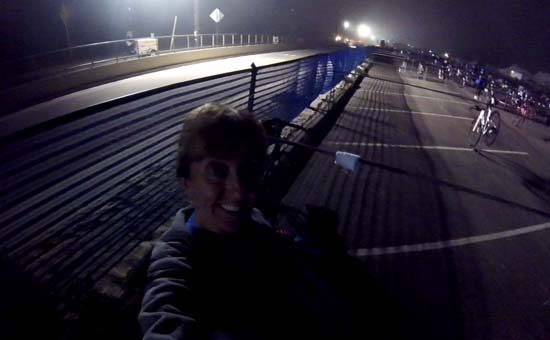 We’d removed some of our morning hassle by opting to take our bikes down to the ocean front on the Saturday when we did packet pick up, which was a smart move. Sunday morning we arrived early to get a good parking spot and then waited.  The event started at 7am but honestly the time flew by. Laying out the clothing changes, bathroom breaks, hydration, food timing and figuring out transition logistics as well as meet-ups post race. We changed into our wetsuits at 6:15am and then headed to the morning briefing followed by the national anthem sung by Rachel Platten!!! Yup live on the beach at Zuma at 6:45am Rachel Platten was singing the National Anthem, and then followed it with her hit, and anthem for cancer patients everywhere, “Fight Song“. As someone whose family has been impacted with so many health issues, including various types of cancer, this song is pretty fucking powerful for me. Plus the whole event is a charity fund raiser for the Children’s hospital of Los Angeles, specifically the cancer research so this was just an amazing choice of performer and song!

After that “go kick ass” send off from Rachel Platten we all walked to the swim start and at 7am the wave starts began. I knew I had a wait ahead of me as Bob was starting at 7:20 and my age group wave didn’t start till 8:15, so it was time to cheer the other athletes on. This was amazingly inspiring as I got to see the challenged athletes start their swim. So I got fired up by “fight song” and now the ass kicking challenged athletes starting their triathlons. In my head I stood there thinking “you got this!”.

Honestly 8am came round much quicker than I thought, and before I knew it I was standing in my age group coral with all the other women wearing green caps. At 8:20am the gun fired and I ran towards the ocean with mixed emotions. Partly thinking “yeah, here we go” and also “we’re all fucking crazy”. It was at this point I realized the GoPro I’d charged the night before and laid out on my towel was still sitting in the transition area and not on my wrist as planned… shit!

Never mind who needs photo’s of the swim, and the ocean right? Because honestly you wouldn’t have seen much as it was foggy. This was a mixed blessing. Foggy? Great, cooler temperatures for the bike and run! The ocean was a warm 66 degrees, however due to the fog, the visibility was crap and could easily freak you out if you stopped and thought about it too long. First buoy and we’re 150 yards out and can’t see the shore… um, if not for the lifeguards and the 50+ people around me… that would have been a total freak out moment. Then, I heard my husbands voice in my head “just focus on your technique” so I out my head down, got the technique then like Dory said “just keep swimming, swimming, swimming. What do we do? We just keep swimming.” 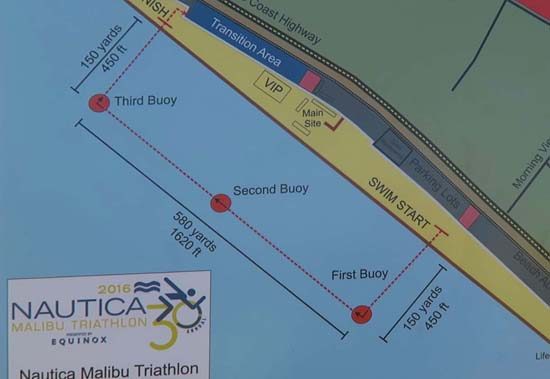 The fog was a little disorienting as it felt like we were headed out to sea for a long time, when in fact we’d turned (according to my Garmin!) but it did not feel like it. Buoy # 2 appeared, swim to that! Then I saw a final buoy and off to the right I could just make out the tents of the expo on the shore! Alright just need to swim to shore, it’s there… somewhere. Swimming to shore was tough. In the time that the first wave had gone the waves had changed, and as one lifeguard put it they had become “more… active”. Ha! Funny guy! I remember swimming to shore with a small group around me, then hearing lifeguards near the breakers saying “swim, swim…. WAVE!” and then that all too familiar feeling of swimming but being pulled backwards… we were stuck in a breaker wave, it was gonna crash right on us.

Yep, I got tumbled a little. However it had happened in training, and I knew I’d be OK as long as I didn’t panic! Just get up for air and QUICK in case there is another wave coming. I came up, took a breath, started swimming and SLAM! Wave #2 hit. Shit, really? This one took me with it more than crashing ON me, and I kinda body surfed in it the best I could. Plus they do say that the ocean is nature’s neti pot! After that, I saw others standing and trying to walking in, I tried but it was tough to walk in, the undertow was strong, plus we’d just swam 850 yards then got slammed again. Wave #3 pushed me to shore and I staggered onto the beach and to the swim finish. I’d done the part I’d been most worried about, the ocean swim, now it was time to face the bike…

Part two (the bike) will continue tomorrow, but I just wanted to take a moment to mention and thank Swim Elite for their awesome goggles during my triathlon and training. They sent me a pair of their goggles back in March when I took part and WON their video contest. I’ve also recently become their first brand Ambassador! 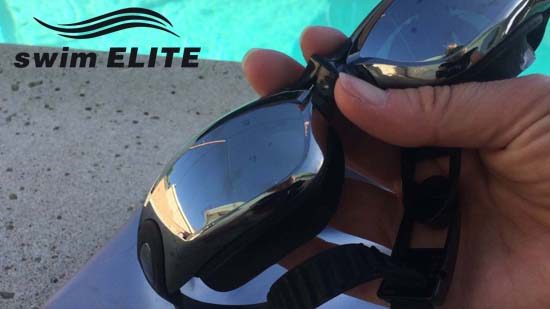 I’ve used the Swim Elite goggles for pool workouts, and for my ocean swims and truly they are the best goggles I’ve used, not only that but they have amazing customer service! The goggles have a choice of different mirrored lens, an interchangeable nose piece and the unique clasp at the back. Plus they come with a carry case and swim cap (unfortunately I had to wear our team hat for training, and wave hat for the event).

The good news is that the Swim Elite Team are letting me do a giveaway so you can win your own pair of Swim Elite Goggles! Enter using rafflecopter below by leaving a comment, share, following and tweeting then on 14th September one lucky winner will be chosen! Good Luck! *US residents only, sorry!