In March Bob went to a conference in San Francisco, and while he had the trip booked a while in February I decided to bite the bullet and go with him. It’s been 20 years since I went and I figured it was a good opportunity to take some R & R. We stayed at the beautiful Adagio Hotel, a Marriott Autograph Collection Hotel, which is just two block West of Union Square. Bob would be at the conference during the day, so I busied myself doing all the tourist things exploring the city .  I’ll share those details in another post soon, but today I want to focus on eating vegan in San Francisco! 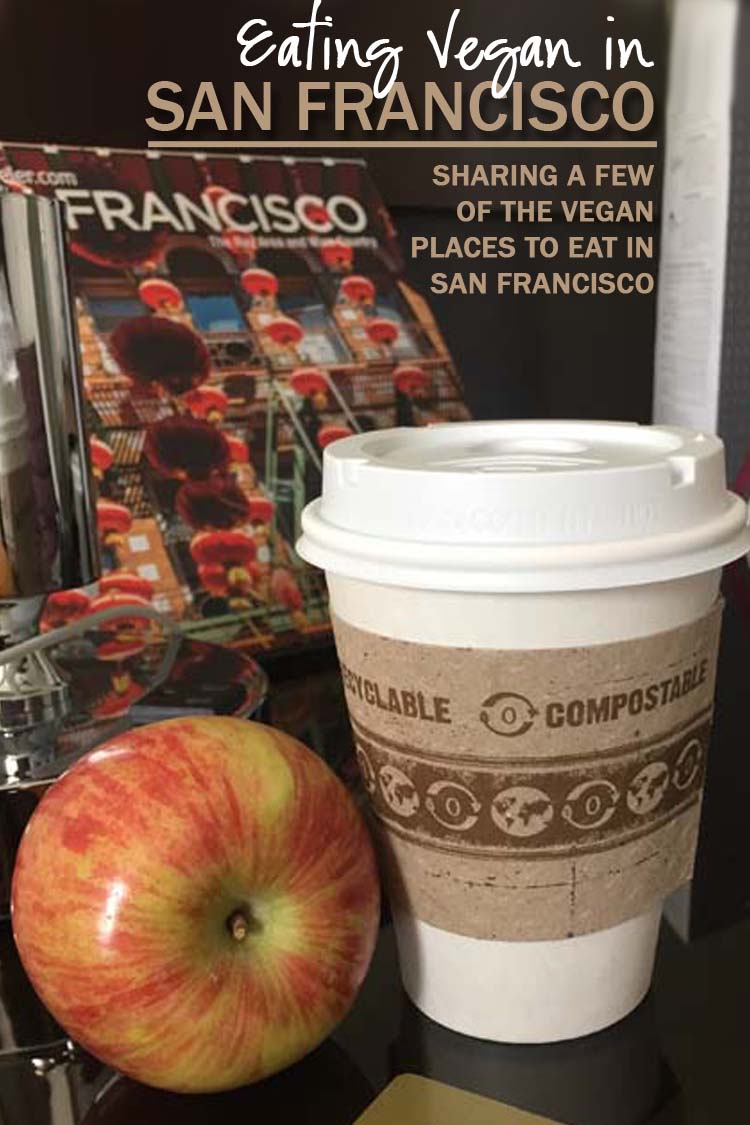 Eating vegan anywhere, let alone traveling,  can be easy if you research, plan and are willing to try new things. For breakfast we chose to eat at the hotel, with just a bagel, OJ, and a cup of tea. Thankfully there was a Trader Joe’s just off Union Square which we were able to buy some healthy vegan snacks . Eating vegan in San Francisco was actually pretty easy. Bob had been to the bay area previously but this was his first time as a vegan so we did some research before we went and ate some pretty tasty meals! 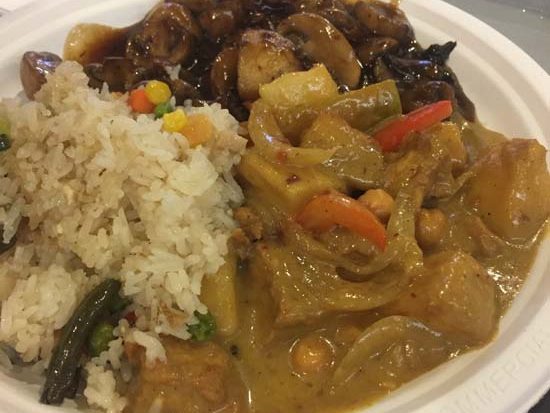 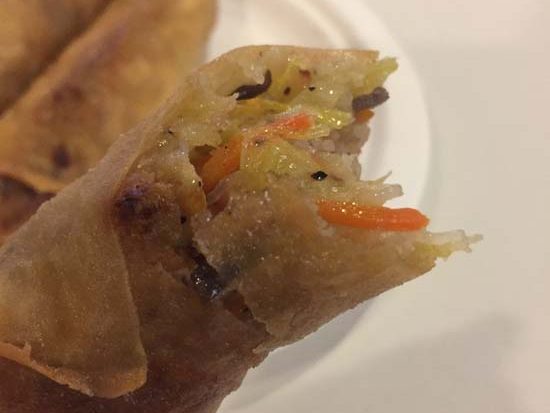 After checking into the hotel it was almost dinner so we went in search of our first meal in San fransciso! Being near Union Square there was no shortage of shops, and there is a BIG Westfield Mall. Inside the mall, is the usual food court and this one has a vegan place called Loving Hut. Being a chain Loving Hut currently has 200 locations in 35 countries, with 38 restaurants in the US alone. For our meal we had the Spring Rolls, and the Steamed Table Combo (two items with rice). The Spring Rolls we delicious, and our Sweet potato curry, mushrooms and rice really hit the spot! Definitely recommend.

Our first full day in San Francisco I was busy sight-seeing at Pier 39 and skipped lunch, opting to graze on an apple, and a clif bar. So by the time dinner rolled around I was RAVENOUS.  We decided to hit up a place called Golden Era that was just a few blocks away. Although this was not in the best of neighborhoods (definitely don’t walk there, get a Lyft/Uber) we really enjoyed it and ended up going there twice! The first time we had the drumsticks, chow mein and rainbow salad. Plus we took a slice of the Oreo Cake to go, and devoured it later. 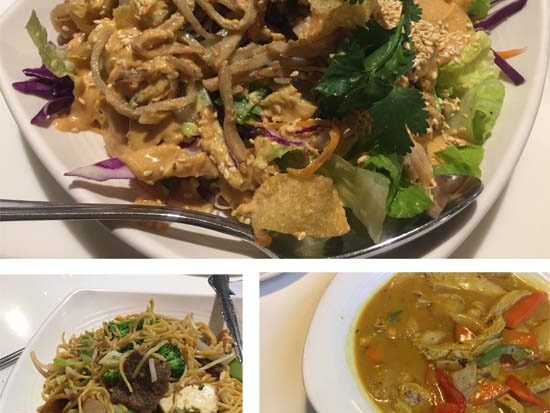 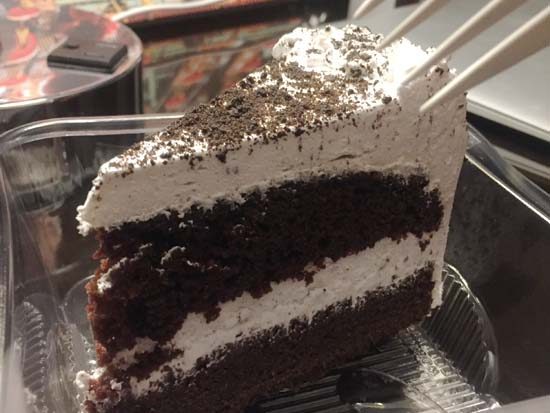 The second time we opted for Golden Rolls to start,  Bob stuck with the rainbow salad as he enjoyed it, and I went for sweet potato curry with noodles. Very tasty, but definitely do not walk through the Tenderloin area. This was our first time using Lyft this trip and it was super easy and very convenient. 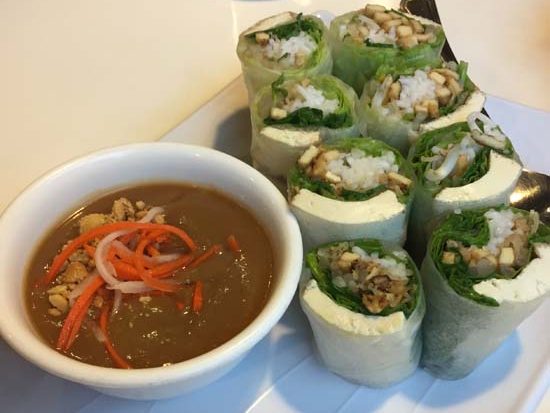 We like checking out places that get recommended and this place came highly recommended to Bob so we checked it out and we were NOT disappointed. The Flying Falafel is a little hole in the wall place. There is some limited seating outside but that’s it, it’s a grab and go place. However, the food is AMAZING, all vegan, and super busy. I had the signature “Flying Falafel pocket”, a freshly baked pita full of veggies, with falafel balls and sauces. Eating vegan in San Francisco never tasted so good! In fact so good we went again for lunch a couple of days later! 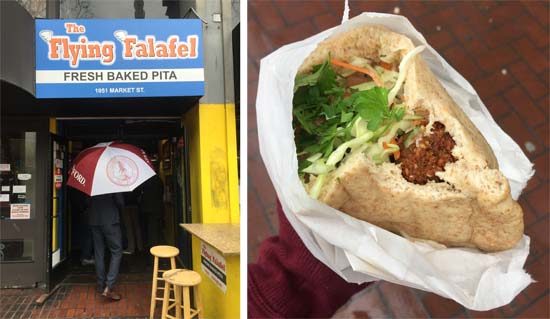 Wednesday I had a full day planned touring Alcatraz and ended up walking to Pier 33 via the Embarcadero at the Port of San Francisco. In the ferry building I happened upon a place called Urban Remedy selling vegan “to-go” food. Exactly what I needed! I snapped up “The VLT” to dig into. Though vegan, organic, non-gmo, and gluten free it was a little oily for my tastes. I love that this option is available though if vegans need something on the go. 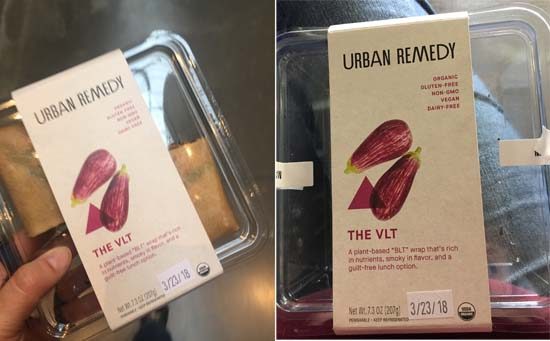 Wednesday night we were just too beat from long days and decided we did NOT want to leave the hotel room. So we did something we hadn’t done (talk about a week of firsts!) and we ordered delivery online via GrubHub. The place we chose was called Vegan Picnic, somewhere we’d looked at going but as it closed at 6.30 we knew it would be tight, so opted for delivery. While it took a while (40 mins) it was exactly what we needed. We ordered the VP burger and the Crispy Chicken. We ordered one of each side (macaroni salad/creamy coleslaw) but ended up getting two coleslaws which was a little disappointing but I ate both anyway. I really wish they did fries as an option also though. We were Jonesing for some french fries that night! 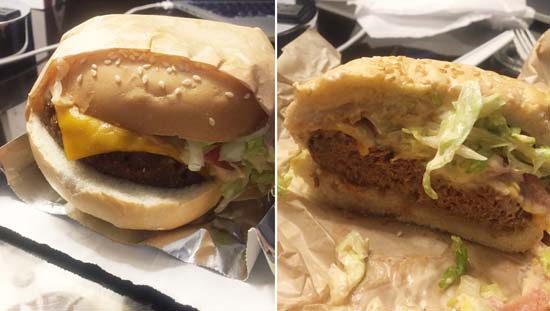 Academy Cafe at the Academy of Sciences

On my last full day sightseeing I took a bus to Golden Gate park to the Academy of Sciences. On their website they link their dining options and one was the academy cafe with vegan options and things that could be made vegan. Score! I had initially planned on getting burger and fries, but upon getting to the cafe saw that they had a flier with the vegan options and no burger was listed. Although I looked, I couldn’t find any of the vegan sushi. So instead I opted for their 3 bean chili in a bread bowl. Personally I’ve never been impressed with chili from a restaurant in the US. It all seems bland and more what we in England would call stew. Not spicy at all. The bread bowl made up for it, and the beer I washed it down with helped too. Overall a good meal, but not the one I was looking forward to. 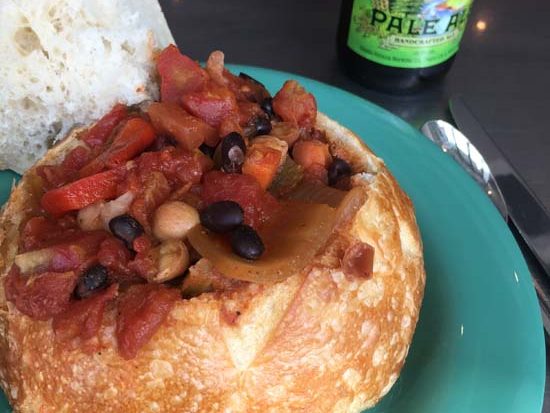 Bob’s conference was at the Moscone Center and directly opposite was Z Pizza. Somewhere I know does vegan pizza! Every day when Bob and I discussed dinner plans, I would suggest pizza and get vetoed. Until the last night when we devoured a large pizza between us. We had vegan cheese, sweetcorn, red onion, mushroom and pineapple and we both thoroughly enjoyed it. Down to the last bite. Z Pizza is a chain with multiple locations nationwide (details on their website). Definitely recommend for vegan pizza! 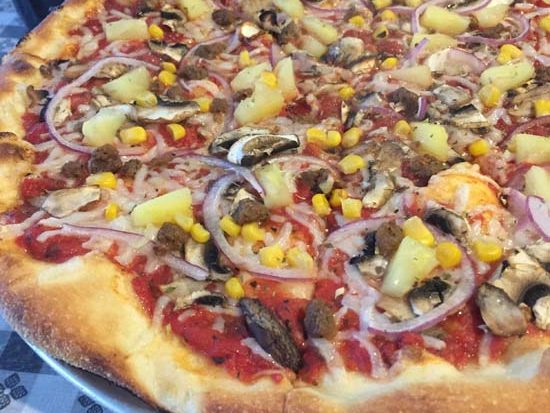 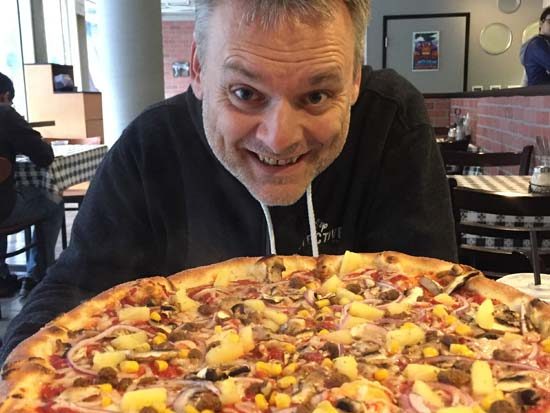 Vertigo – My life is spinning out of control
Next Post: Exploring San Francisco alone