Happy Meatless Monday! Whether you are vegan, vegetarian, reducing your meat intake or just veggie curious welcome to another post on proving that vegan doesn’t mean deprived. In the ongoing saga of my reignited passion for BBQing today I bring you another recipe. I‘ve already mentioned that recently Gardein sent me a bunch of products for free, to use for Memorial Day BBQs. And today I am sharing a recipe for vegetable kebabs using Gardein Teriyaki Chick’n. Perfect for any Memorial Day BBQ! 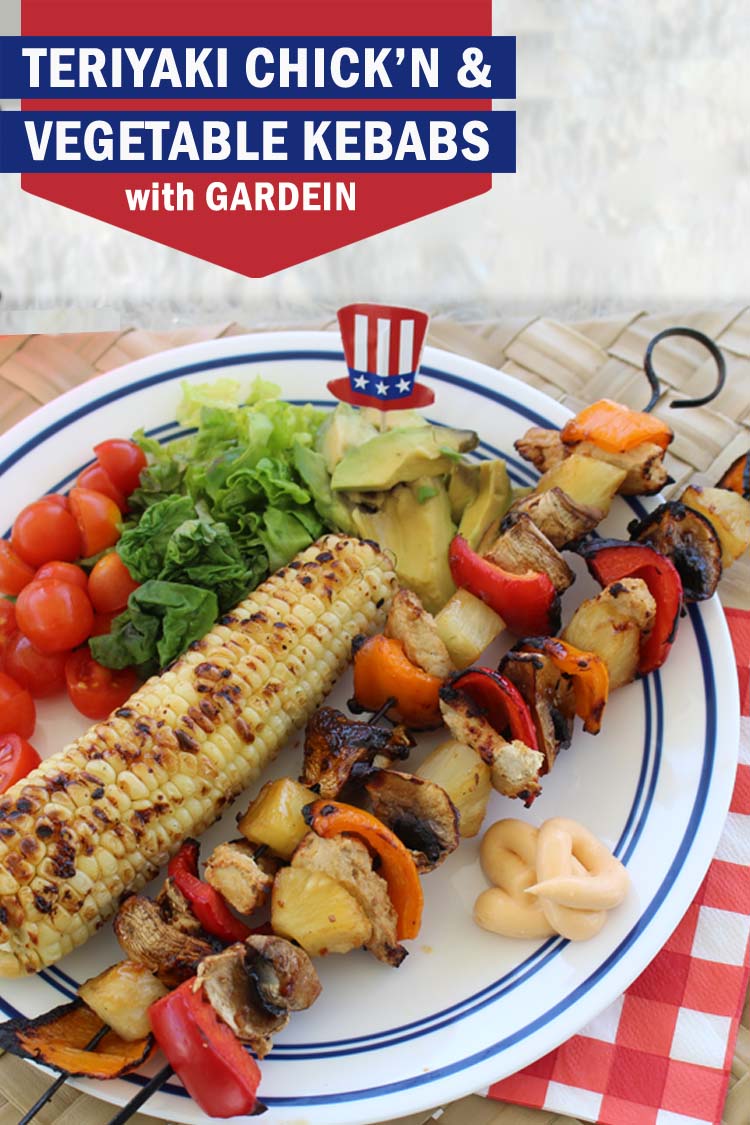 As I mentioned Gardein sent me a bunch of their products, but this is no way influences this post or taste test as we already use Gardein on a regular basis. Their vegan fish is the bomb-diggity, and I have more recipe posts coming soon including Gardein and non-Garden products! If you are having a Meatless Monday Memorial Day BBQ then also check out my recipes for Portabella Pizza Burger and Sweet and Tangy Pita Pockets to spice up your typical BBQ fare. 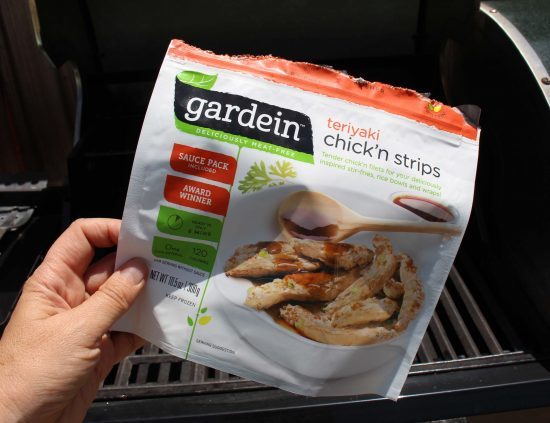 Obviously for this recipe you are going to need Gardein Teriyaki Chick’n and some vegetables. I’m a lover of sweet and sour, and so I opted for mushrooms and peppers paired with pineapple and the Gardein Teriyaki chick’n. However, you can use whatever veggies float your boat. Don’t forget sides too! I LOVE LOVE LOVE BBQ sweetcorn so that’s always a staple when I’m grilling. I also added a small side salad. 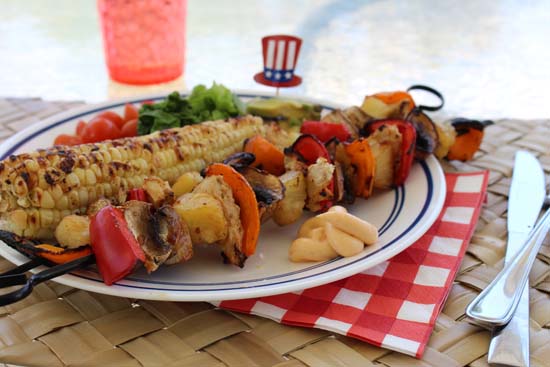 The Gardein Teriyaki Chick’n is pretty convincing at first glance. Don’t be fooled this is all plant based. Allow the strips to cook for a little while so you can skewer them for the vegetable kebabs. If you defrost them they’ll end up… smushy. Pretty much the only word I can think of to describe it. If you par-cook them they end up having enough substance to skewer! 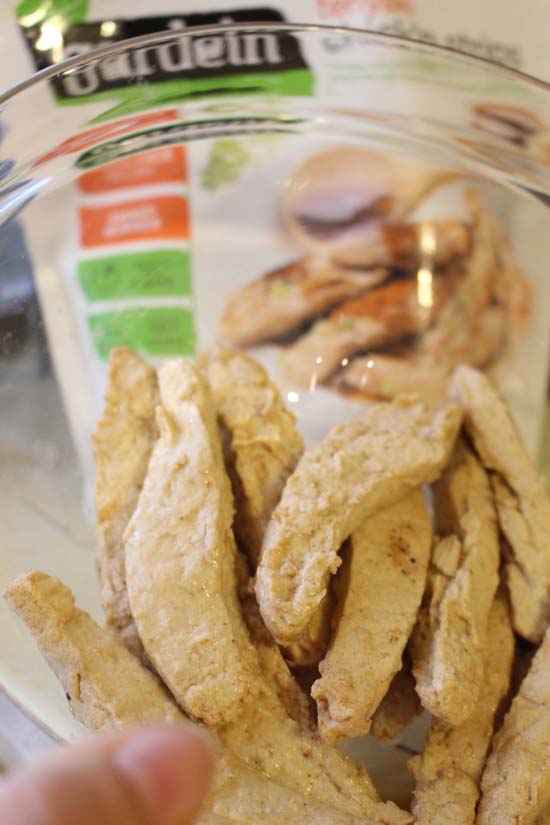 Once partly cooked, the Gardein Chick’n strips just slide right onto the vegetable kebabs, so it’s time to assemble. I alternated red and orange peppers, with quartered mushrooms, and pineapple. The pineapple adds a little sweetness to counter the tangy teriyaki. 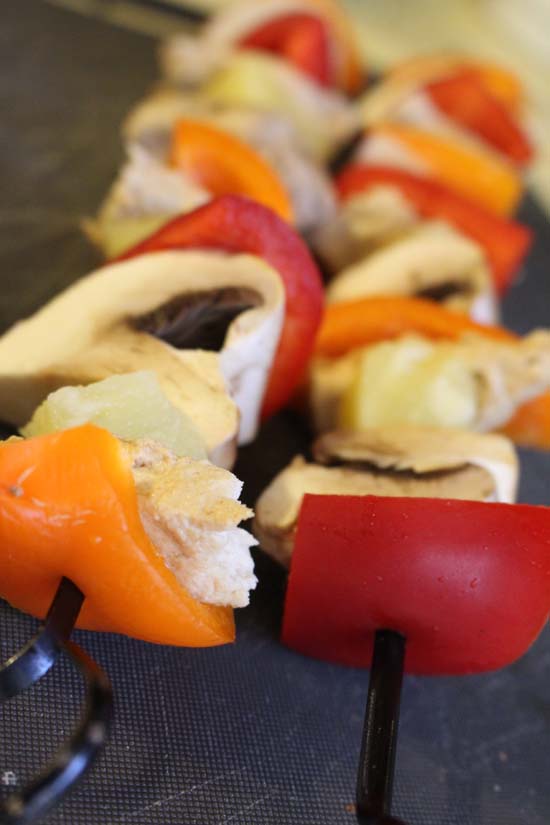 Gardein provide a sauce packet which at his point, if you’ve used the directions on the bag, should be thawed and ready to use. Once the vegetable kebabs are assembled brush the teriyaki sauce all over them. I love using the BBQ kebab skewers as they make the veggies much easier to handle both on and off the grill (i.e.: less likely to burn myself!). If you are looking for a BBQ kebab set we have this one from Amazon affiliate link 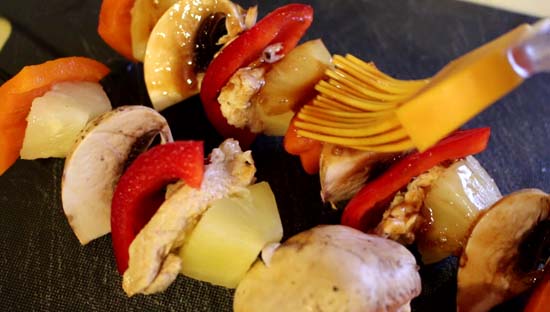 Ensure ALL the veggies and the Gardein Chick’n strips get a thorough coating. I added some teriyaki sauce to the sweetcorn for good measure, because you can never have enough seasoning. Then I took everything to the BBQ for a grilling session. I had already set the kebab rack on the BBQ so I added the vegetable kebabs and corn and then cooked them through. 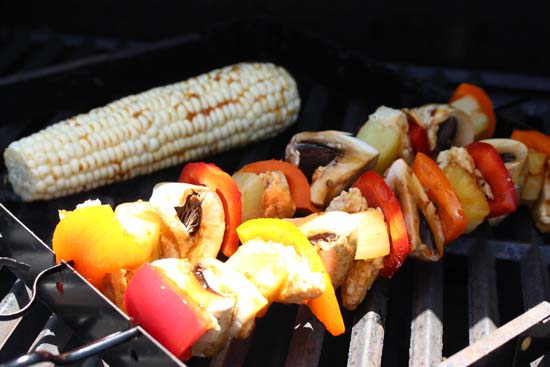 The awesome thing about vegetable kebabs is they really don’t take long to cook. By the time you go set up the table things are grilling and caramelizing nicely. Having the kebab rack means I just turn the skewers around to ensure they cook thoroughly. Easy Peasy. 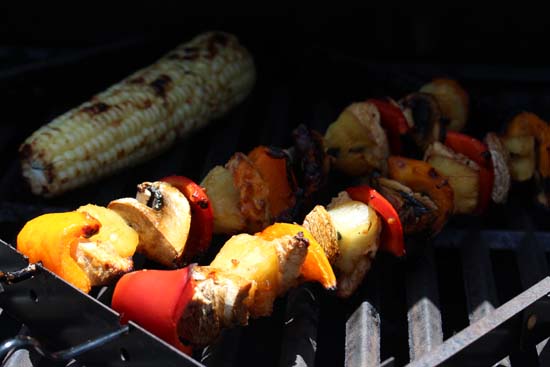 Once the corn and vegetable kebabs are cooked simply add to your plate and serve. I told you this was easy. Seriously I make it look easy because it is! 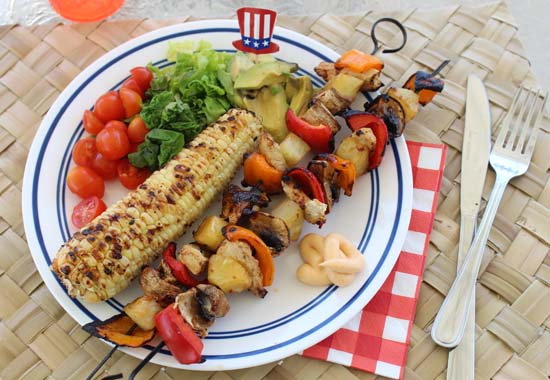 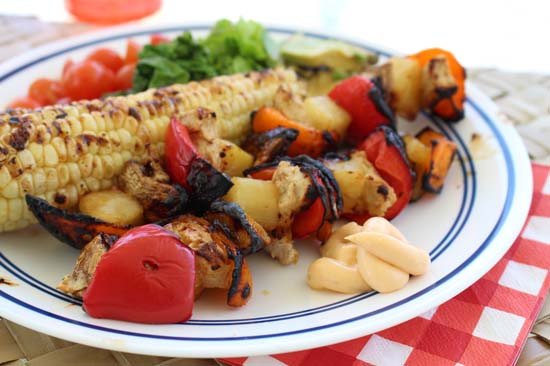 Add sauces and dressings of your choice, I recommend the Just Sriracha Mayo, and devour. I think vegetable kebabs are my new “go-to” for the BBQ. Quick, easy and so tasty! The pineapple was an AWESOME addition! 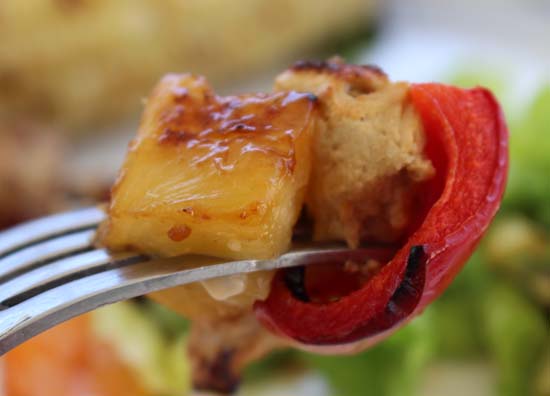 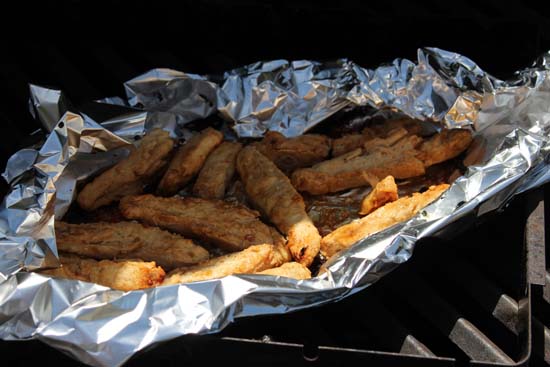 Once BBQ’d to perfection remove and add to a small dish. This teriyaki chick’n is a great addition to any BBQ or Memorial Day party. Whether you are adding them to subs, sandwiches or using them in salads they are a great main or side dish for any BBQ. 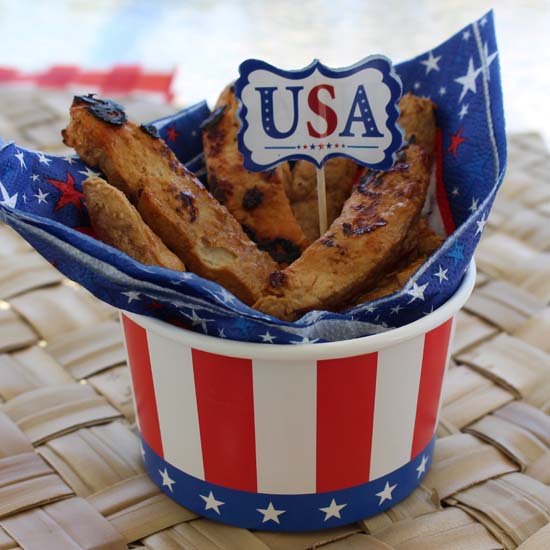 I admit I like them “as is”, sometimes with a little Just mayo. The great thing is that if you cook too many, they keep well in the fridge overnight. If they last that long! I had some in the fridge and Bob used them on a pizza. So when I say they are versatile they really are! 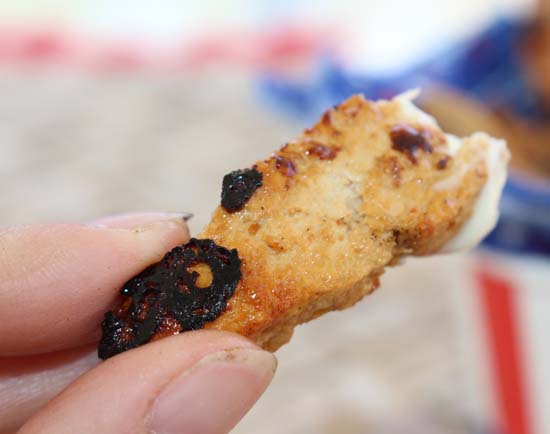 Sweet and sour or just savory on your BBQ?

Do you have a favorite sauce to add to BBQ dishes?

Recipe: Portabella Pizza Burger
Next Post: Building a labyrinth at the beach