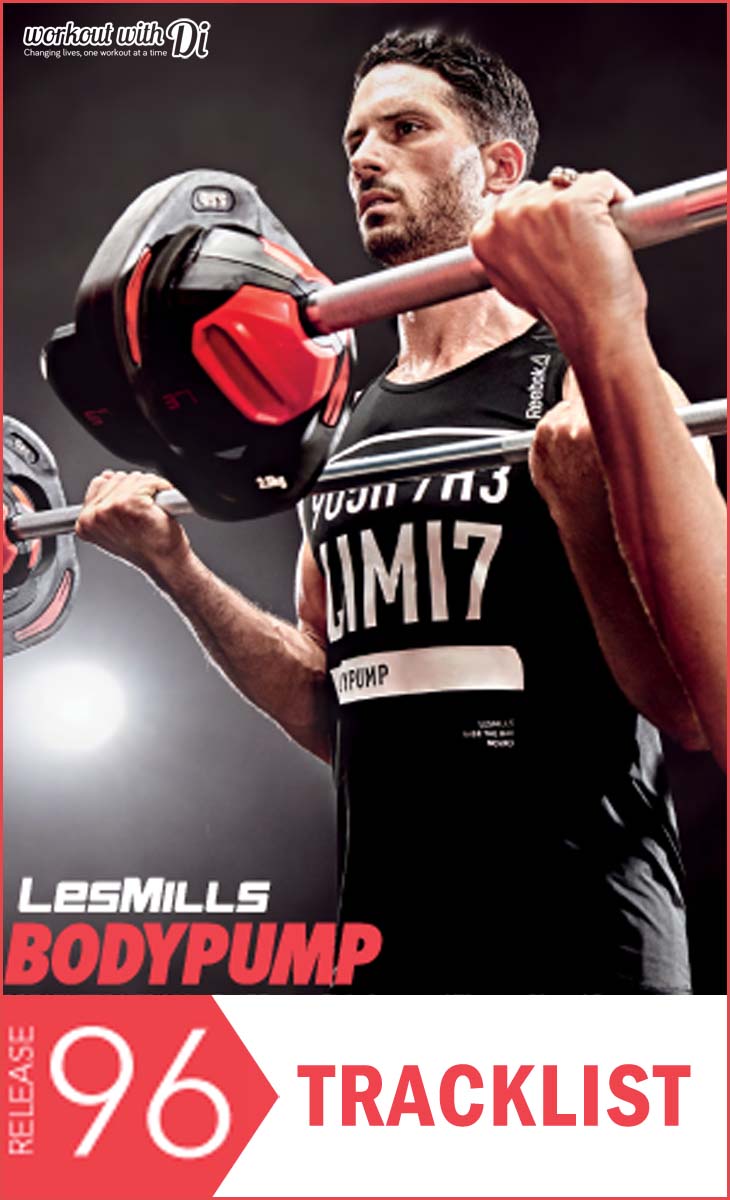 Wait, 96…. already…. Is it really 4 more till the centennial release? Holy heck they better do something amazeball for the 100th release! If you’ve been living on a desert island and don’t know what BodyPump is, well it’s a group fitness class using a barbell, plates and step to get you lean, toned and fit – fast! It’s in clubs worldwide and while the music, moves and motivation may change the format stays the same with the body being worked in specific order to maximize strength and calorie burn. Each quarter a new release comes out with new music, new choreography and a new focus. This is the breakdown of BodyPump 96 track by track, with music, my cliff notes version of the workout for the track and if nothing else I hope you get some fun new music to motivate you to MOVE!

As always in the interests of full disclosure links in this post may be affiliate links, meaning I earn a small commision on sales made through those link. 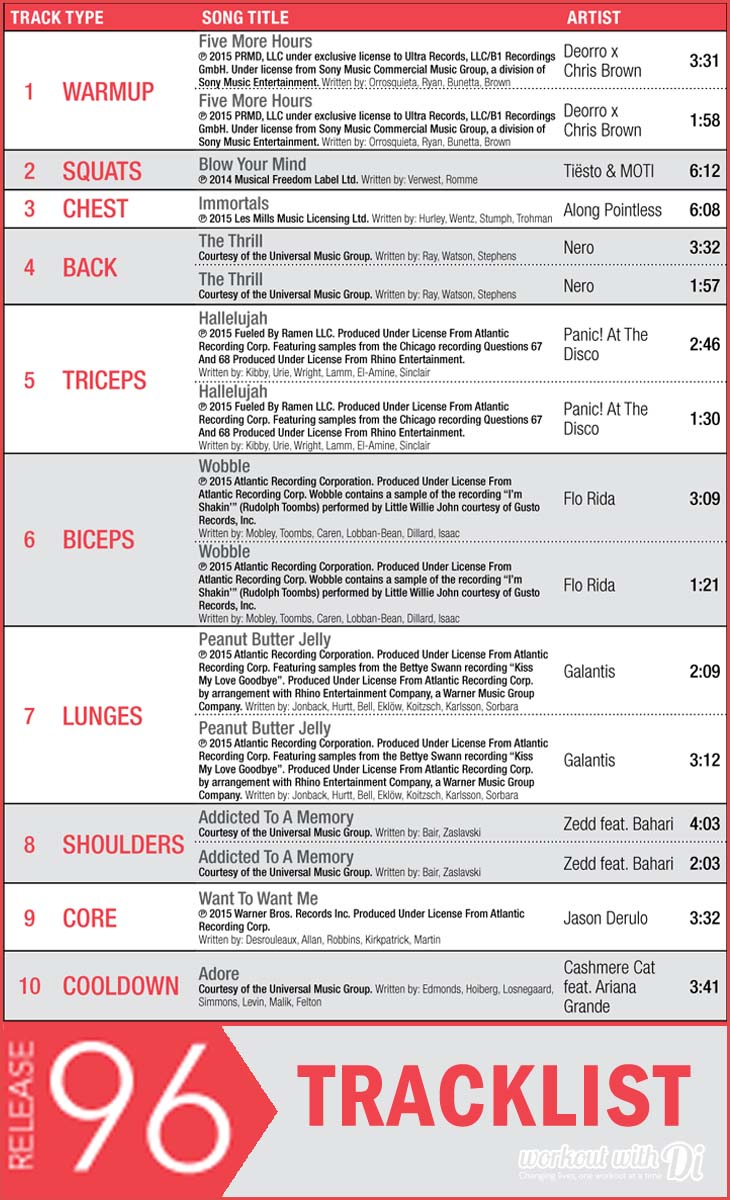 Love the warm up this release! Aside from the quick transition from lunges to deadlifts this is the perfect warm-up for me, and one I will definitely be using again in the future! Loving the power press in the warm up, I might be the only one though as other people I’ve spoken to think it’s too much. What about you what did you think? I

This reminds me of the squat tracks of the “good old days” hahaha! This is very similar to BodyPump 79 which is a class favorite. However, the song is a bust. For squats I know I need a powerful song to push through the burn and lately the squat tracks have left me feeling a little flat and unmotivated! I will say right now though that it’s WAY better than BodyPump 95! That Bukem track was probably one of the worst in BodyPump history IMO! lol! For the squat track of BodyPump 96 I give this a solid 8/10 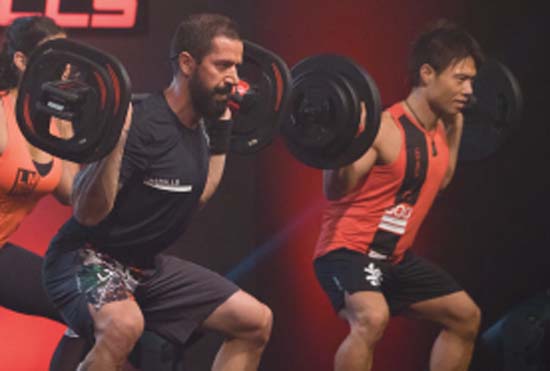 Ok I’m a fan of Fall Out Boy. I know, I know, some people think they are overplayed in Les Mills, like Nickelback. But I like this song. Good for the chest track. Love the superset of the Bar (yes I prefer the bar to the A-Press) and push-ups. My only grind with this track is the fast pulsing. It doesn’t need it. I’ve done it at home with a slower bottom 2x pulse and it works fantastic. It’s harder IMO. #justsayin All in all a good chest track for BodyPump 96.

Weirdly the instructors I spoke to didn’t like this one, but I love it. Song is a little slow in places but it goes well for a powerful back track. Don’t love it as much as 95, or 78, but a good one for the rotation. Nice combo of bar and plate press, giving a good cardio burst. Again reminds me of the back tracks we had back around releases of the mid 80’s (release, not year, BodyPump isn’t THAT old!)

I put this one down as possibly one of the worst tricep tracks ever, sorry Les Mills. For me the song is… I don’t know. I like it, it just doesn’t feel right for triceps. I have no explanation really, it just has a weird vibe/beat to it. What I really don’t like is the fast transitions. Instructors: you HAVE to take out some dips to transition and set your class members up safely in the tricep push ups. Good idea, poorly executed to fit with the song. Again just my opinion, let me know your thoughts on the BodyPump 96 triceps in the comments! 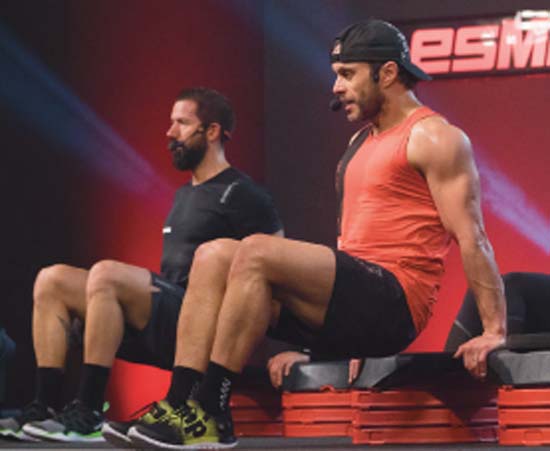 I hadn’t heard this song till this release and wow wouldn’t have pegged this for a bicep song. It’s fast! Like, you need to grab a lighter bar fast! So bear that in mind for your weight selection. Again the triple mid-range pulse, except super fast. Again trust me, go LIGHTER than you normally do or your forearms will be on FIRE!

Say what you will about this song, it gets in your head, it’s poppy and fun. Wouldn’t have thought of lunges for it, but it definitely goes. I actually like the song, and the choreography. The fast pulsing seems to be the theme of the releases lately and I feel like I’m over it. I went back to lunges from 81 recently with the plyo lunges and BOY my glutes hurt for three days! Good solid lunge track though.

This is a hit and a miss for me. I love the return of the rear delt fly, been a while since we isolated that in the shoulder tracks! Anyone else with me? I like the side raise, rotator raise combo but the mix of two combos in the track kinda screwed with members a little. Just when they nailed the first combo we change it on them… I was pretty excited to see the bar superset of overhead presses and push presses, BUT I just felt it was weird coming from push press back to strict shoulder presses. It felt, for want of a better word, “funky”. Nice idea but just doesn’t work in practice.  What did you think? Let me know in the comments!

Nice poppy song but bit of a choreography let down for me. A full track of crunches. There is only so much coaching you can do to push people through this track. It needed switching midway to something else. Or breaking up somehow. In case you’re wondering it’s 3 1/2 minutes of crunches… what did you think?

Usual slow cool down track to stretch, relax and restore. Funny I used to not like the slow ones but since doing more yoga they are growing on me. Still feels a real downer after a class though. Still preferred the more upbeat stretch tracks from BodyCombat 53-59. Can’t speak much for the latest ones as I no longer teach BodyCombat. What do you prefer for the end of class?

So that’s the BodyPump 96 playlist and breakdown. If you’re an instructor what did you think to the latest release? I’ve heard mixed reports from instructors I know. With members the overall opinion seems to be more dislike for the music/choreography for this release than likes. Have you done the new release yet? Let me know your thoughts in the comments.