So as I mentioned already Wednesday was Bobs birthday! One thing we’ve done for a long time (almost the whole time we’ve been together) is to take the day off and just go out and DO something. Sometimes it’s just going to our favorite restaurants, or shopping, but sometimes its a big bonanza day out. This year was a mix of all of them for a fun packed day! Warning: lost post, lots of pics 🙂

We started the day with late breakfast as we’d been up late watching Lord of the Rings, then birthday cards and dog walks. Yep Bobs dedication to his health is showing that he even walked the dogs on his birthday 🙂 After walking the dogs we watched the olympics: mens gymnastics, before heading out for lunch to one of our favorite places Follow Your Heart in Canoga Park. This is one of our favorite celebration places purely because they do an AWESOME vegan chocolate raspberry cake, pics of that later 😉 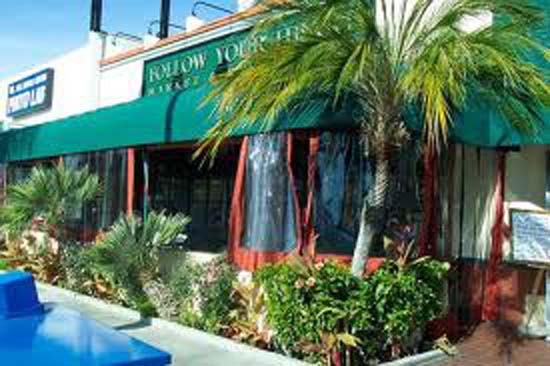 Follow Your Heart is a small place, part store part restaurant. And if you show up at peak times without being prepared to wait then FORGET IT! This place gets packed! And for good reason, the food is GOOD! The store features lots of the usual healthly, vegan and vegetarian foods with some stuff you can’t get anywhere else, or that may be in short supply elsewhere. Namely their brand of ‘cheese’ and veganaise. If you’re vegetarian or vegan you’ll probably know their brand it’s big in the natural foods section. I love veganaise, and mock cheese, mock cream cheese etc. They also have a great fake chicken at the store too! Look for their brand in whole foods and lassens!

We were introduced to their restaurant a few years ago and honestly I can’t remember if Bob found it online and we decided to go, or we were introduced via friends. So long ago. Anyway after going for a few visits and buying their food and grocery products one thing I highly recommend for vegetarians/vegans is their cookbook! Even if you can’t visit their restaurant you can cook their dishes from the comfort of your own home! Available on Amazon bookstore and kindle. 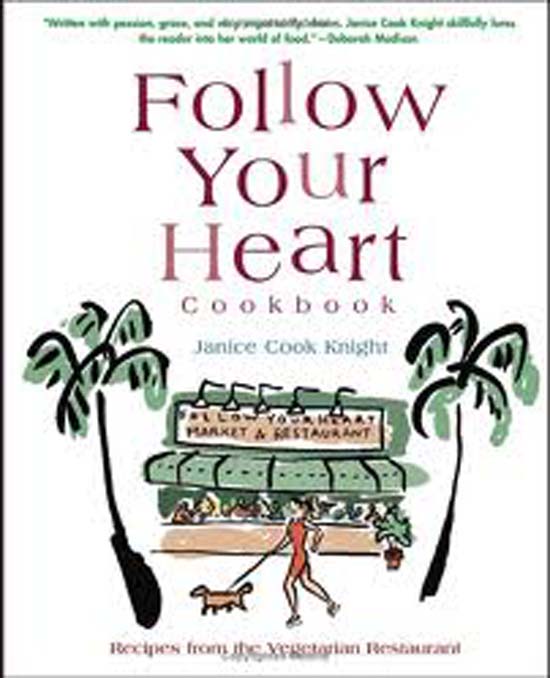 We decided to go for soup to start, they do great homemade soups, fresh every day and different choice every day! Bob had the creamy potato (contains dairy) and I had the vegan mushroom barley. Both were delicious. As we opted to have a shake between us we decided to split an entree, and had the Zorro Burrito: Black beans, braised tofu, jack and cheddar cheese, spanish rice and salsa wrapped in an oversized whole wheat tortilla, served with jicama salad, guacamole and sour cream. 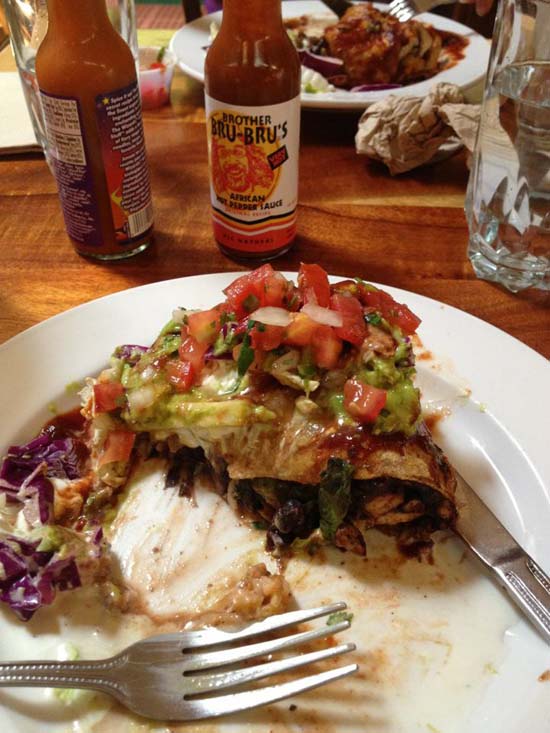 We’d had this before (Ok Bob had ordered this before), so we knew beforehand that the portion size was BIG. As we’d said we were splitting it, the burrito and side salad came on separate plates which I love. Saves the hassle of splitting ourselves and arguing over who has bigger piece or more salad! It was my first time eating this and I thoroughly enjoyed it! 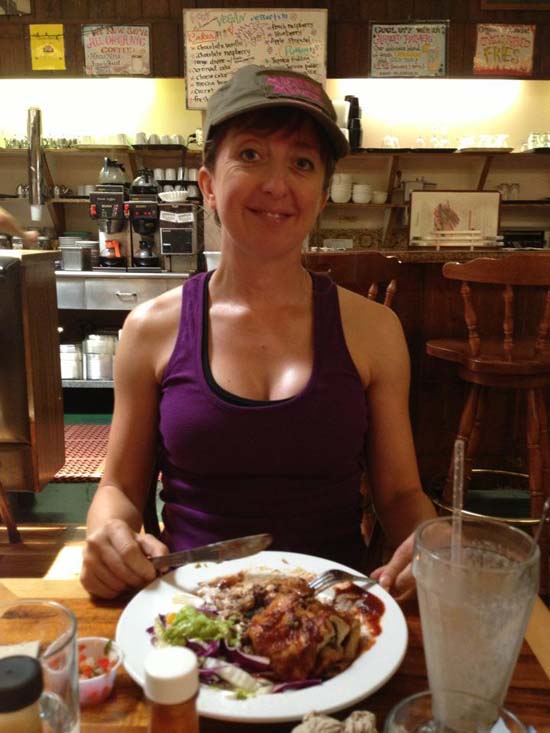 After the burrito we ordered a piece of our favorite cake, to split! Yes we tend to split a lot of dishes, or at least 1/2 and 1/2 our entrees to get a good mix. As the Indian community call it “family style” we’re all about sharing 😉 We waited patiently for our cake to arrive so perfect time to snap birthday boy pics! 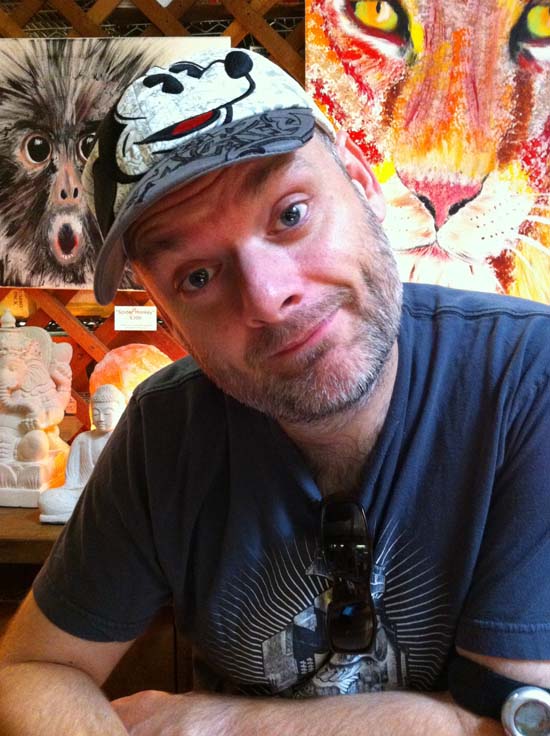 Follow Your Heart cafe features work of local artists. I wasn’t that impressed with the artwork on display this month but I did like the monkey painting behind Bob! Two monkeys in one shot 😉 Wasn’t long till our cake arrived, so worth the wait…. 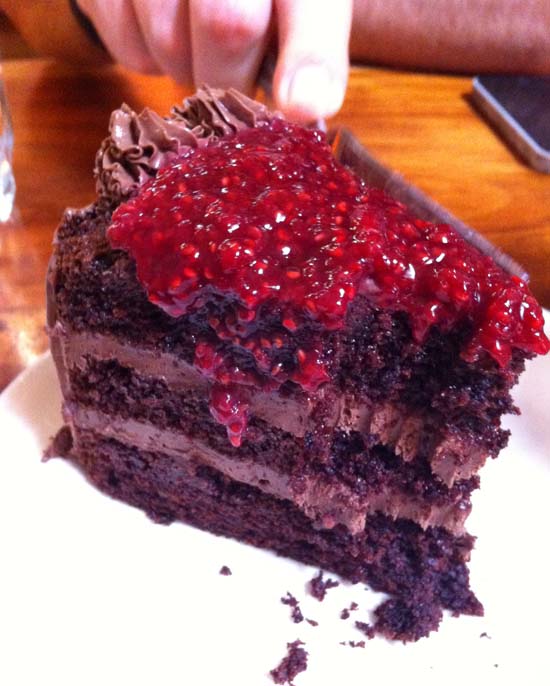 Now let me say, if you order this order ONE piece between 2/3 people. It’s rich, but deliciously so! We’ve ordered this many times and absolutely love it. The chocolate vanilla cake is good also 😉 Between us we soon demolished this piece! 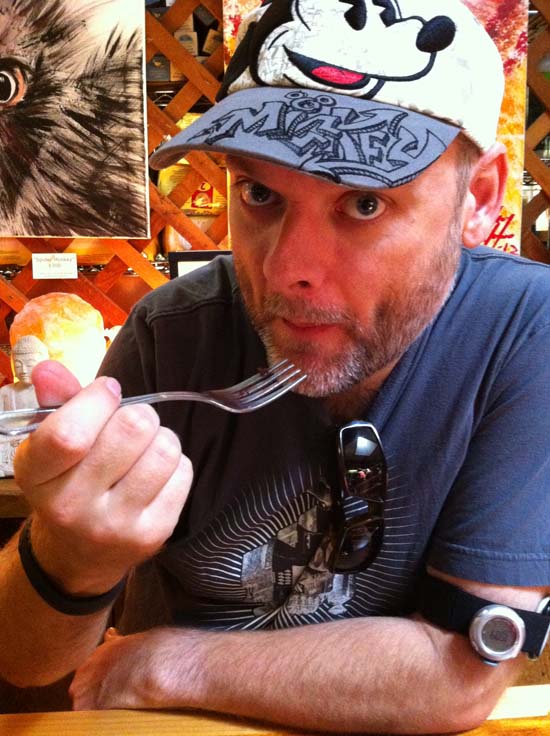 After paying for our lunch and visiting the bathroom (downside of a busy restaurant, busy bathrooms!) we headed to Anaheim. Traffic was a little busier than we’d like but we made it down and our first stop: Company D! This was my second visit to Company D, and for those not Disney fans Company D is a discount store for Disney Employees. It’s 50-75% off and lots of end of line clothing but also a chance to buy pieces of memorabilia from Disneyland, from the cruise ships etc. On this occasion we scored an acrylic display from the Old Ride “California Soaring” I think it was called. Nice 5-6ft display of the Golden Gate bridge. It’s meant to be backlit. The good part? It cost us $6 🙂 We also got jackets, bags and t-shirts. Cast members only though (Bob works for Disney) so if you know someone that works at Disney and are down Anaheim way check  it out! I scored some great hats, bootcamp style for $2 each! 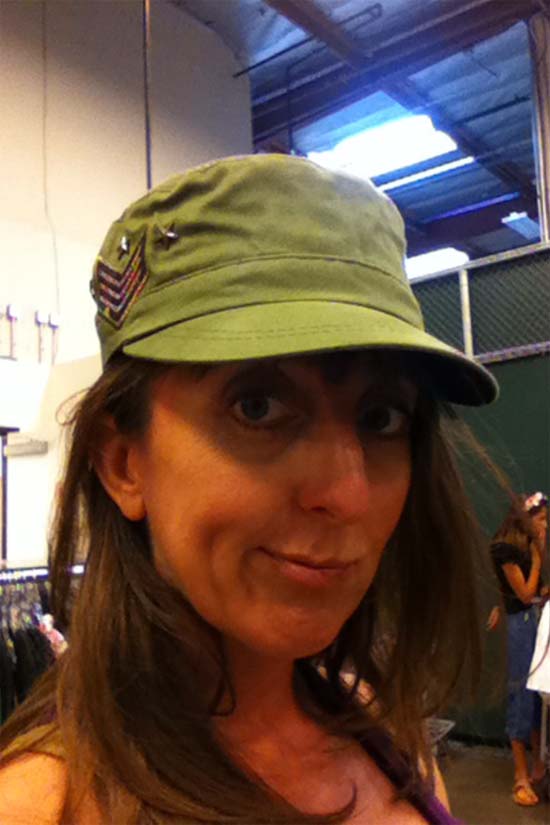 After leaving Company D we headed to Disneyland. Yep as an employee Bob gets us free parking and free entry plus discount inside the park on merchandise and food 😉 Awesomeness! Our first stop was California Adventure, our reason for going: CARS land! Bob worked on the online game so it was fun for him to see the rides as he’d seen it in construction mode a few years ago. 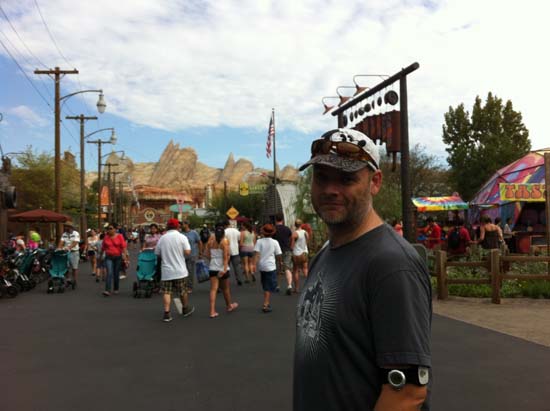 I have to say that Disney did a FANTASTIC job with carsland! It’s like stepping right into the movie! All the attention to detail! They don’t do things by halves. I didn’t take tons of photo’s but Flo’s V8 cafe was so well done! The Cone Motel! Just the thought that went into the whole thing, fantastic. Naturally we were eager to go on Radiator Springs Racers!!! However the line was crazy, but they had a ‘single rider’ line which I definitely recommend if you don’t have kids and aren’t bothered about sitting together. It took our wait time from 2 1/2 hours (yes really!) to 20-25 minutes! 6 riders to a car, the chances of needing a single rider are pretty high! So I got on, put on my seat belt and away we went… 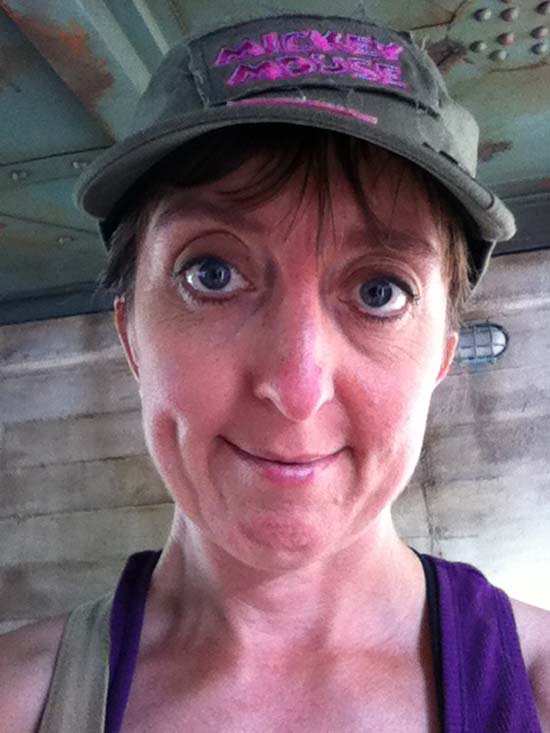 I did do a little iPhone video and that is available on my facebook. I was going to put it on here but figured it’s already available on facebook why put it here and clog my hosts server 😉 After the wait for the ride I was ready for food again, just a snack and was happy to find this place right in Carsland selling healthy snacks! Including fruit and water. I had a banana with a bottle of water, Bob had a bag of BBQ chips and a Coke Zero. The weather was pretty warm (96 degrees when we left Los Angeles, little cooler in Anaheim) so drinking was going to be key! I saved my water bottle and we refilled it at water fountains dotted throughout the parks. 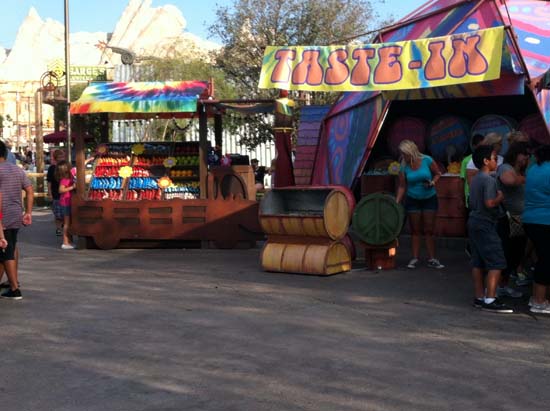 After Seymores taste in we wandered around Carsland a bit, new rides. new stores, new merchandise! Bob almost bought a new jacket but wasn’t sure about it so he left it. I always say if it’s not 100% something you want, then leave it. If he changes his mind we can go back 😉 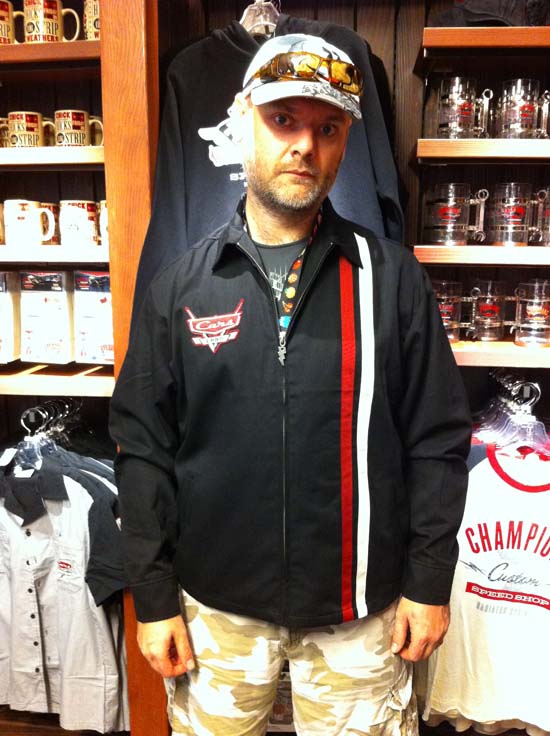 I saw a great handbag made from seatbelts but at $108 it wasn’t something I liked THAT much! All things Cars related in Carsland though so if you like cars the movie, or cars in general this is the place to go! Next we headed to Disneyland to go on a couple of rides before dinner, as we entered the Parade was just finishing and whilst we picked up Bobs “it’s my birthday” badge (they give these out at Town Hall, employees will say happy birthday to you!) I snapped a pic of the new parade stuff like Rapunzels tower from Tangled. 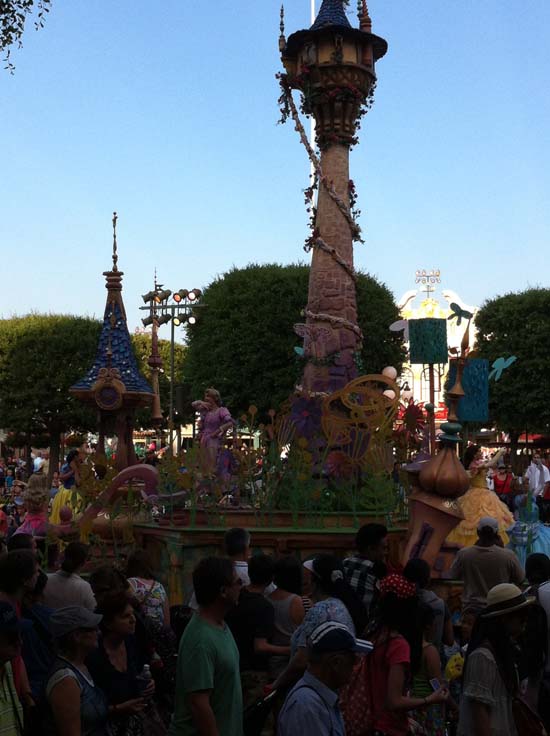 As you can see the parks were FULL! Lots of people! Last time we went was December on Employee Day and it was JUST employees! Totally didn’t fully appreciate it then how quiet the park was. You can bet your butt I’ll be going again this December on Employee day! One thing I want to say about the rides: Haunted Mansion is hands down better at Christmas when it’s decked out for “nightmare before christmas”. Totally didn’t enjoy it as much as ‘Regular” haunted mansion! After the rides we headed for dinner Downtown Disney (we wanted to be back at 9pm for world of color). Dinner was at Rainforest Cafe: 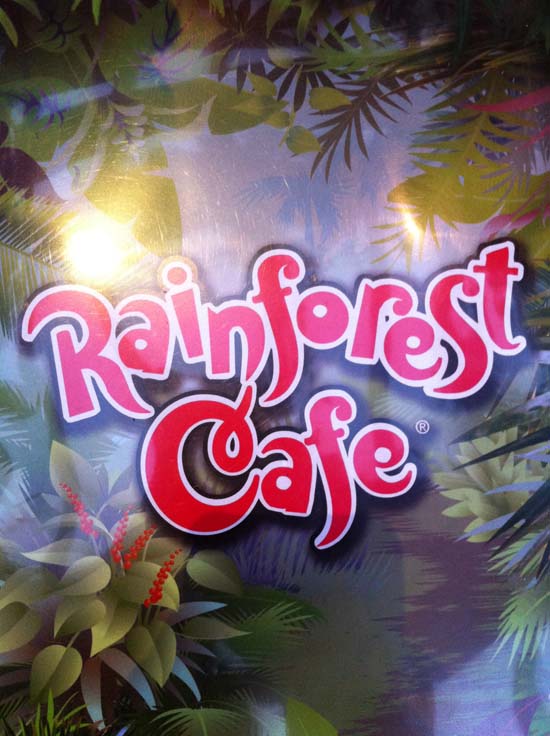 We’ve been to Rainforest Cafe before and I like it there. As it was busy the choice was patio seating (rather than the inside jungle) or wait 1+ hour for inside seats, we opted for the patio 😉 We’ve seen the rainstorms the animals etc so we were in it for the food… and the beer! 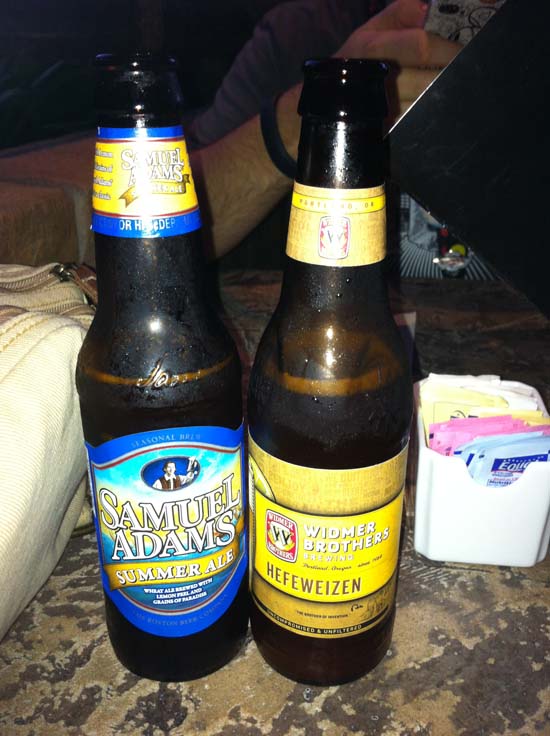 It wouldn’t be a birthday celebration without beer! I had the Sam Adams Summer Ale which was lovely, very like a Blue Moon. Bob had the hefeweizen which he seemed to enjoy! As we’re vegetarian it was the natural burger: A meatless patty of garbanzo beans, vegetables, sesame seeds and assorted spices. Topped with fresh guacomole and served on a toasted bun with your choice of lettuce and tomato. We opted for safari fries rather than chips at $1.49 extra, but worth it 😉 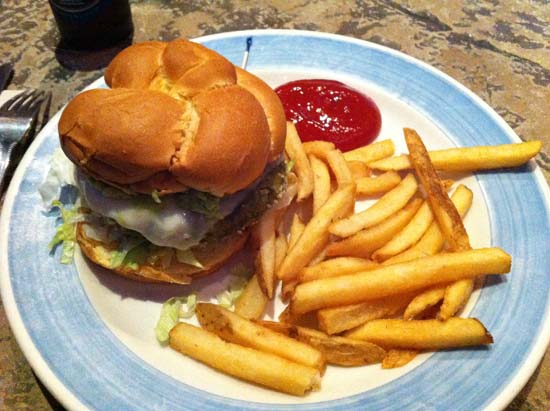 I wish they’d had the option for bunless or gluten free bread as bread tends to bloat me. Normally I’d have dissected the patty from the bun but as I was hungry I devoured the meal when it came! As did Bob who seemed particularly happy to dig into his fries! We don’t eat fries often so happy birthday 😉 Naturally later I was totally bloated and regretted my bun eating, but it was lovely when I ate it. I didn’t even eat ALL the bun, just 2/3’s! Seemed weird having corn syrup laden ketchup too! At home we have the natural ketchup from Trader Joes, no corn syrup. The Heinz ketchup seems VERY sweet in comparison. Bob definitely made short work of his though! 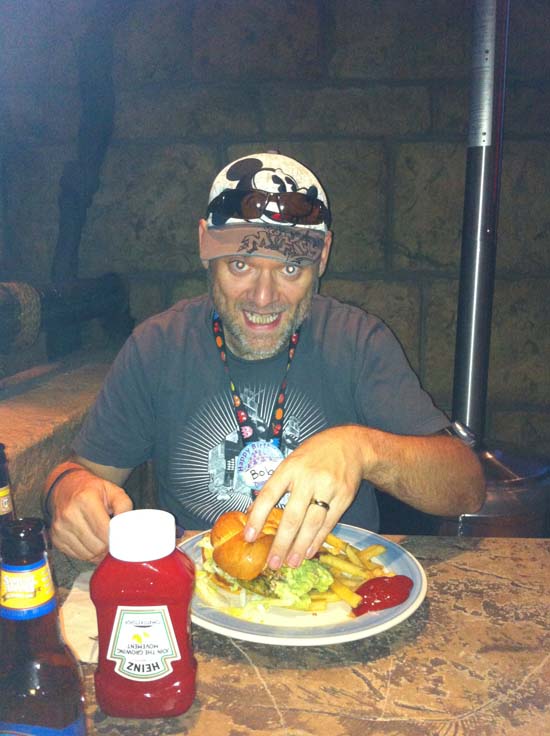 After dinner, we hauled ass back to California Adventure to see World of Color as I hadn’t seen it yet. For those that don’t know it’s a late night show with water, lights, lasers, projectors and fire. I’d heard great things and good reviews about it, but in all it was pretty disappointing. I think our problem is we have a projector at home and projecting onto water just looks blurry, and I’m used to crisp clean images. I get it, it’s on water… cool… but it just wasn’t WOW for me. Mostly just sang along to the music 😉 as normal, lol! Fire effects were cool, but sparse. I got a photo of California Screaming lit up at night though as I hadn’t seen that at night before. 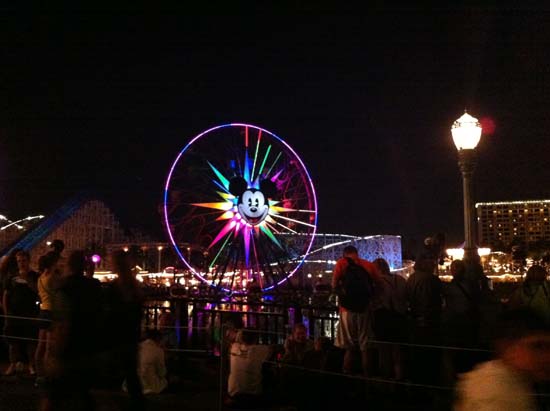 So that was Bobs 42nd birthday, full of fun! Next up is our 14 year Anniversary in September, better get planning 😉