Ok so since I last posted we’ve had birthday fun at Disneyland so I figured I should update with pics and details from that day. First up obviously the day started as most birthdays do with cards and presents. Bob and I don’t really ‘do’ birthdays or christmas. We get stuff when we need it, but he did get me this tea pack from work. I’ve been big into herbal teas lately so it was nice to see he noticed 🙂 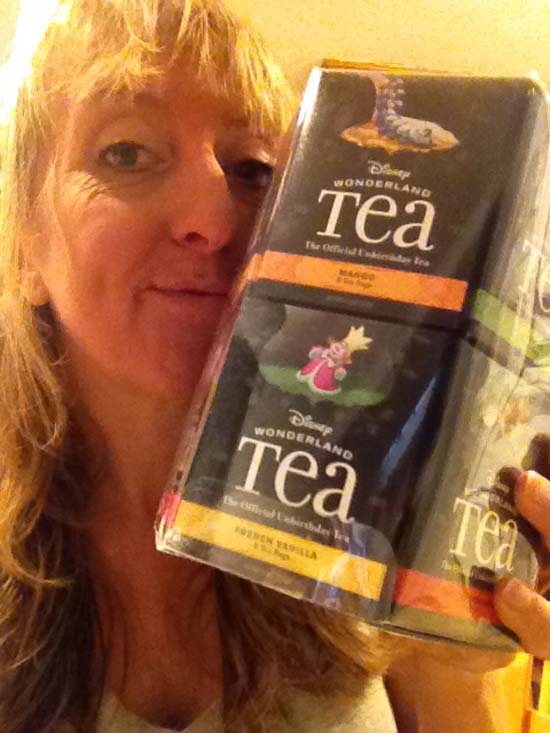 It’s the Mad Hatters Unbirthday tea! Funny little quips too. Very fun! After breakfast and walking the dogs we got ready and set off for Disneyland. Not before filling the car up with gas though… under the watchful eye of Sky! 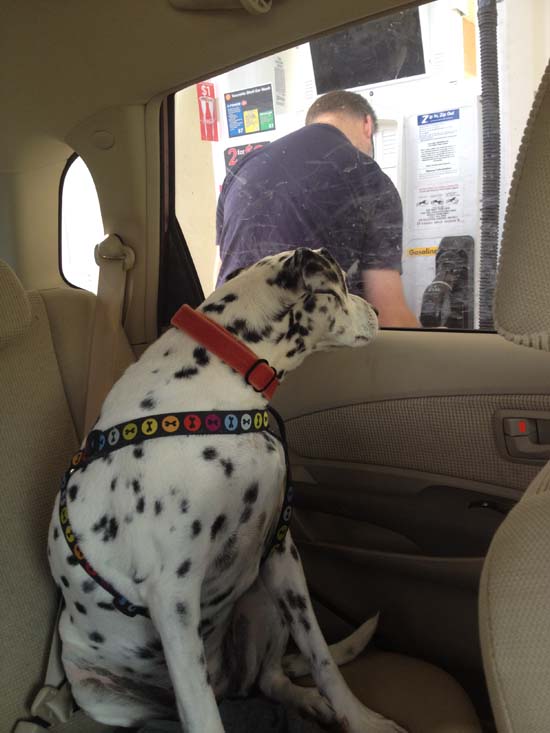 Initially she whined a little on the drive but soon settled… 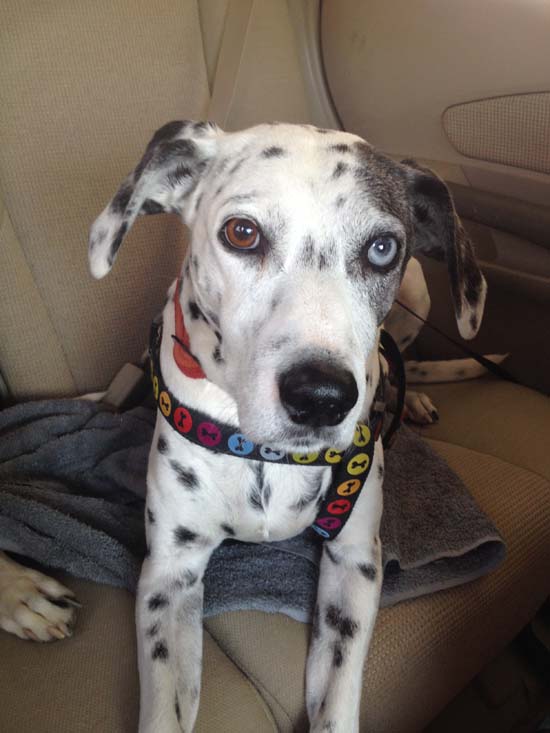 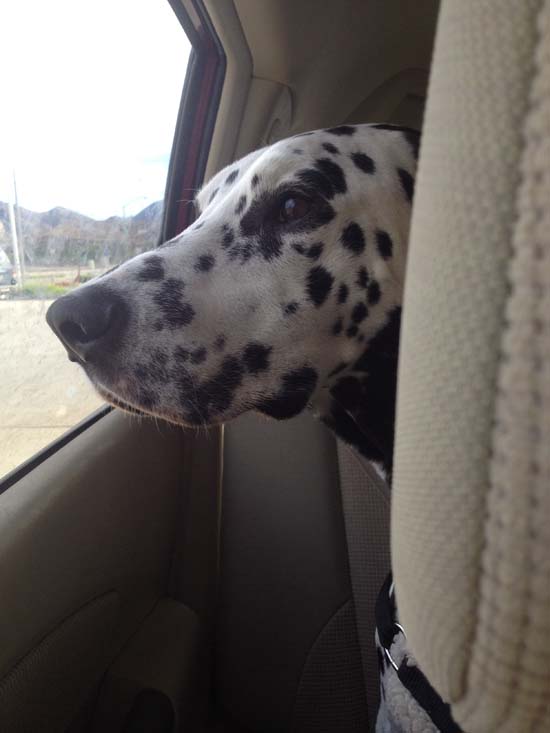 When we got to the park we walked the dogs to the kennel and got them settled then headed off to Disneyland and Carnation Cafe on main street for lunch. The drive down had worked up an appetite for us both. 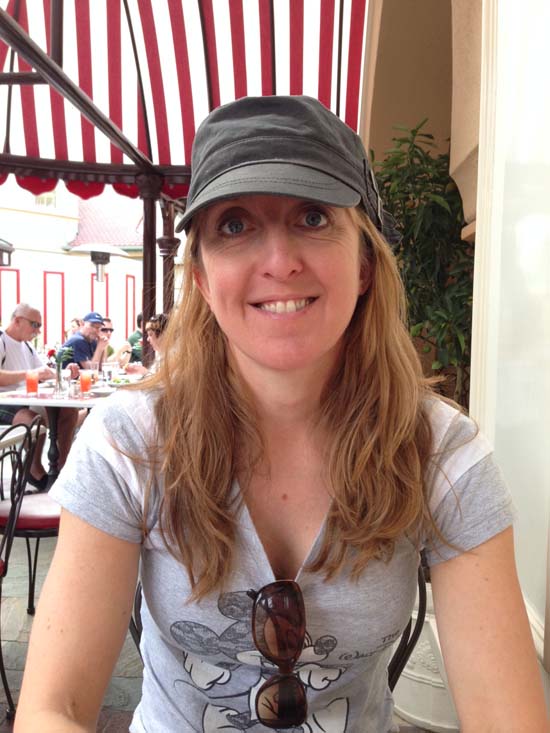 I’d researched ahead of time for vegan options in Disney and they are scarce. However this is the one place in Disneyland you can find a VEGAN burger. So we both ordered that. It came on a wholewheat bun and fries. 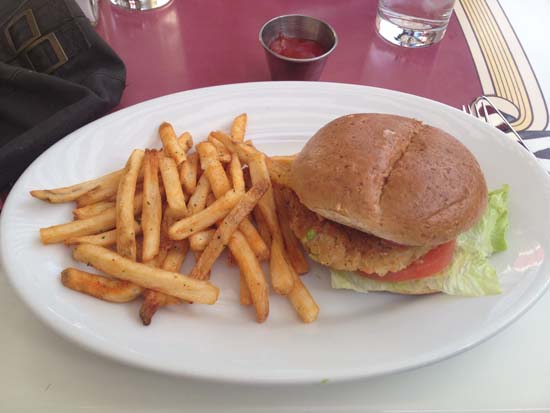 Gotta say it wasn’t the best tasting burger but hey it was better than fruit or a garden salad! The patty itself was kinda mushy. We had it with water and our cast member discount thanks to hubby 😉 So really the trip didn’t cost us much at all, other than gas, dog boarding and food/drinks. 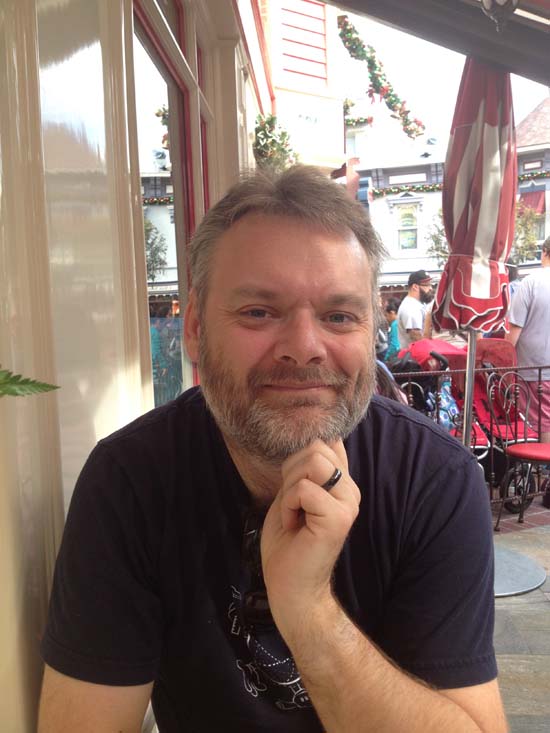 After lunch we headed to rides, only to find that 3 of our favorites were broken! Haunted mansion, Indiana Jones and Buzz Lightyear all out of action. So instead we park hopped to California and went on the California Screamin’ rollercoaster, short wait which was great! After whizzing around we settled in for Mickeys fun wheel. Neither of us had been on it before, it was fun, great views! Go on the MOVING chairs if you go 😉 After rolling around we headed to Cars land and went on Mater’s Junkyard Jamboree. Another new one for us, and enjoyable! We then went on Luigi’s flying tires before grabbing a drink and heading back to check on the dogs. 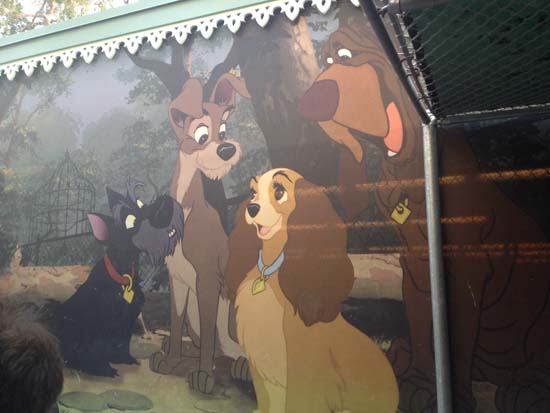 We’d already fed them when we arrived so they just need a potty break which we figured we could do in the enclosed area of the kennel, which is lady and the tramp themed. It’s a fair size run, concrete floor with benches to sit on and fire hydrants for the dogs to pee up. 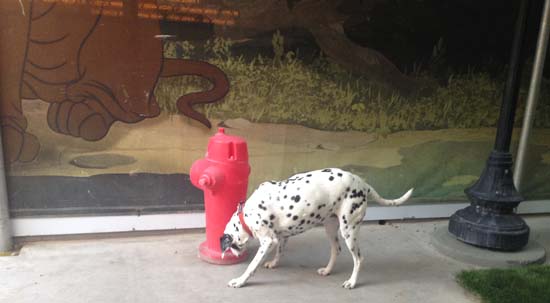 Pixel peed up everything of course. The Fire hydrants, the “streetlight”, the fence… but Sky was having NONE of it. 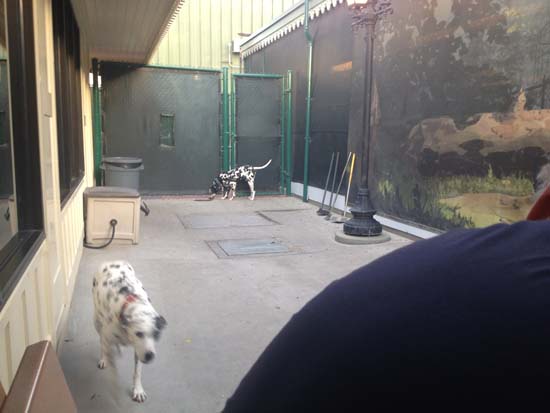 She wanted a proper walk so we took them on the walk to the parking lot and back. Two Dalmatians at Disneyland get LOTS of attention so it takes longer than you’d think. Especially with Pixel wanting to meet EVERYBODY! 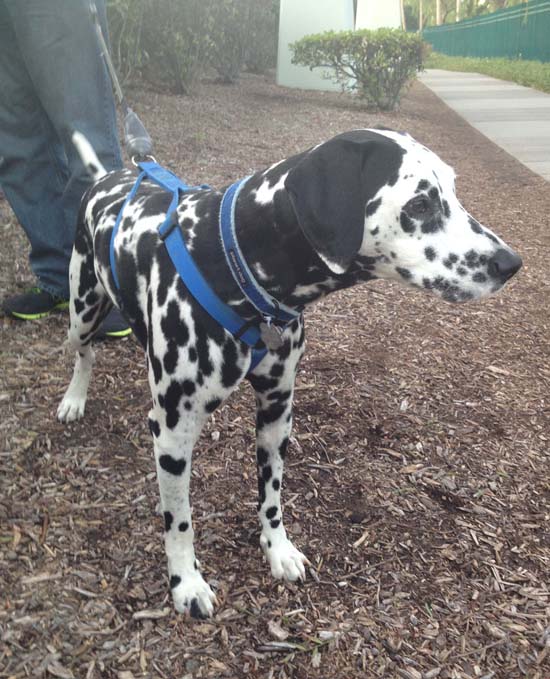 Who wouldn’t want to meet this guy though? He got PLENTY of fuss Monday let me tell you! After a potty break we put the dogs back in their kennels, and gave them a snack. Homemade biscuits! 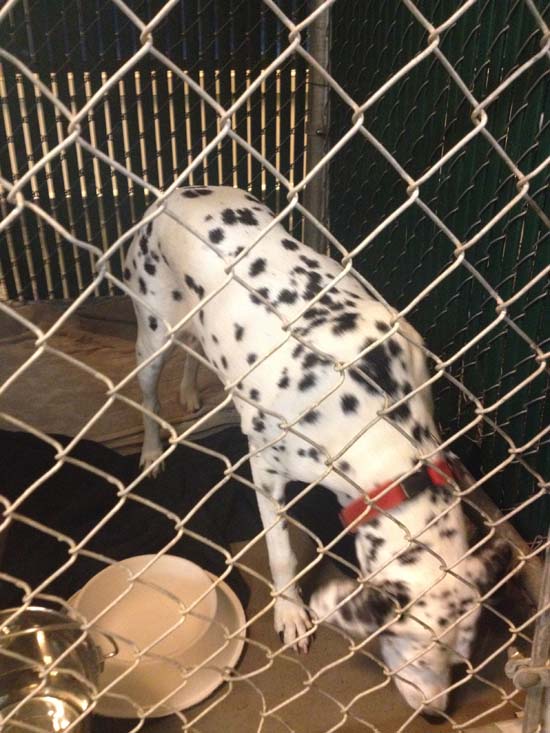 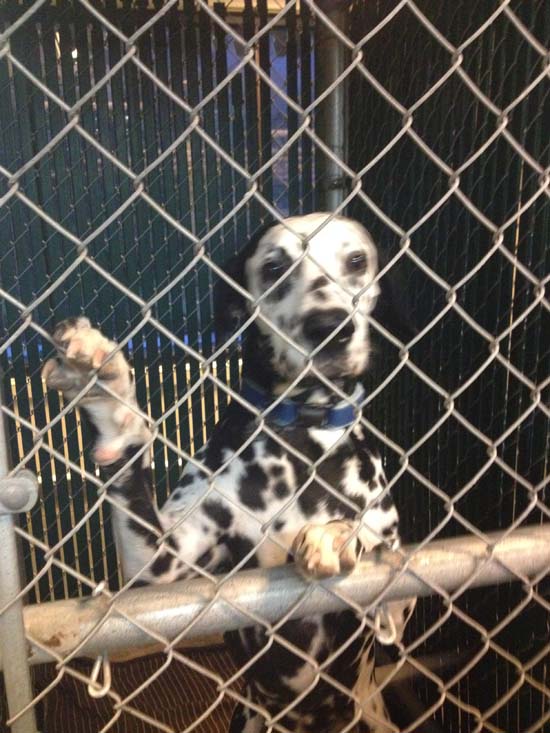 But I loooooove you, don’t leave me here! I want to come to Disneyland! Sorry buddy they don’t let dogs in! We made a dinner reservation at Rainforest cafe then we popped back into Disneyland for some more rides. We went on Haunted Mansion, which was decked out Nightmare before Christmas theme. It’s my FAVORITE ride at Disney at this time of year. The regular haunted mansion is ‘meh’ but nightmare before christmas haunted mansion ROCKS!

We headed to Buzz Lightyears Astro Blasters afterwards, which is another favorite of mine. One thing I LOVE about this ride is that you get to email your photo to yourself afterwards! They should ALL do that! Much easier and free! 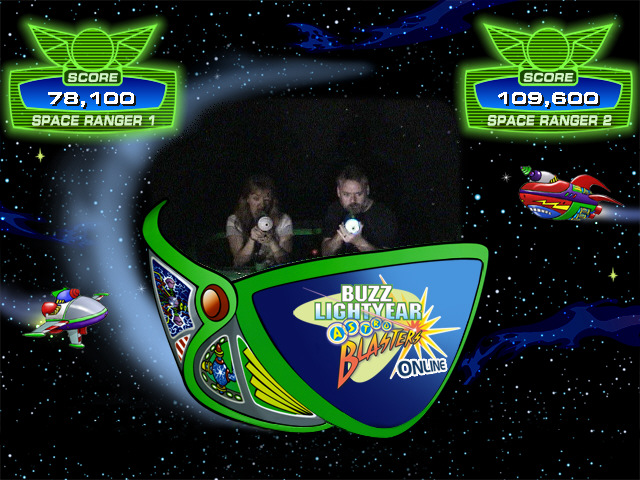 One thing I love about Disney is they put a lot of thought into the people waiting in line. We had a line outside which was boring but inside it was all Buzz themed, always something to look at. 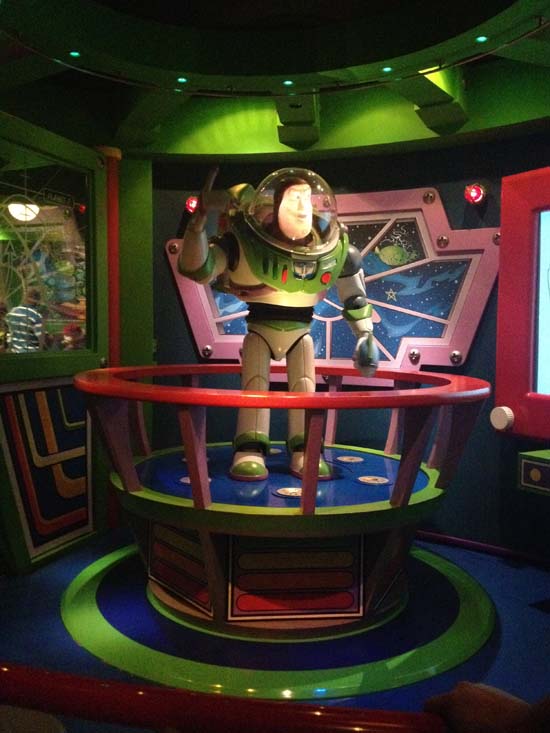 When we were waiting for Buzz we looked over at Star Tours and I commented I hadn’t been on it so that was our next call after Buzz. The line said 35 minute wait, BUT as we were getting in line a guy handed us two fast passes that expired in 5 minutes as they couldn’t use them! SCORE! So we headed to the fast pass line and were on the ride in 5 minutes rather than 35! Thanks dude! I have to say I would have been annoyed had I waited 35 minutes for that ride, it was blah. Though Bob kindly modelled a hat in the store afterwards which more than made up for the sucky ride. 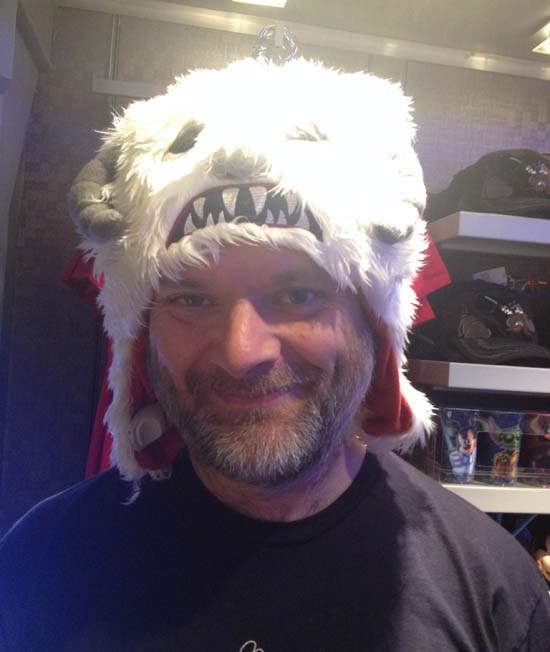 By the time we left Star Tours it was time for dinner so we headed out to Rainforest Cafe in Downtown Disney, where we had ANOTHER vegan burger. Like I said options are few for Vegans at Disney… but it was food and we got to have a birthday beer! 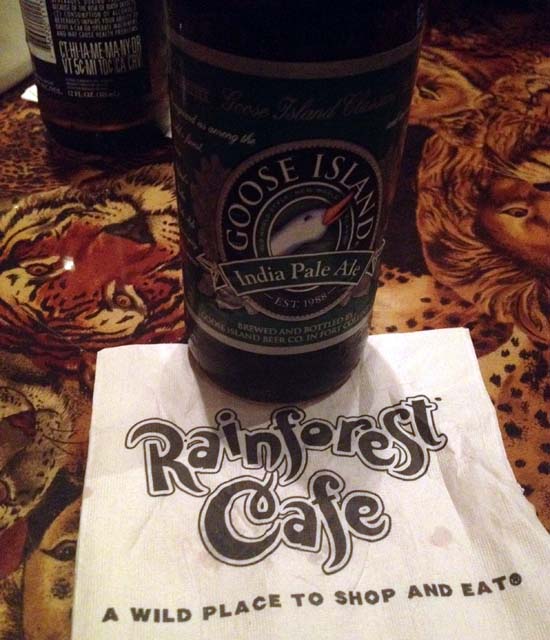 They no longer have the vegan burger on the menu at this location but if you ask for it, they DO have it. So ask people! We need to get this BACK on the menu, along with other vegan options! I’d love a Veggie Grill, or Natural Cafe in Downtown Disney! The need for a decent vegan restaurant there is HUGE! 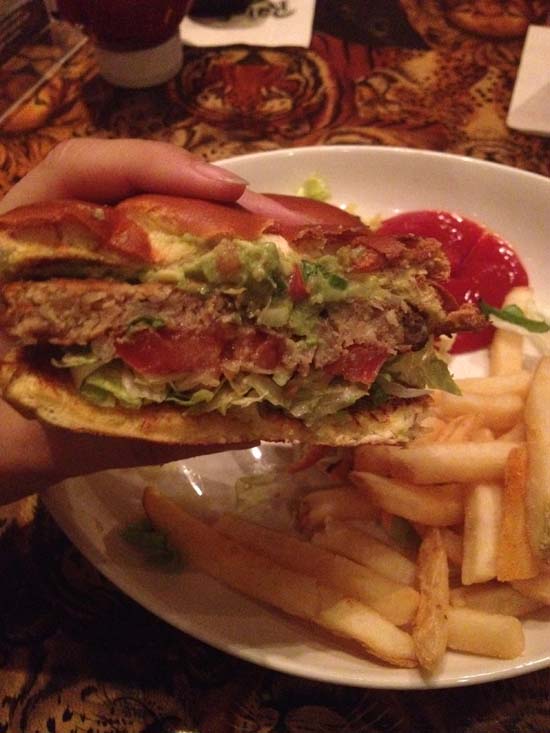 I enjoyed the burger. This one has more substance, mostly from chick peas. Honestly though we’d walked so much it could have tasted of cardboard and I would have eaten it 😉 On the way out we bought some beer glasses which were $1 each on sale, but we bought 12 and got 12 free!!! Essentially making them 50c each! Bargain! After eating we got the dogs and headed home. The dogs were POOPED! All the attention and fuss I guess, they got in the car and after 10 minutes both curled up and went to sleep 🙂 When we got home we played with them, fussed them and then we all went to bed, the end.

All in all a decent birthday and WAY better than last year. I’ve been buying myself a few things this week as treats and I’ll post more on those as I use them and review them. We are thinking of a multi day trip to Disney in the future maybe February so I’ll be posting about Disney again soon maybe!!!