Have you ever got a deal that was so good that you just couldn’t pass up? That was us last November when we checked out the Cyber Monday deals on flights to the UK. Which is why in August we found ourselves traveling back to the UK, just 18 months after our last visit. I have a plans to post about our trip, including museums, galleries, castles, and tons of British vegan food, but today I figured I’d start with the beginning of the trip the flight. Specifically the Air New Zealand vegan inflight meals.

*Disclaimer: this post may contain affiliate links, which means that if you click on one of the product links, I’ll receive a small commission. This helps support the channel and allows us to continue to make videos like this. Thank you for the support! 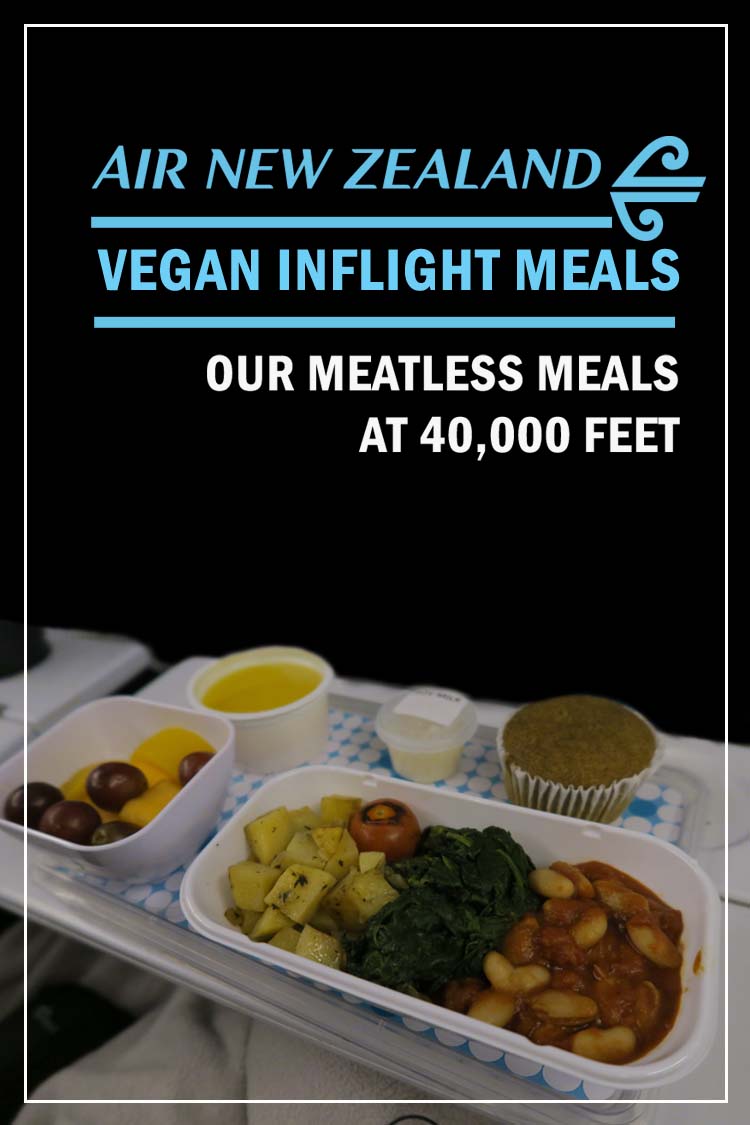 Back to the UK

When we traveled to the UK in 2016 I did a quick review on the Air New Zealand vegan meals and figured this would be a great opportunity to follow up and see how the meals had improved. Firstly I want to say that we love flying Air New Zealand. Honestly, they have the BEST inflight entertainment. Lots of movies, TV, and music to choose from and you can order drinks and snacks from your touch screen. So convenient. Plus the staff are always really friendly. We definitely wholeheartedly recommend them. 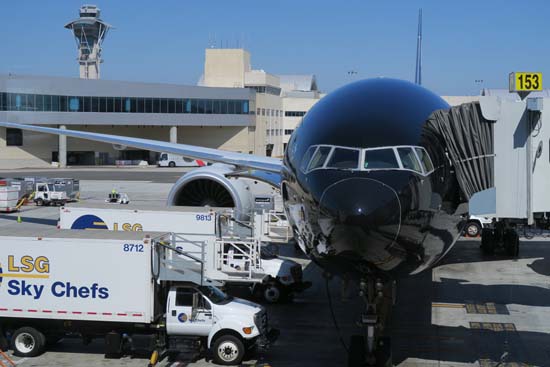 First let me just say that 10 days prior to us flying Bob called them to change his meal preference. When we booked last November he was vegetarian, as of 2 months ago he’s 100% vegan! I am over the moon that Bob has committed to a fully cruelty free lifestyle, and Air New Zealand were more than accommodating for his switch from lacto-ovo veggie to vegan. We lucked out bigtime on the way to UK as we had 4 seats to ourselves! So as soon as we  took off I spread out onto the next seat giving us a little more room each. Score! The first movie I watched on the flight was Kong Skull Island. I was pleasantly surprised with this movie, the story was enjoyable and I liked the message, and special effects. Definitely not like the original, which I appreciated. While I was finishing up this movie dinner arrived! 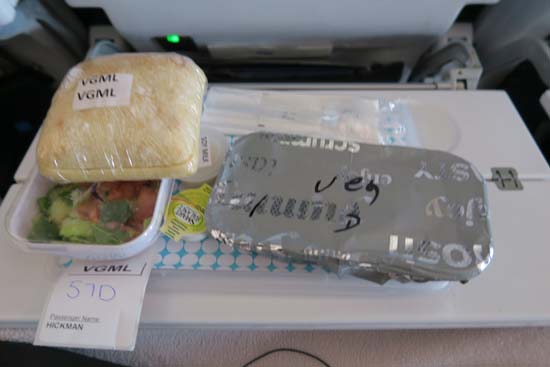 VGML indicates it’s for vegans or pure vegetarians, and contains strict vegetarian foods with no dairy or egg products. Air New Zealand also offers many other special diet options including gluten free, diabetic, lacto ovo, and even fruit only. One of the great things about having a “special meal” is that you get yours before the regular food service. Now this does mean you may wait a little between meal and the clean up or drink service. My meal came and though they never look appetising at first they can be displayed in a way to make them a little more appealing to the eye. 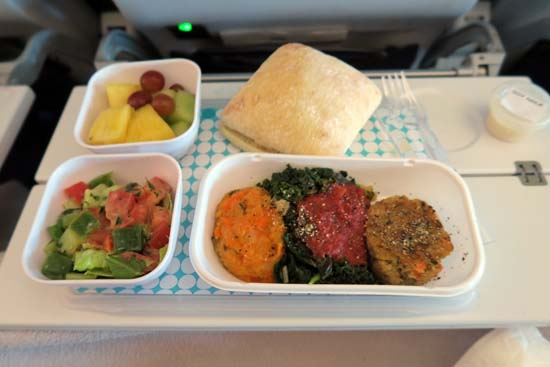 Dinner was a veggie patty with kale, marinara sauce, and mashed veggies. Side dishes included a side salad and bread roll with spread. For dessert there was a small fruit salad bowl of melon, grapes and pineapple. In addition you receive a small container of milk which I assume was for hot beverages? Honestly this was really tasty and I ate every single bite. Bob was not a fan of the melon, or salad so I traded him half a bread roll for more veggies and fruit. 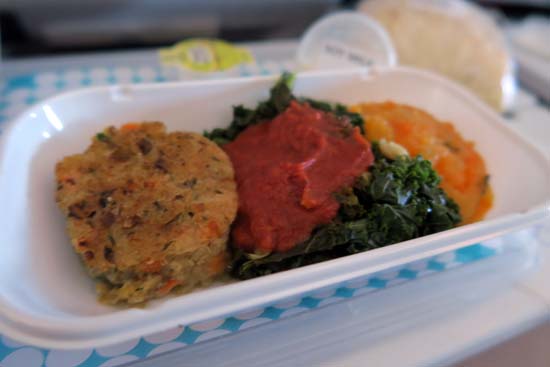 To compliment dinner we had a Steinlager New Zealand beer while settling in for movie #2, which was Ghost in the Shell starring Scarlett Johansson. This was a pretty good movie, with some really good action and CGI. As a sci-fi geek I enjoyed this one a lot. Hot beverages had been served but I was beginning to feel thirsty so I pinged the flight staff (via my entertainment touch screen) for a soda. After Ghost in the Shell, I was at a loss for what to watch next… I tried Batman vs Superman, and Snatched, but neither seem to satisfy. My craving was for action so I tried Assassins Creed. This movie hit the mark, with a big bulls eye for action, story, and eye candy. Just as I was getting fired up into Assassins Creed, morning food service commenced. 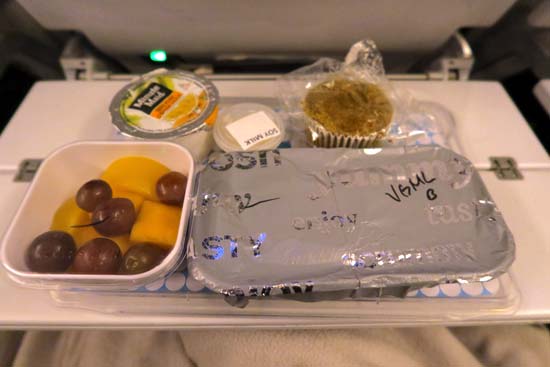 Our flight was a red-eye, landing at 11.30am GMT, which meant it was breakfast time in the UK, as such a cooked breakfast was served. For for vegans this was potatoes, spinach, tomato and beans. Side dishes for breakfast included fruit, orange juice and a muffin. The Air New Zealand Vegan breakfast was a big hit for me. I literally ate everything on this tray. Every last morsel. Plus because Bob doesn’t like melon or grapes I got to eat his fruit too. 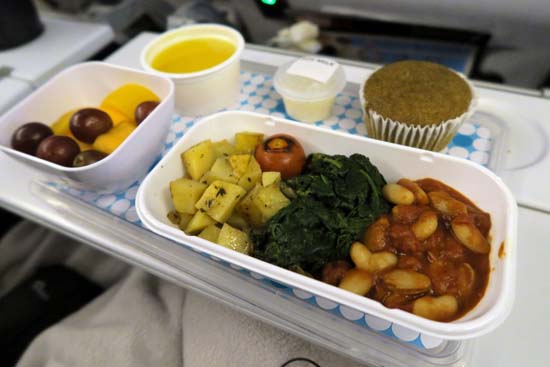 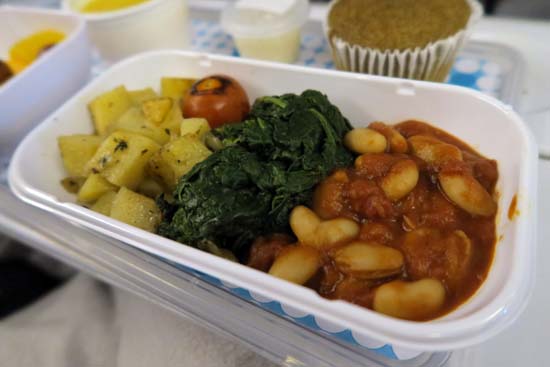 Breakfast was tasty, and while I settled into my final movie of the flight I had another cup of tea . Along with new movie releases Air New Zealand offers some classics, animation, Disney, documentaries, TV series and so much more. If you’re looking to watch all the Harry Potter Movies why not do it while flying 40,000 feet in the air? Sounded like a plan so I flicked on Harry Potter and the Sorcerer’s Stone. It had been so long since I watched this that I thoroughly enjoyed it.

In fact I enjoyed it so much, on the way back to the U.S. I’d continued to watch the next movie in the series and see how far I could get. As soon as we boarded I hit play on Chamber of Secrets, which I thoroughly enjoyed. If you haven’t seen the series in a while it’s really fun to rewatch, consecutively makes it all the more fun. Before I knew it it was time for food service. Dinner was tofu, with mushroom pilaf, and mixed veggies in tomato sauce. On the side we some salad vegetables, and a bread roll with spread. The meal also came with a small serving of raisins and an Alpro chocolate pudding. 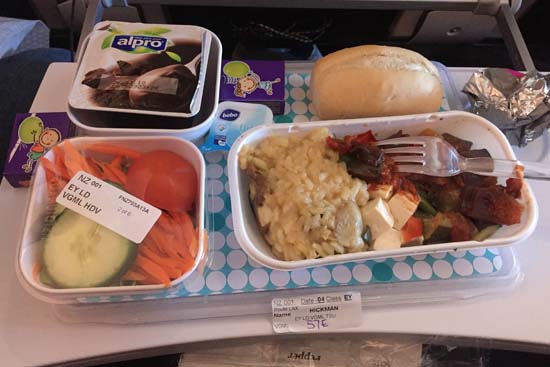 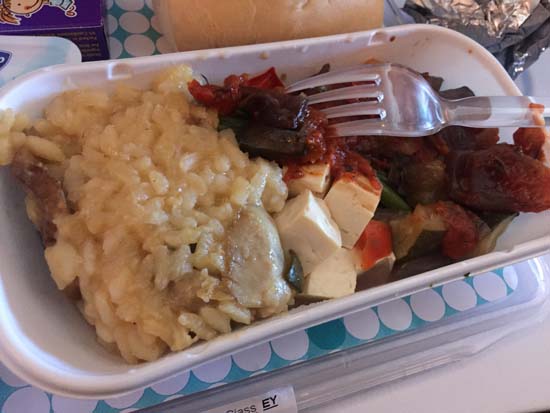 Again the beverage trolley came around and I had Steinlager while starting The Prisoner of Azkaban. I will freely admit that when I was watching The Goblet of Fire I ordered another Steinlager through the touch screen. My Harry Potter marathon was going strong. Flights back to the US are always weird. We took off at 4pm, but due to time zones landed in the US at 7.30pm. So our next meal was supper/light snack. 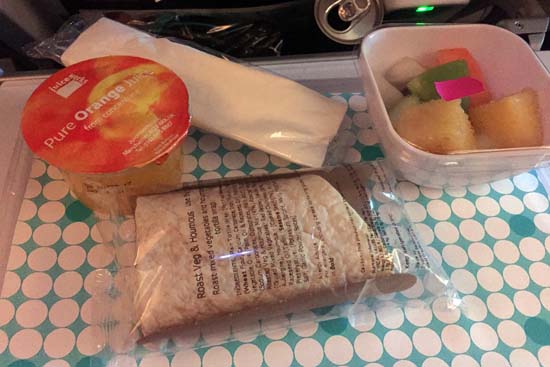 I will say that this was the most dissapointing meal of the trip. The roast veggie and hummus wrap was super oily and not that enjoyable. The orange juice was nice to wash it down and cleanse the palatte. The fruit was melon, apple and pineapple. I ate it all except the apple which was SUPER tart. Like sucking on a lemon tart, Of all the food and drink service we’d had this last one was a real disappointment honestly. Lacking in flavor and substance. I consoled myself with more Harry Potter, and got through half of The Order of the Phoenix before we landed back in LAX. 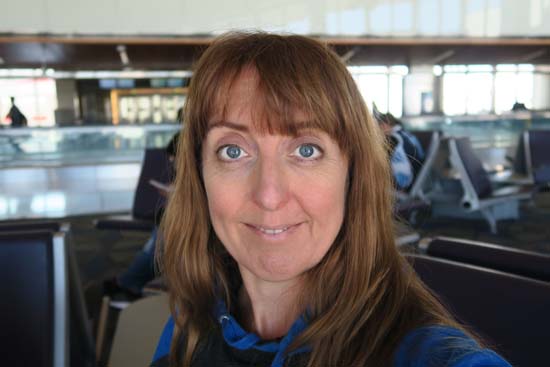 So rest assured if you are vegan you can get a decent meal on a plane. Now the airport terminals themselves may be another question entirely, but we tend to pack food ahead while we’re in the departure lounge. If you’re unsure about your trip then plan ahead. Take some bars and pre-packaged food to eat. Definitely if you fly Air New Zealand vegans can rest assured they are going to be fed well!

What do you think of inflight meals?

Have you flown Air New Zealand?

Where is your vacation destination for 2018?