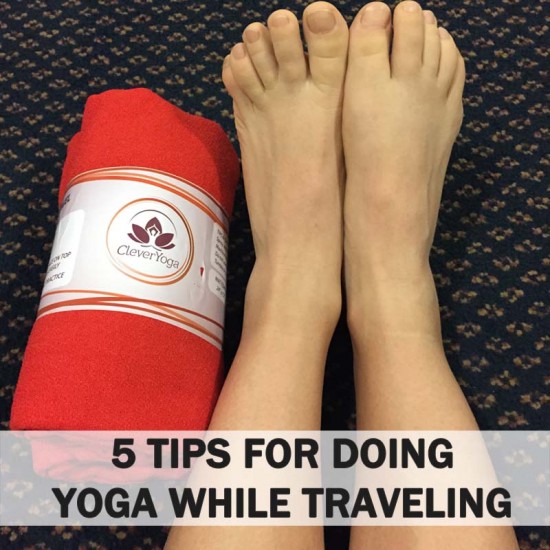 As I was living out of a hotel for five days I thought I’d share my favorite tips for doing yoga while traveling. It can sometimes be tough to get a daily yoga practice in at home and even tougher to do yoga when traveling. Trust me, I feel ya! However I’ve done yoga in a yoga studio, gym, at home, poolside, in a parking lot (yes seriously), hotel rooms and at the park. Really there isn’t much of an excuse to NOT get your downward dog on! So here are my top 5 tips for yoga while traveling:

Leave the mat at home, grab a towel

Sounds obvious but mats not only require baggage space but they are bulky SOB’s! When I traveled to IDEA WORLD and Blogfest I left my yoga mat at home and instead just packed a yoga towel. Yes these are originally for putting on top of your yoga mat but who said you had to use a mat? Just packing a yoga towel means it can also double as, well, a towel. It’s not rocket science people! Stuck for a towel to put on your poolside lounger? BAM. Plus this yoga towel by Clever Yoga comes with a free smaller hand towel too. Bonus! Disclosure:  It’s always my policy to make you aware… I received this product for free in exchange for a fair and honest review. 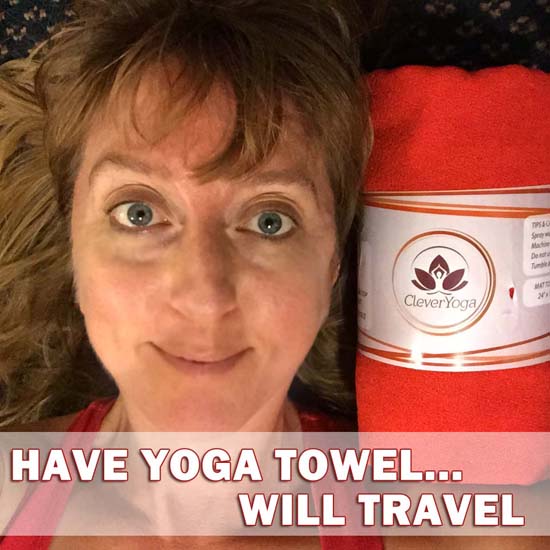 Check out the local studios

Yoga studios are pretty much everywhere these days, and almost all will offer a drop in rate. Think of yourself as a yoga tourist. Maybe it’s a local gym that offers yoga  classes and you can get a free pass? This is also a great time to try something new, maybe it’s hot yoga, yoga outdoors, or on a rooftop? There are so many types of yoga these days you’d be hard pressed NOT to find something nearby. At the IDEA convention I had two yoga workshops and took my yoga towel with me to each session.

Opt for the bigger hotel room

Ok this one might just be me, but I like a lot of room. When I stayed at the Ritz Milner Hotel last week instead of staying in the smaller room I chose to get a suite… just because it had a nice big open area that would be great for my daily yoga practice. It was a big enough space that I could comfortably do my practice without breaking the budget. I’d rather stay at a lower quality hotel and get more room to move around. Failing that I could have done yoga in the lobby I guess haha. Plus if I paid up front I would only pay $15 extra per night. The suite really is nice too btw. 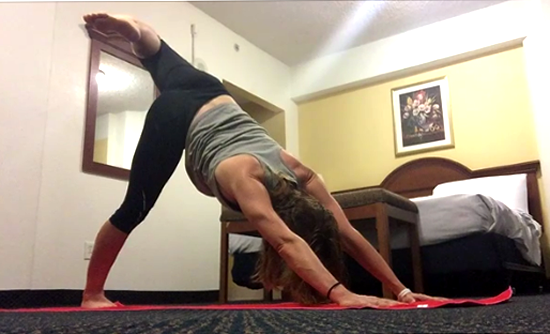 Unless you have a good consistent daily practice now is NOT the time to go solo. Instead look at apps for your iPhone or iPad that stream yoga classes. You can find these in varying price ranges, including some that are free. They also come in varying time durations and abilities so you’ll be sure to find something to fit your yoga needs. These make yoga really accessible for newcomers to the practice. There are also youtube videos for yoga practice so you are sure to find something “in case of an emergency” but remember these apps may need internet, so make sure you have hotel wi-fi or lots of bandwidth on your phone.

Give yourself a break

Sometimes life happens. You spend the hours of 8-6 doing Zumba training. You get back to your hotel and quickly shower and change for dinner with a friend you haven’t seen for 15 years, since you moved to America. You get back to the hotel and spend an hour chatting to your family on skype and then remember… YOGA! Stop stressing. Breathe. The world won’t stop if you miss a day of your practice. Your hamstrings won’t seize up because you didn’t do a downward dog today. Sleep and see how you feel in the morning. Remember that we need to live in the moment.

What’s your favorite way to practice yoga while traveling?