2 years ago Golds Gym (Los Angeles) launched the Les Mills programs BodyPump and CXworx to it’s gyms. I’ve been fortunate to be part of this launch and subsequent quarterly relaunches and every year I go back and do the original release that started it all for us which means this week I will be doing BodyPump 78 and CXworx 3! I wrote last year about the 1 yr anniversary and my feelings and experience during that time, and I thought I’d update one year on.

As I mentioned in my post last year BodyPump DEFINITELY works! Currently I’m teaching bodypump 3 times a week and cxworx twice a week… and this year we launched another Les Mills program BodyCombat which I teach once a week.  Of all three programs though BodyPump will always be my firm favorite, then cx and combat coming in #3. I think it’s just the comfort I have with the class, it’s what I KNOW and LOVE so weight training will always be my favorite workout. 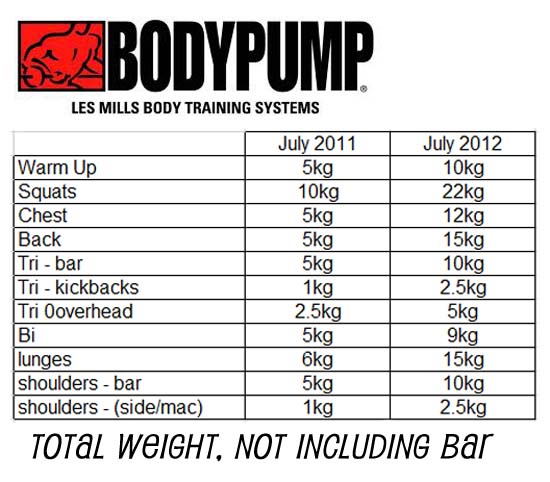 Looking at  my weights in 2011 and 2012 I can see that not much has changed in the last year as I think endurance wise I’m currently at my max. The ONLY track I increased weight is chest which is up to 15kg depending on the release we do. Same with Triceps, heavier for tricep press only. I think the other thing is that my own weight workouts have dwindled over the last year, and that’s something I need to get back to. For about 8 months the only weights workout I’ve done are bodypump classes and I need to reintroduce split training and get some more strength built.

BodyPump has definitely changed a little over the last 12 months and I’ve seen a turn away from weighted lunges and more into raising the heart rate with compound movements and plyometrics. I was overjoyed to see the chest flye in release 86, finally something different! There have also been tracks in all releases that just haven’t been my thing so I drop them as soon as I’m able but I tend to love the hard tracks so my ‘favorite playlist” is pretty tough! 😉 I’ve also been happy so see some circuit style training in the shoulder and tricep tracks. They make more sense and keep the heart rate up!

CXworx has been evolving so much since the first release. Back in release 3 we never used plates… so huge difference and opening more options with the plate. I will say like Bodypump (and combat) there are tracks I just plain dislike, whether the movements, choreography or song and again I ditch those post launch.

So what’s changing in the next year? Who knows? Honestly I’ve given up trying to guess what’s coming next. I know that the new releases are on their way to me (bodypump 87, cxworx 12 and bodycombat 57) so I’ll see what they change this relaunch. Mostly though I’ll be looking at some OLDER releases I have and learning some of those too. For me it’s always about the music and choreography and how well the two go together so that’s MY focus for the class, and educating people as to form and technique. That’s been the main change for me over the last year is taking a move each class and breaking it down totally and reminding people of modifications. Plus I have to ensure I know all the songs to sing along 😉

BACK TO THE BEGINNING

Have fun this week!